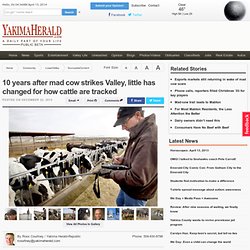 Click to Watch Attached Video → His house and office sit on a hill above the milking parlor, birthing pen and calf sheds. Mad cow disease warning for Australian beef. A lot to lose: Mad cow disease would hurt Aussie producers more than those in the US. 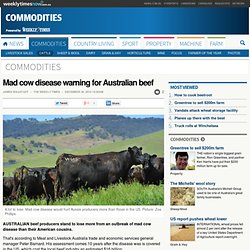 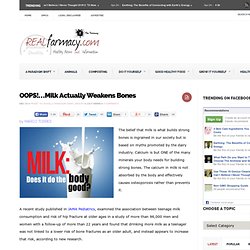 This is totally false. BSE infected cattle have prions in saliva - health - 07 December 2012. ROGUE proteins responsible for mad cow disease have been discovered in the saliva of cows infected as part of an experiment. 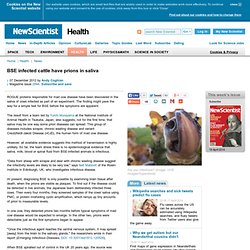 The finding might pave the way for a simple test for BSE before the symptoms are apparent. The result from a team led by Yuichi Murayama at the National Institute of Animal Health in Tsukuba, Japan, also suggests, not for the first time, that saliva may be one way some prion diseases can spread. This group of diseases includes scrapie, chronic wasting disease and variant Creutzfeldt-Jakob Disease (vCJD), the human form of mad cow disease. However, all available evidence suggests this method of transmission is highly unlikely. So far, the team stress there is no epidemiological evidence that saliva, milk, blood or spinal fluid from BSE-infected animals is infectious. At present, diagnosing BSE is only possible by examining brain tissue after death, when the prions are visible as plaques. 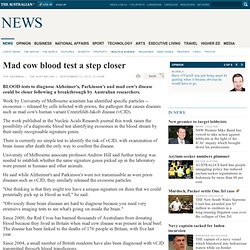 Work by University of Melbourne scientists has identified specific particles -- exosomes -- released by cells infected with prions, the pathogen that causes diseases such as mad cow's human variant Creutzfeldt-Jakob disease (vCJD). ‘Mad Cow’ Detectable Earlier in Autonomic Nervous System. Prions responsible for bovine spongiform encephalopathy are detectable in the autonomic nervous system before the central nervous system, according to a study published online July 11 in The American Journal of Pathology. 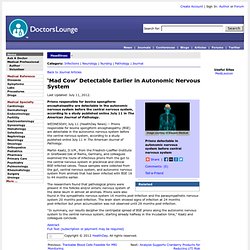 ‘Mad cow’ disease can affect autnomic nerves early. Researchers Achieve Breakthrough in Prion Disease Treatment. Researchers from Linköping University in Sweden, in cooperation with colleagues from the University Hospital of Zurich in Switzerland, have developed self-illuminating polymers with the ability to home in on toxic prions and render them harmless. 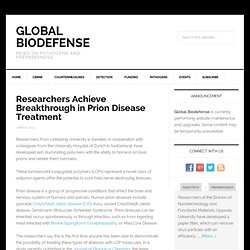 Prion illnesses can be inherited, occur spontaneously or through infection, such as from ingesting meat infected with Bovine Spongiform Encephalopathy, or Mad Cow Disease. Purified and synthetic Alzheimer’s amyloid beta (Aβ) prions. Author Affiliations Contributed by Stanley B. 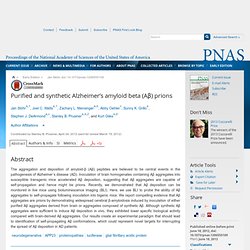 Prusiner, April 24, 2012 (sent for review March 15, 2012) Abstract The aggregation and deposition of amyloid-β (Aβ) peptides are believed to be central events in the pathogenesis of Alzheimer’s disease (AD). Inoculation of brain homogenates containing Aβ aggregates into susceptible transgenic mice accelerated Aβ deposition, suggesting that Aβ aggregates are capable of self-propagation and hence might be prions. Dementia Progress Predicted By New MRI Technique. Rabbits are not resistant to prion ... [Proc Natl Acad Sci U S A. 2012. PrP Canada – Canada’s Prion Research Conference. The Catalytic Redox Activity of Prion Protein–CuII is Controlled by Metal Exchange with the ZnII–Thiolate Clusters of Zn7Metallothionein-3 - Meloni - 2012 - ChemBioChem.

Mad Cow Disease: Holstein With BSE Was Euthanized After Going Lame. FRESNO, Calif. — The California dairy cow found to have mad cow disease was very old for a milk producer and had been euthanized after it became lame and started lying down, federal officials revealed in their latest update on the discovery. 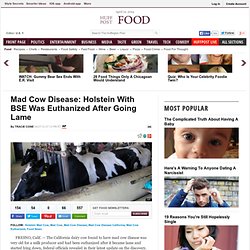 The 10-year-old dairy cow, only the fourth ever discovered in the United States, was found as part of an Agriculture Department program that tests about 40,000 cows a year for the fatal brain disease. It was unable to stand before it was killed and sent to a rendering plant's Hanford, Calif. transfer station. It was one of dozens that underwent random testing at the transfer site, and the positive results have set off a federal investigation into the source of the disease. U.S. health officials say there is no risk to the food supply. Bovine spongiform encephalopathy. Image of a cow with BSE. 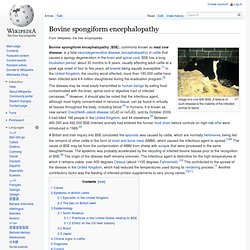 A feature of such disease is the inability of the infected animal to stand. Bovine spongiform encephalopathy (BSE), commonly known as mad cow disease, is a fatal neurodegenerative disease (encephalopathy) in cattle that causes a spongy degeneration in the brain and spinal cord. BSE has a long incubation period, about 30 months to 8 years, usually affecting adult cattle at a peak age onset of four to five years, all breeds being equally susceptible.[1] In the United Kingdom, the country worst affected, more than 180,000 cattle have been infected and 4.4 million slaughtered during the eradication program.[2] Cause[edit] Early Chronology of the Hereford Breed 1723-1955. Death of R Tomkins May 6th. Benjamin Tomkins (The Elder), born 1714 succeeds under his father's will to the cow Silver with her calf. Benjamin (The Younger) takes Blackhall, Kings Pyon.

At this time father and son occupied four farms, together 840 acres. Herefords introduced into Co. Westmeath, Ireland, by Mr Richard Reynall. William Galliers of Wigmore Grange died, aged 66, his herd passing to his son, John Galliers; his other son, also William, became a famous breeder of Herefords, winning thirteen cups for his cattle from the Hereford Agricultural Society between 1802-1815. Mad cow disease found in one Central Valley bovine. FRESNO — The first confirmed case of mad cow disease in the U.S. since 2006 surfaced in California's Central Valley on Tuesday, triggering concerns about food safety. But health officials stressed that the diseased animal never entered the human food chain and that U.S. beef and dairy products are safe.

The diseased cow "was never presented for slaughter for human consumption, so at no time presented a risk to the food supply or human health," John Clifford, the U.S. Department of Agriculture's chief veterinarian, said in a statement. Mad cow disease was most famously imprinted on the minds of consumers by a massive outbreak in the United Kingdom that killed more than 150 people and 180,000 cattle. The disease can be passed to humans who eat tainted meat.

Previous scares were crippling to the cattle industry. "This is a big deal. Supreme Court strikes down California law regulating ‘downer’ livestock. The case involved swine, and Justice Elena Kagan said the Federal Meat Inspection Act is clear. FMIA “regulates slaughterhouses’ handling and treatment of nonambulatory pigs from the moment of their delivery through the end of the meat production process,” Kagan wrote.

She added that California’s law “endeavors to regulate the same thing, at the same time, in the same place — except by imposing different requirements. The FMIA expressly preempts such a state law.” California passed its law after the Humane Society of the United States released a video of “downer” livestock being shocked and dragged at a slaughterhouse. The law bans slaughterhouses from buying, butchering or selling downer livestock for human consumption and calls for immediate euthanization of the animals. FMIA, however, allows federal inspectors to determine whether a nonambulatory animal is fit for human consumption.

An inspector may then decide whether it can become part of the nation’s food supply. The U.S. Concealed Face of Prion Disease Revealed by Medical Researchers. Deadly prion disease which include BSE or 'mad cow disease', have a concealed signature, discovered Medical researchers in Canada and the United States and published their joint findings recently. Findings published this month in the peer-reviewed journal, Public Library of Science (PLoS) Pathogens, demonstrate that up to seven months before an animal shows physical signs of having a prion infection, a particular prion protein in the brain was being eradicated.