Lyme Disease - Dr Phil. How Lyme Disease and Its Treatments Work. Here’s What Happens When A Tick Bites You. When a tick bites, it does more than just stick you with the pointy end. 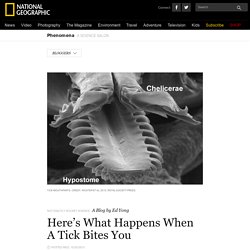 Here’s what happens, in far more detail than you ever cared to know. You can thank Dania Richter from the Charité University Hospital in Berlin, who carefully analysed the mouths of ticks, and filmed them as they fed on the ears of recently euthanized mice. The mouthparts of the castor bean tick (Ixodes ricinus) consist of three main sections. The centrepiece is a long, sword-like structure called the hypostome. It has rows of backwards-curving spines along its edges, as well as its entire bottom face.

On top of the hypostome is a pair of chelicerae—long rods that end in hooked teeth. Scientists identify potential key to Lyme disease. Researchers at UT Southwestern Medical Center have identified a protein that may help give Lyme disease its bite. 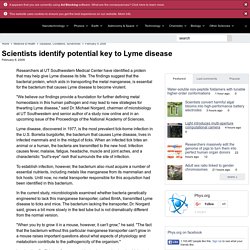 The findings suggest that the bacterial protein, which aids in transporting the metal manganese, is essential for the bacterium that causes Lyme disease to become virulent. "We believe our findings provide a foundation for further defining metal homeostasis in this human pathogen and may lead to new strategies for thwarting Lyme disease," said Dr. Michael Norgard, chairman of microbiology at UT Southwestern and senior author of a study now online and in an upcoming issue of the Proceedings of the National Academy of Sciences. 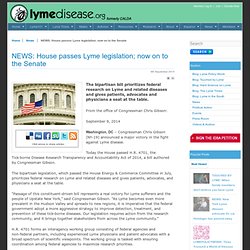 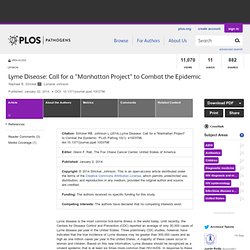 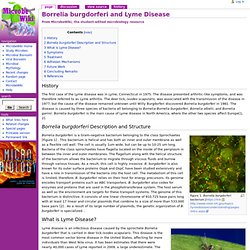 Critical Needs and Gaps in Understanding Prevention, Amelioration, and Resolution of Lyme and Other Tick-Borne Diseases: The Short-Term and Long-Term Outcomes: Workshop Report. Afflicted: Lyme disease in Vermont. Ehrlichiosis. Ehrlichiosis - PubMed Health. Life Cycle Babesia Video. Babesiosis, Tick-Borne Disease That Mimics Malaria and Can Be Fatal, Is on the Rise. <br/><a href=" US News</a> | <a href=" Business News</a> Copy Babesiosis, a potentially deadly tick-borne illness that mimics malaria, is on the rise in the suburbs north of New York City, according to a paper published in the May issue of the Emerging Infection Disease Journal. 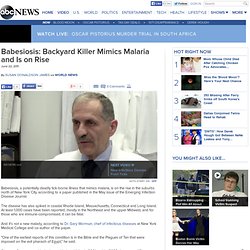 The disease has also spiked in coastal Rhode Island, Massachusetts, Connecticut and Long Island. At least 1,000 cases have been reported, mostly in the Northeast and the upper Midwest, and for those who are immune-compromised, it can be fatal. And it's not a new malady, according to Dr. "One of the earliest reports of this condition is in the Bible and the Plagues of Ten that were imposed on the evil pharaoh of Egypt," he said.

Six cases first appeared in the Lower Hudson Valley in 2001 and by 2008, there were 119 cases, according to the paper, a 20-fold increase. Most people weather the disease with virtually no symptoms or after effects -- which is precisely why public health officials are worried. Under-the-radar tick diseases spreading across U.S. - Health - Infectious diseases. Wild raspberries lured Jacqueline Moore over the wall of her new garden in Westchester County, New York. 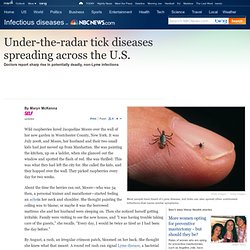 It was July 2008, and Moore, her husband and their two small kids had just moved up from Manhattan. She was painting the kitchen, up on a ladder, when she glanced out the window and spotted the flash of red. She was thrilled: This was what they had left the city for. She called the kids, and they hopped over the wall. They picked raspberries every day for two weeks. About the time the berries ran out, Moore—who was 34 then, a personal trainer and marathoner—started feeling an achein her neck and shoulder.

By August, a rash, an irregular crimson patch, bloomed on her back. It had no effect — instead, she got worse. Movie Under Our Skin - Dr Jones Kids. Watch Free Documentary Online. Why are crippling Lyme disease cases being misdiagnosed? - CTV News. David Leggett used to love the outdoors. 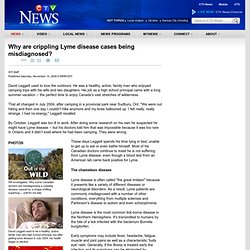 He was a healthy, active, family man who enjoyed camping trips with his wife and two daughters. His job as a high school principal came with a long summer vacation -- the perfect time to enjoy Canada's vast stretches of wilderness. That all changed in July 2004, after camping in a provincial park near Sudbury, Ont. "We were out hiking and then one day I couldn't hike anymore and my knee ballooned up. I felt really, really strange. By October, Leggett was too ill to work. These days Leggett spends his time lying in bed, unable to get up to eat or even bathe himself.