Disease in History. Primer on Public Health Population. Chapter 1 introduced the natural historyof a disease, from exposure to causal agents through to its progression and final outcomes. 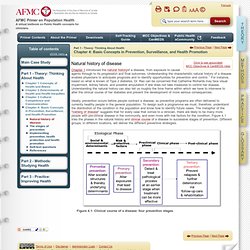 Understanding the characteristic natural history of a disease enables physicians to anticipate prognosis and to identify opportunities for prevention and control.1 For instance, based on what is known of Type 2 diabetes, Dr. Rao can be concerned that Catherine Richards may face visual impairment, kidney failure, and possible amputation if she does not take measures to control her disease. Understanding the natural history can also tell us roughly the time frame within which we have to intervene to alter the clinical course of her diabetes and prevent the development of more serious consequences. Ideally, prevention occurs before people contract a disease, so preventive programs are often delivered to currently healthy people in the general population. 12 Diseases That Altered History. Diseases and Vaccines — Timelines — History of Vaccines. The 10 Worst Disease Outbreaks & Epidemics in U.S. History. 1830-1851: Second Cholera Pandemic To this day, cholera, an infection of the small intestine, still affects between three and five million people and causes nearly 130,000 deaths a year worldwide (CDC, 2011). 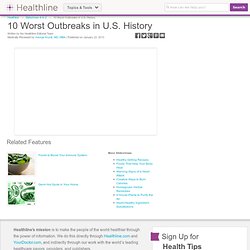 Vaccinate Your Baby : History of Disease Eradication. Diseases and epidemics. British Sign Language description Audio description 'The ideal way to get rid of any infectious disease would be to shoot instantly every person who comes down with it.' H L Mencken Humanity and disease share a long and eventful history. 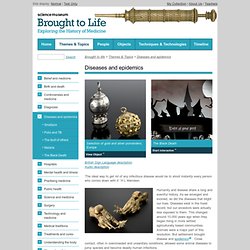 As we emerged and evolved, so did the diseases that blight our lives. Diseases exist in the fossil record, but our ancestors were actually less exposed to them. What did early people think about disease? Like their prehistoric ancestors, most Ancient Egyptians blamed evil spirits or angry gods. 7 Worst Killer Plagues in history (worst diseases, epidemics in history) Smallpox (430 BC? 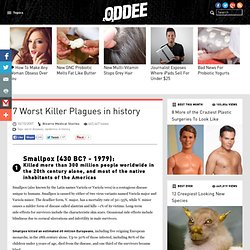 - 1979): Killed more than 300 million people worldwide in the 20th century alone, and most of the native inhabitants of the Americas Smallpox (also known by the Latin names Variola or Variola vera) is a contagious disease unique to humans. Smallpox is caused by either of two virus variants named Variola major and Variola minor. The deadlier form, V. major, has a mortality rate of 30–35%, while V. minor causes a milder form of disease called alastrim and kills ~1% of its victims. Long-term side-effects for survivors include the characteristic skin scars. Smallpox killed an estimated 60 million Europeans, including five reigning European monarchs, in the 18th century alone. Top 10 Worst Plagues In History. Health History is dotted with epidemics and plagues, but a certain number of them stand out as unique for their severity and impact on future generations. 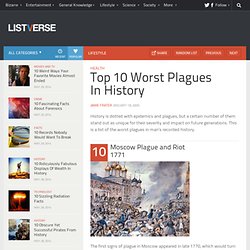 This is a list of the worst plagues in man’s recorded history. 10 Worst Epidemics. ­Few words in the English language encapsulate as much horror, misery and doom as "plague. 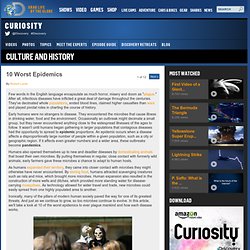 " After all, infectious diseases have inflicted a great deal of damage throughout the centuries. They've decimated whole populations, ended blood lines, claimed higher casualties than wars and played pivotal roles in charting the course of history. Early humans were no strangers to disease. They encountered the microbes that cause illness in drinking water, food and the environment. Occasionally an outbreak might decimate a small group, but they never encountered anything close to the widespread illnesses of the ages to follow. Humans also opened themselves up to new and deadlier diseases by domesticating animals that boast their own microbes. As humans expanded their territory, they came into closer contact with microbes they might otherwise have never encountered. History of Plagues. 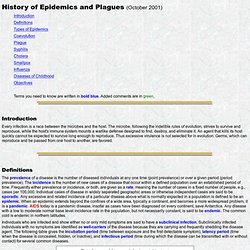 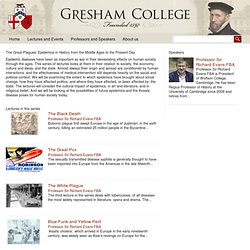 This series of lectures looks at them in their relation to society, the economy, culture and ideas, and the state. Almost always their origin and spread are conditioned by human interactions, and the effectiveness of medical intervention still depends heavily on the social and political context. We will be examining the extent to which epidemics have brought about social change, how they have affected politics, and where they have affected, or been affected by, the state.

Studying Possible Pandemic Through Three Plagues Linked To Same Bacterial Pathogen. Scientists discovered that the two most devastating plagues, the plague of Justinian and the Black Death, responsible for killing 50% of Europe, were caused by distinct strains of the Yersinia pestis bacteria. 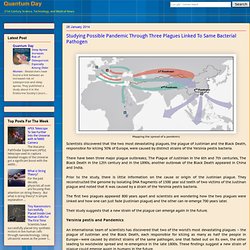 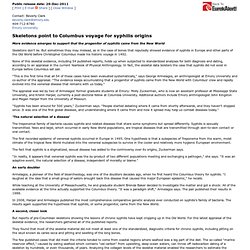 But sometimes they may mislead, as in the case of bones that reputedly showed evidence of syphilis in Europe and other parts of the Old World before Christopher Columbus made his historic voyage in 1492. None of this skeletal evidence, including 54 published reports, holds up when subjected to standardized analyses for both diagnosis and dating, according to an appraisal in the current Yearbook of Physical Anthropology. "This is the first time that all 54 of these cases have been evaluated systematically," says George Armelagos, an anthropologist at Emory University and co-author of the appraisal. "Syphilis has been around for 500 years," Zuckerman says. Medieval skeletons give clues to leprosy origins. 13 June 2013Last updated at 14:10 ET By Melissa Hogenboom Science reporter, BBC News As part of their study, scientists extracted DNA from skeletons that were 1,000 years old The genetic code of leprosy-causing bacteria from 1,000-year-old skeletons has been laid bare.