Skinny jeans wearer hospitalised with leg weakness and nerve damage. Could not load plugins: File not found How skinny jeans paralysed an Adelaide woman After helping move house, a woman from Adelaide was paralysed after her calf muscles expanded cutting off the blood supply to her legs. 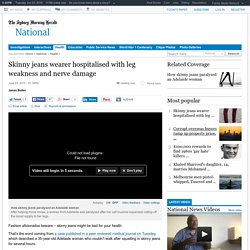 Fashion aficionados beware – skinny jeans might be bad for your health. That's the word coming from a case published in a peer reviewed medical journal on Tuesday, which described a 35-year-old Adelaide woman who couldn't walk after squatting in skinny jeans for several hours. 5 Nightmares You Don't Know Until You're Diabetic. Hey, remember when everybody was freaking out about Ebola, because of an outbreak that killed more than 10,000 people? 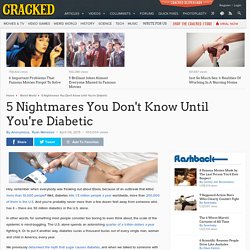 Well, diabetes kills 1.5 million people a year worldwide, more than 200,000 of them in the U.S. And you're probably never more than a few dozen feet away from someone who has it -- there are 30 million diabetics in the U.S. alone. In other words, for something most people consider too boring to even think about, the scale of the epidemic is mind-boggling. The U.S. alone spends an astonishing quarter of a trillion dollars a year fighting it. Analysis of a Toxic Death. About 8:15 in the evening on February 19, 1994, paramedics wheeled a young woman into the emergency room of General Hospital in the southern California city of Riverside. 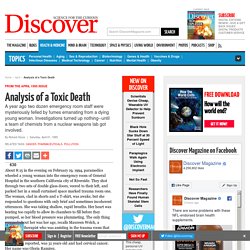 They shot through two sets of double glass doors, veered to their left, and parked her in a small curtained space marked trauma room one. The woman, clad in shorts and a T-shirt, was awake, but she responded to questions with only brief and sometimes incoherent utterances. She was taking shallow, rapid breaths. Her heart was beating too rapidly to allow its chambers to fill before they pumped, so her blood pressure was plummeting. 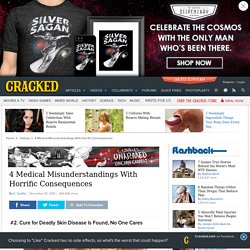 Cure for Deadly Skin Disease Is Found, No One Cares View Stock/View Stock/Getty Images In the early 20th century, a terrible disease tore through the southern parts of the United States like the disasters in an usually slow-acting Roland Emmerich movie. It was called pellagra, and it caused hideous skin lesions, dementia, and the eventual death of around 40 percent of the people who contracted it. Nobody knew what caused the illness until 1914, when a Hungarian immigrant doctor called Joseph Goldberger proposed an explanation: pellagra was caused by the poor diet common in parts of the South, where people ate mostly corn, molasses, and fatty meat. George Doyle/Stockbyte/Getty"I know, sweetie. Nearby spectators realized Goldberger was right, hoisted the man up on their shoulders, and paraded him around America.

The Horrible Consequences Wait! Goldberger tried valiantly to prove his case. Via Wikipedia"Joseph Goldberger. . #1. Ana Blazic/iStock/Getty Images. Pathogens. Woman found functioning without a cerebellum in her brain. Doctors have discovered that somehow, a woman living in China has reached the age of 24 while missing a large part of her brain. 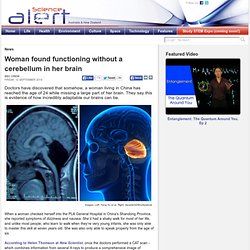 They say this is evidence of how incredibly adaptable our brains can be. Images: Left: Feng Yu et al. Right: decade3d/Shutterstock. Man with 'Walking Corpse Syndrome' believes he is dead. Photo: Getty A patient has written a disturbing account of life with a condition that makes him think he is dead - and how he spent his days in graveyards as it was "the closest I could get to death". 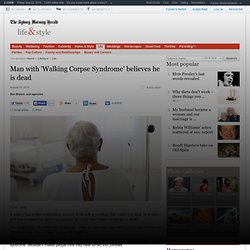 The British man, identified only as Graham, woke up nine years ago utterly convinced that he was no longer alive, even though he was still breathing. Doctors diagnosed him with Cotard’s syndrome, which is also known as "walking corpse syndrome" because it makes people think they have turned into zombies. Graham did not believe them, however, and insisted that his brain was dead. Advertisement The unusual condition emerged after Graham, who suffered from severe depression, tried to commit suicide. Changing the Face of Medicine. Biol 1406- Biology I Interactive Tutorials. Lesson 7: Pathogens and Germ Theory - S-O's Mad Scientist. Littlescientists07 - History of the Germ Theory. Insulin, Glucose and you. Infectious diseases: pathogens. There are a number of interactive features in this e-source: A glossary of terms: any word with a glossary entry is highlighted like this. 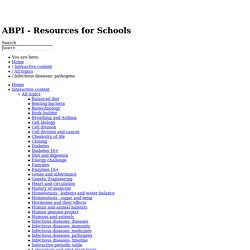 Clicking on the <acronym title='Glossary Item'>highlighted</acronym> word will open a new window with a definition of the word.Quick questions: at the end of a page/section, there is a set of quick questions to test your understanding of the scientific ideas.Animations: most of the animations can be expanded to full screen size, ideal for showing on an interactive whiteboard. The animations will play all the way through or can be viewed one section at a time.Downloads: Teachers can download individual diagrams, animations and other content from the Resource Library area of the website. Terms and Conditions apply. If you are printing from an Internet Explorer (IE) browser, please go to 'print preview' and adjust the preferred print zoom level to 85% .