The Disease They Call FAT 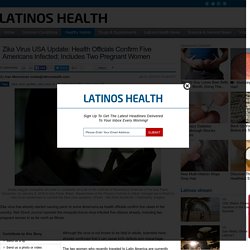 Although the virus is not known to be fatal in adults, scientists have already confirmed that it can cause birth defects and miscarriage. Federal officials unsure how much will be recouped from failed health co-ops. The Lipedema Project on Click Orlando, WKMG TV. College of Nursing, CareSpan USA Inc. announce agreement. By Mark Brown SIOUX FALLS, S.D. 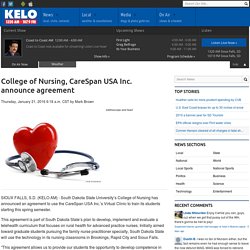 (KELO AM) - South Dakota State University’s College of Nursing has announced an agreement to use the CareSpan USA Inc.’s Virtual Clinic to train its students starting this spring semester. This agreement is part of South Dakota State’s plan to develop, implement and evaluate a telehealth curriculum that focuses on rural health for advanced practice nurses. Federal officials unsure how much will be recouped from failed health co-ops. The Disease They Call FAT is Providers Lipedema Treatment. Lipedema Treatment Diet & Exercise - The Disease They Call FAT. Managing Lipedema with Diet and Exercise KARA: I am currently in Charleston, South Carolina. 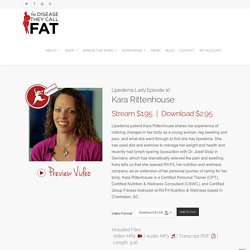 I grew up in Massachusetts, started college there, kind of bounced around, and then went off to University of Hawaii, where I finished my bachelor’s. Mental Health in America: A Crisis With Multiple Causes. In his recent executive action to curb gun violence, President Obama proposed setting aside $500 million to fund mental health programs. 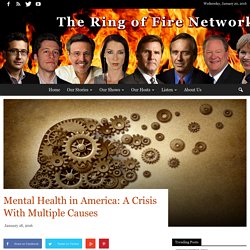 Bernie Sanders’ “Medicare for All” proposal would include access to mental health services. 58 million Americans – nearly one in four – suffer from mental illness. Yet, hundreds of thousands of them are falling through the cracks of a system that has been falling apart for decades. Entering the term “America’s mental health crisis” into an Internet search engine will return approximately 1.2 million results. Mental illness is implicated in a significant number of shootings and other acts of violence that continue unabated in the United States. The Substance Abuse and Mental Health Services Administration reports that as many as one-quarter of all homeless persons suffer from some type of untreated mental condition. 10 truths about Britain's health service. The NHS is the world’s fifth largest employer, an operation so vast that it occupies one in 20 British workers. 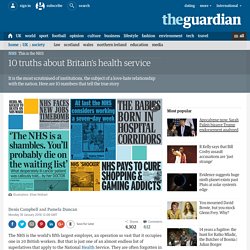 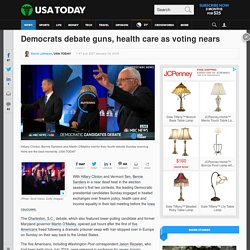 Here are the best moments. USA TODAY With Hillary Clinton and Vermont Sen. Bernie Sanders in a near dead heat in the election season’s first two contests, the leading Democratic presidential candidates Sunday engaged in heated exchanges over firearm policy, health care and income equality in their last meeting before the Iowa caucuses. The Charleston, S.C., debate, which also featured lower-polling candidate and former Maryland governor Martin O'Malley, opened just hours after the first of five Americans freed following a dramatic prisoner swap with Iran stopped over in Europe on Sunday on their way back to the United States. The five Americans, including Washington Post correspondent Jason Rezaian, who had been held since July 2014, were released in exchange for seven Iranian citizens who had been held on sanctions-related offenses. 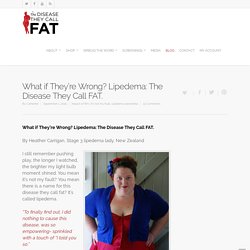 Lipedema: The Disease They Call FAT. By Heather Carrigan, Stage 3 lipedema lady, New Zealand. Chipotle to close all stores on Feb. 8 for all-staff meeting on food safety. Due to the E. coli outbreak that has been plaguing the company since October, Chipotle will shutter all its stores for a few hours on Feb. 8 for a national all-employee meeting about the plans to eliminate the issue, a rep confirms to E! 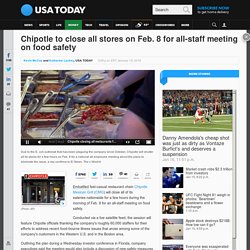 News. Botched French drug trial leaves 1 brain-dead, 5 others hospitalized. One man is brain-dead and five others are hospitalized after receiving an experimental drug in France, health officials announced Friday. 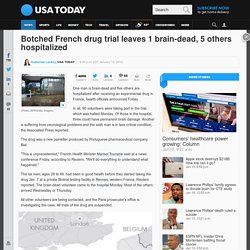 In all, 90 volunteers were taking part in the trial, which was halted Monday. Of those in the hospital, three could have permanent brain damage. Another is suffering from neurological problems and the sixth man is in less critical condition, the Associated Press reported. The drug was a new painkiller produced by Portuguese pharmaceutical company Bial. "This is unprecedented," French Health Minister Marisol Touraine said at a news conference Friday, according to Reuters. The Disease They Call FAT - Lipedema Treatment Diet. 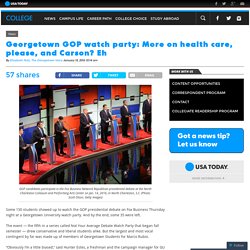 (Photo: Scott Olson, Getty Images) Some 150 students showed up to watch the GOP presidential debate on Fox Business Thursday night at a Georgetown University watch party. And by the end, some 35 were left. Consumers' healthcare power growing: Column. The Affordable Care Act has made health insurance more affordable for millions of Americans, addressed the difficult problem of pre-existing conditions and mandated minimum benefit plans, all laudable goals.

At the same time, I think it is fair to say that, in the six years since its passage, the law has moved through our health care landscape like a hurricane, cutting a wide swath of change (and no small amount of chaos) in every aspect of the most complex ecosystem in American commerce. In particular, these changes are adding fuel to a rising consumerism in health care, as more consumers are forced to directly purchase health insurance and pay out-of-pocket a larger share of their health care costs. The ACA’s latest open enrollment season began last November and wraps up this month, requiring all members of a plan under the act to reassess their coverage. The Disease They Call FAT - Lipedema Treatment Diet. Treatment for Lipedema - The Disease They Call FAT. Deadly Ebola outbreak ends in West Africa — for now. The deadliest ebola outbreak ever ended Thursday according to the World Health Organization.

The end of the outbreak was declared when no new cases appeared in Liberia after 42 days, the threshold of days to end an outbreak. USA TODAY More than two years after it began, an Ebola outbreak that claimed 11,315 lives — the deadliest in history — appears to be over, the World Health Organization said Thursday.

The WHO reported all three of the hardest-hit West African countries — Liberia, Guinea, and Sierra Leone — are free of Ebola, which also sickened nearly 29,000. As diseases proliferate, mosquitoes becoming Public Enemy No. 1. In the past year, Zika has spread from Africa and Asia through the Americas. In Brazil, the number of infants born with shrunken, malformed brains has gone up by a factor of 10 since Zika entered the country. USA TODAY As diseases go, Zika virus was always considered minor league.