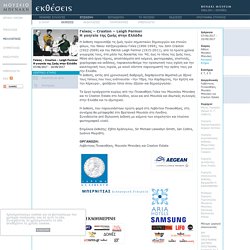 Επιμέλεια έκθεσης: Εβίτα Αράπογλου, Sir Michael Llewellyn-Smith, Ian Collins, Ιωάννα Μωραΐτη. Aegean Prehistoric Archaeology. The Late Bronze Age Eruption of the Santorini Volcano Early in the Late Bronze Age, the volcano at the center of the island of Santorini (or Thera) erupted on a scale which may have had no parallel among eruptions over the past four or five millennia by volcanoes located in or near densely populated areas of the globe. 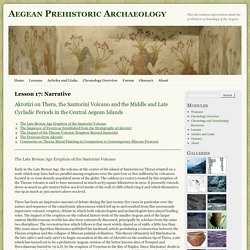 The caldera (or crater) created by this eruption of the Theran volcano is said to have measured as much as 83 square kilometers in area. It presently extends down as much as 480 meters below sea level inside of the wall of cliffs which ring it and which themselves rise up as much as 300 meters above sea level. There has been an impressive amount of debate during the last twenty-five years in particular over the nature and sequence of the cataclysmic phenomena which led up to and resulted from this enormously impressive volcanic eruption, debate in which both vulcanologists and archaeologists have played leading roles.

Top Top The Frescoes from Akrotiri 1. 2. 3. 4. 5. 6. This 3,500-Year-Old Greek Tomb Upended What We Thought We Knew About the Roots of Western Civilization. They had been digging for days, shaded from the Greek sun by a square of green tarpaulin slung between olive trees. 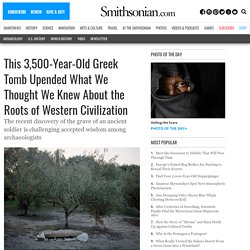 The archaeologists used picks to break the cream-colored clay, baked as hard as rock, until what began as a cluster of stones just visible in the dirt became four walls in a neat rectangle, sinking down into the earth. Little more than the occasional animal bone, however, came from the soil itself. On the morning of May 28, 2015, the sun gave way to an unseasonable drizzle. The pair digging that day, Flint Dibble and Alison Fields, waited for the rain to clear, then stepped down into their meter-deep hole and got to work. Dibble looked at Fields. The season had not started well. Dibble was clearing earth from around a large stone slab when his pick hit something hard and the monotony of the clay was broken by a vivid flash of green: bronze.

“It’s incredible luck,” says John Bennet, director of the British School at Athens. Blegen began excavations in April 1939. Listen To How Homer's Odyssey Sounded In Original Ancient Greek. While the Iliad and the Odyssey stand out as the ancient pillars of epic literature from the Western culture, there is complex historicity when it comes to their authorship. 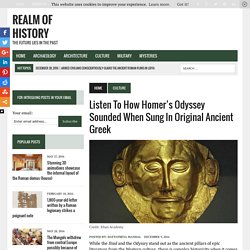 In essence, while it may seem controversial, Homer is a semi-legendary character, with oral traditions and romanticism possibly playing their part alongside real life personalities, thus resulting in a refined concoction of fable and history. History - Ancient History in depth: The Fall of the Minoan Civilisation. Interview with Ron Stroud Part 1.2. Interview with Ron Stroud: Part I. As this is the academic year 2009-2010, it is the 50th anniversary of the ASCSA's Class of 1959 Regular Year Students. 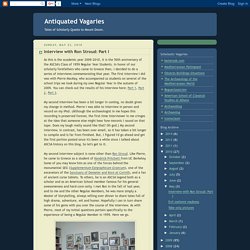 In honor of our scholarly forefathers who came to Greece then, I decided to do a series of interviews commemorating that year. The first interview I did was with Pierre MacKay, who accompanied us students on several of the school trips we took during my own Regular Year in the autumn of 2009. You can check out the results of his interview here: Part 1, Part 2, Part 3. My second interview has been a bit longer in coming, no doubt given my change in method. Pierre I was able to interview in person and record on my iPod. My second interview subject is none other than Ron Stroud. Interview with Pierre MacKay: Part 1. On April 3rd, I interviewed Pierre MacKay about his experience in the Regular Year program. 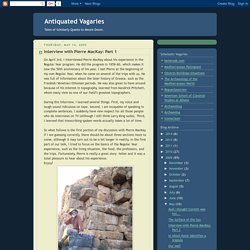 He did the program in 1959-60, which makes it now the 50th anniversary of his year. I met Pierre at the beginning of my own Regular Year, when he came on several of the trips with us. He was full of information about the later history of Greece, such as the Frankish/Venetian/Ottoman periods. He was also great to have around because of his interest in topography, learned from Kendrick Pritchett, whom many view as one of our field’s greatest topographers. During this interview, I learned several things. So what follows is the first portion of my discussion with Pierre MacKay.

Pierre MacKay (photo by Dan Leon). How did you hear about the Regular Year and how did you know you wanted to do this program? What was the application process like? How did people fund an entire year in Greece?