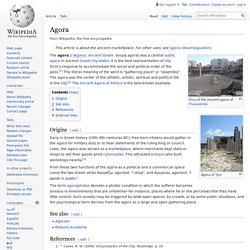 History of the Athenian Agora. Panoramic view of The Agora of Athens The Temple of Hephaestus is on the left, and the Stoa of Attalos on the right. 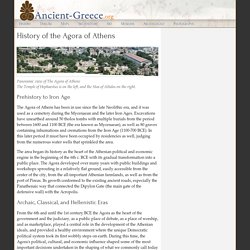 Prehistory to Iron Age The Agora of Athens has been in use since the late Neolithic era, and it was used as a cemetery during the Mycenaean and the later Iron Ages. Excavations have unearthed around 50 tholos tombs with multiple burials from the period between 1600 and 1100 BCE (the era known as Mycenaean), as well as 80 graves containing inhumations and cremations from the Iron Age (1100-700 BCE). In this later period it must have been occupied by residencies as well, judging from the numerous water wells that sprinkled the area. 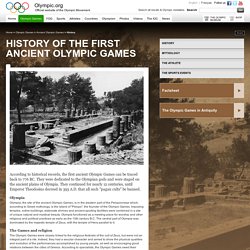 They were dedicated to the Olympian gods and were staged on the ancient plains of Olympia. They continued for nearly 12 centuries, until Emperor Theodosius decreed in 393 A.D. that all such "pagan cults" be banned. Olympia Olympia, the site of the ancient Olympic Games, is in the western part of the Peloponnese which, according to Greek mythology, is the island of "Pelops", the founder of the Olympic Games. Imposing temples, votive buildings, elaborate shrines and ancient sporting facilities were combined in a site of unique natural and mystical beauty. Red outline of the Macedonian Empire. Timeline of the History of Macedonia. Timeline of the History of Macedonia Macedonia is located in the center of the Southern Balkans, north of ancient Hellas (Greece), east of Illyria, and west of Thrace. 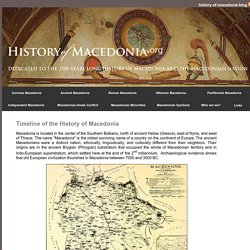 The name "Macedonia" is the oldest surviving name of a country on the continent of Europe. The ancient Macedonians were a distinct nation, ethnically, linguistically, and culturally different from their neighbors. Their origins are in the ancient Brygian (Phrygian) substratum that occupied the whole of Macedonian territory and in Indo-European superstratum, which settled here at the end of the 2nd millennium. Archaeological evidence shows that old European civilization flourished in Macedonia between 7000 and 3500 BC. [808-399 BC] Caranus establishes the ancient Macedonian kingdom and is the first known Macedonian king (808-778 BC) . [359-336 BC] Philip II (359-336 BC) raises Macedonia into the greatest European Power after subduing all of Macedonia's neighbors - Illyrians, Thracians, and Greeks.

Map of the Mediterranean Sea. Crete. The island of Crete was the center of Minoan civilization in Bronze-Age Greece that flourished from approximately 2200 to 1450 BCE. 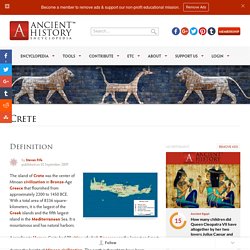 With a total area of 8336 square-kilometers, it is the largest of the Greek islands and the fifth largest island in the Mediterranean Sea. It is mountainous and has natural harbors. According to Homer, Crete had 90 cities, of which Knossos was the largest and most important. It is believed that the island was divided into at least 8 political units during the height of Minoan civilization. History of Minoan Crete. Geography and Economy of Crete The island of Crete is located in the center of the eastern Mediterranean at the crossroads of Africa, Asia, and Europe. 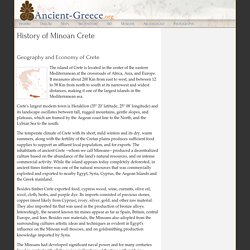 It measures about 200 Km from east to west, and between 12 to 58 Km from north to south at its narrowest and widest distances, making it one of the largest islands in the Mediterranean sea. Crete's largest modern town is Heraklion (35° 20' latitude, 25° 08' longitude) and its landscape oscillates between tall, rugged mountains, gentle slopes, and plateaus, which are framed by the Aegean coast line to the North, and the Lybian Sea to the south.

Mount Olympus. Peloponnese. The Peloponnese is a large peninsula linked to the northern territory of Greece by the Isthmus of Corinth. 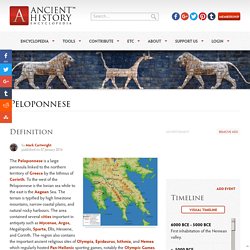 To the west of the Peloponnese is the Ionian sea while to the east is the Aegean Sea. The terrain is typified by high limestone mountains, narrow coastal plains, and natural rocky harbours. The area contained several cities important in antiquity such as Mycenae, Argos, Megalopolis, Sparta, Ellis, Messene, and Corinth. The region also contains the important ancient religious sites of Olympia, Epidaurus, Isthmia, and Nemea which regularly hosted Pan-Hellenic sporting games, notably the Olympic Games. The Bronze Age Inhabited since prehistoric times, the name Peloponnese (in Greek Peloponessos, a term first used in the Archaic period) means 'island of Pelops' and derives from the mythical king Pelops who was thought to have unified the region.

The Peloponnese city-states effectively combined for major conflicts, notably in the Peloponnesian War of 431-404 BCE. Map of Black Sea - World Seas, Black Sea Map Location. Print this map other bodies of water The Black Sea is an inland sea located between far-southeastern Europe and the far-western edges of the continent of Asia and the country of Turkey. 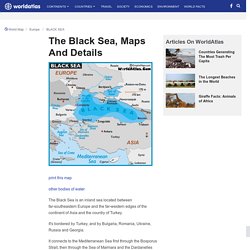 Ancient Greece-Persia. Acropolis. An `acropolis’ is any citadel or complex built on a high hill. 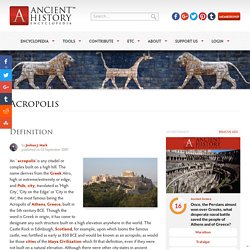 The name derives from the Greek Akro, high or extreme/extremity or edge, and Polis, city, translated as 'High City’, 'City on the Edge’ or 'City in the Air’, the most famous being the Acropolis of Athens, Greece, built in the 5th century BCE. Though the word is Greek in origin, it has come to designate any such structure built on a high elevation anywhere in the world. The Castle Rock in Edinburgh, Scotland, for example, upon which looms the famous castle, was fortified as early as 850 BCE and would be known as an acropolis, as would be those cities of the Maya Civilization which fit that definition, even if they were not built on a natural elevation.

Athens Acropolis. Mycenae. Mycenae The Lions GateThe palace of Mycenae is surrounded by a fortification wall. 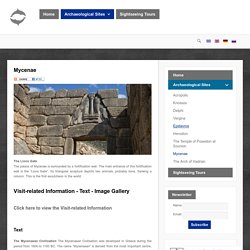 Temple of Poseidon. The Temple of Poseidon Archaeological evidence indicates that Sounion was a sacred area as far back as the Bronze Age, but the temple visible in our day was built in the middle of the 5th century BCE (between 444 and 440 BCE). Facts about Greece Country. ShowIntroduction :: GREECE Panel - Collapsed Greece achieved independence from the Ottoman Empire in 1830. During the second half of the 19th century and the first half of the 20th century, it gradually added neighboring islands and territories, most with Greek-speaking populations.

In World War II, Greece was first invaded by Italy (1940) and subsequently occupied by Germany (1941-44); fighting endured in a protracted civil war between supporters of the king and other anti-communist and communist rebels. Following the latter's defeat in 1949, Greece joined NATO in 1952. In 1967, a group of military officers seized power, establishing a military dictatorship that suspended many political liberties and forced the king to flee the country. City of Alexandria. Ancient site, Greece. Parthenon. The magnificent temple on the Acropolis of Athens, known as the Parthenon, was built between 447 and 432 BCE in the Age of Pericles, and it was dedicated to the city’s patron deity Athena. The temple was constructed to house the new cult statue of the goddess by Pheidias and to proclaim to the world the success of Athens as leader of the coalition of Greek forces which had defeated the invading Persian armies of Darius and Xerxes.

Plan: Doric peripteral temple with cella opening east. History: Built by the Athenians to replace an older uncompleted temple, a portion of which can be seen south of the temple platform, damaged by the Persians in 480 B.C. Other Bibliography: Sardis. Sardis was an important ancient city and capital of the kingdom of Lydia, located in western Anatolia, present-day Sartmustafa, Manisa province in western Turkey. Its strategic location made it a central point connecting the interior of Anatolia to the Aegean coast. During its history, control of Sardis changed many times, but it always kept a high status among cities.

The Royal Road (Circa 450 BCE – 420 BCE) : HistoryofInformation.com. King Darius I. Peninsula, Greece. Knossos. Knossos was undeniably the capital of Minoan Crete. It is grander, more complex, and more flamboyant than any of the other palaces known to us, and it is located about twenty minutes south of the modern port town of Iraklio. Knossos was inhabited for several thousand years, beginning with a neolithic settlement sometime in the seventh millennium BC, and was abandoned after its destruction in 1375 BC which marked the end of Minoan civilization. The first palace on the low hill beside the Krairatos river was built around 1900 BC on the ruins of previous settlements. It was destroyed for the first time along with the other Protopalatial palaces around Crete at 1700 BC, probably by a large earthquake or foreign invaders. Knossos: Palace of the Minoans.

A Peninsula, Island, or an Isthmus Video.