Scientists in Italy rediscover snake that was used by ancient Greeks as a weapon of war. The History of Homosexuality: Ancient Greece. Ancient Greece stands as something of a shorthand whenever we think today of a “history” or even “origin” of homosexual behaviour.

On the surface, the correlation is a fair one. There’s enough in the written record — to say nothing of statues, art, and pottery — to convince us that male same-sex sexuality was known and frequently celebrated. To call such conduct “homosexual” as we recognise that meaning today is, however, not only anachronistic, but simply wrong. For starters, “Ancient Greece” wasn’t one nation the way modern Greece is, but was constructed of numerous self-governing states, all of which had different cultures and traditions, and were frequently at odds with each other, if not at outright war.

A number of states are still famous today — the most powerful were Athens, Sparta, Corinth, Megara, and Argos — and each state put different emphasis on how their subjects were to live. The rules governing such relationships were strict. 30% rebate at ARe ends today! Like this: Minoan Culture. Religion Religion played an important role in Minoan Crete and many activities, and artistic products revolved around religious cult. 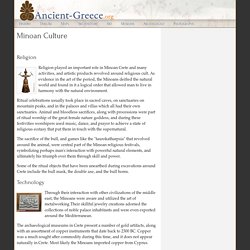 As evidence in the art of the period, the Minoans deified the natural world and found in it a logical order that allowed man to live in harmony with the natural environment. Ritual celebrations usually took place in sacred caves, on sanctuaries on mountain peaks, and in the palaces and villas which all had their own sanctuaries. Animal and bloodless sacrifices, along with processions were part of ritual worship of the great female nature goddess, and during these festivities worshipers used music, dance, and prayer to achieve a state of religious ecstasy that put them in touch with the supernatural. Minoans: Religion. The Mycenaean Civilization. Enormous monolith, carved 9350 years ago, found under Mediterranean Sea. Source: Journal of Archaeological Science Source: Supplied A joint exploration of divers from the Ministry of Defence and the Russian Geographical Society uncovered an ancient ship at the bottom of the Black Sea, Tuesday. 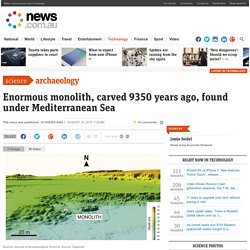 The Byzantine ship was located by divers from Sevastopol and Rostov at a depth of 82 metres (269 ft) with a cargo of amphorae (large two-handled pots with narrow heads). According to scientists, the discovery is either a single Byzantine vessel of up to 125 metres (410 ft) in length or two ships lying next to each other. It is believed to be just the third such discovery of its kind in the history of Black Sea research. Featured Video More videos available at the News video hub A ban on Dutch tulips entered into force in Russia, Monday, following a July 21 declaration by the Federal Service for Veterinary and Phytosanitary Surveillance (Rosselkhoznadzor) that tulips grown in Holland represent a sanitary threat. St. It’s now under 40m of water. The Ancient Minoans of Crete. A detail of the dolphin fresco, the Minoan palace of Knossos, Crete, (c. 1700-1450 BCE). 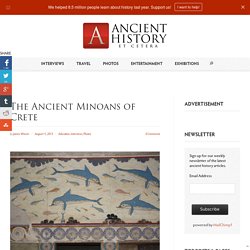 Photograph taken by Mark Cartwright for Ancient History Encyclopedia. Uploaded by Mark Cartwright, published on 26 April 2012 under the following license: Creative Commons: Attribution-NonCommercial-ShareAlike. In the footsteps of Xerxes. Today we have another contribution from Time Travels Magazine in which Ben Churcher writes about the remains that can be found of the Persian wars in Greece. 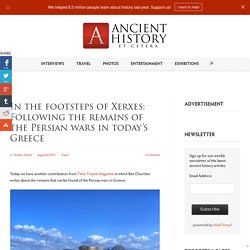 View of the Acropolis, Athens. The road from the Plain of Marathon to downtown Athens is, as we all know, around 40 km due to the length of the modern marathon that supposedly commemorates a run undertaken in 490 BCE to announce to the Athenians that they had defeated the Persians. Herodotus - Ancient History. Instead of settling in one place, Herodotus spent his life traveling from one Persian territory to another. 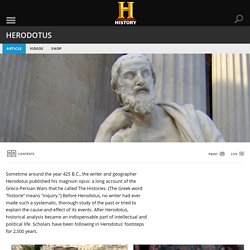 He crossed the Mediterranean to Egypt and traveled through Palestine to Syria and Babylon. He headed to Macedonia and visited all the islands of the Greek Archipelago: Rhodes, Cyprus, Delos, Paros, Thasos, Samothrace, Crete, Samos, Cythera and Aegina. He sailed through the Hellespont to the Black Sea and kept going until he hit the Danube River. While he traveled, Herodotus collected what he called “autopsies,” or “personal inquiries”: He listened to myths and legends, recorded oral histories and made notes of the places and things that he saw. When Herodotus was not traveling, he returned to Athens; there, he became something of a celebrity. Unbelievable inventions by ancient Greeks that remained unexplained until the...

Fineartprintsondemand A new museum dedicated to the advanced technological inventions of ancient Greek scientist Archimedes, has just opened up in Ancient Olympia, Greece. 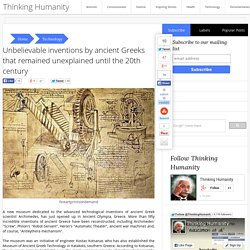 Greece 3. Greece 4. Greece 5. The Rise and Fall of Ancient Alexandria. It’s time that we took a quick history lesson to get some solid understanding of our past. 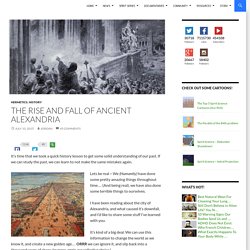 If we can study the past, we can learn to not make the same mistakes again. Lets be real ~ We (Humanity) have done some pretty amazing things throughout time… (And being real), we have also done some terrible things to ourselves. I have been reading about the city of Alexandria, and what caused it’s downfall, and I’d like to share some stuff I’ve learned with you. It’s kind of a big deal. We can use this information to change the world as we know it, and create a new golden age… ORRR we can ignore it, and slip back into a thousand years of chaos (or more, again, our collective choice.) Long ago, there was a city where spiritual people of all kinds, every race, religion, sect, culture, and paradigm were safe to come together, discuss their philosophies, and explore ideas about who they truly were. 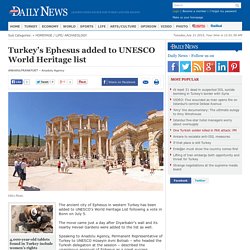 The move came just a day after Diyarbakir’s wall and its nearby Hevsel Gardens were added to the list as well. Speaking to Anadolu Agency, Permanent Representative of Turkey to UNESCO Hüseyin Avni Botsalı – who headed the Turkish delegation at the session – described the unanimous approval of Ephesus as a great success. “In fact, we have a great responsibility on our shoulders in terms of cooperation of the international community in this field. We will make significant efforts for the protection of civilizational values and cultural properties,” he added.

Turkish Culture and Tourism Minister Ömer Çelik celebrated the development in a series of Twitter posts. [Luke Slattery] The legacy of Alexander the Great. Parthenon may have served as treasury of Athens. Posted by TANNArchaeoHeritage, Archaeology, Breakingnews, Europe, Greece, Southern Europe10:00 PM The Parthenon’s attic may have been the storage place for ancient Athens’ vast cash reserves. 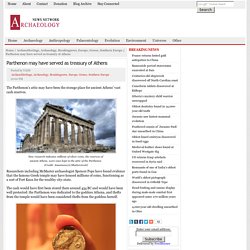 Researchers including McMaster archaeologist Spencer Pope have found evidence that the famous Greek temple may have housed millions of coins, functioning as a sort of Fort Knox for the wealthy city-state. The cash would have first been stored there around 434 BC and would have been well protected: the Parthenon was dedicated to the goddess Athena, and thefts from the temple would have been considered thefts from the goddess herself. Evidence suggests that such reserves could have, at times, reached a weight of 260 metric tons. The attic area is now destroyed, but the researchers estimate that its floor would have spanned an area more than three times that of a tennis court.

Mosaic of Alexander the Great is discovered inside synagogue in Huqoq, Israel. Artwork was uncovered in a fifth-century synagogue in Huqoq, IsraelMay depict Alexander the Great, based on the presence of elephantsScene is the first non-biblical story to be found in an ancient synagogueDepictions of Biblical hero Samson are also part of the decorative floor By Sarah Griffiths for MailOnline Published: 08:43 GMT, 15 July 2015 | Updated: 12:21 GMT, 15 July 2015 Stunning mosaics that may depict Alexander the Great meeting a Jewish priest have been unearthed in Israel.

Questioning the Mycenaean Death Mask of Agamemnon. The German archaeologist, Heinrich Schliemann is perhaps one of the luckiest archaeologists in history. His discovery of the Mask of Agamemnon was not his first, but second remarkable discovery. Having already discovered the real location of the legendary Troy, Schliemann’s next project was to discover the final resting place of Agamemnon, the king of Mycenae who led the Greek forces during the Trojan War.

Though there is debate if Schliemann ever reached his second goal, he certainly made another impressive find in the process - the 'Mask of Agamemnon.' Schliemann is probably best known for his identification of Troy at Hissarlik, and the unearthing of the ‘Treasure of Priam’. Less well-known, may be his subsequent excavation in Mycenae, Greece. The War That Killed Achilles: The True Story of Homer’s Iliad and the Trojan War. Seven Wonders of the Ancient World: The Most Magnificent Monuments of Antiquity. Weapon Wednesday: The Nugent Marathon Corinthian Helmet. 98.03.09: The Warrior Role in Greek Society. As a teacher of World Cultures, and particularly Ancient Civilizations, I think it is important to expose students to various aspects of each culture and make an attempt to recreate the past conditions in those societies. This provides students with the means to arrive at a subjective awareness of themselves as members of contemporary society, while gathering the necessary objective knowledge of past events to meet this end.

Pinterest. Did the Ancient Athenians Store Wealth in the Parthenon’s Attic? The ancient fairy tale of Cupid and Psyche, where love endures against all odds. The mythological tale of Cupid and Psyche is one of the few Greek and Roman myths that has not fully become assimilated into modern consciousness. The Strategic Use of Hostages in the Ancient World. The practice of taking hostages is not a new phenomenon but has existed since ancient times, and was a strategic tool employed by various civilizations around the world, particularly during times of war.

Spp230_hellenes_romans_in_china. What the Ancient Greeks can teach us about our view of the world. When the Ancient Greek philosopher Epictetus died in AD 135, he probably had little idea that his thinking, and that of other philosophers from around his time, would inspire two psychologists to formulate the idea of cognitive behavioural therapy over 1,800 years later.

Thanks to an excellent book by the British philosopher Jules Evans (Philosophy for Life and Other Dangerous Situations) I was fascinated to learn that Albert Ellis – one of the two CBT-inventing psychologists (Aaron Beck was the other) – acknowledged that the ancient Greeks knew a thing or two about the way our minds work. Epictetus, for example, said: ‘What disturbs men’s minds is not events but their judgements on events.’ Sparta, Dorian Ancient Greece and Lacedaemon. Index Myths about Sparta According to myth it all started when Taugete bore Lacedaimon who wed Sparta. History of Sparta. In this lesson, you'll examine forces that shaped a Spartan society of elite warriors. We'll also explore the stratified caste system created by Lycurgus. Sparta : Journal of Ancient Spartan and Greek History. Sparta Reconsidered - Overview - Historical culture of Sparta.

Sparta was the first democracy in recorded history, predating Athenian democracy by at least 50 and possibly 100 years. Furthermore, Sparta was the only Greek city-state to introduce land reform aimed at equalizing wealth among its citizens. Sparta. Some Famous Spartans. The EPHORS OF SPARTA. Another defect in the Lacedaemonian constitution is seen in connection with the office of ephor. The ephorate independently controls much important business. Its five members are chosen from among all the people, with the result that very often men who are not at all well-off find themselves holding this office, and their lack of means makes them open to bribery. . . . SYSSITIA - PHITIDIA. XENOPHON on the SPARTANS. The Helots: Slave Warriors of Ancient Sparta. Were the Spartans truly the greatest warriors of all time?

Ancient Aegean. HISTORY OF AEGEAN CIVILIZATION. Greece, A History of Ancient Greece, AEGEAN CIVILIZATION. Wonder of the Ancient World: The Grand and Powerful Statue of Zeus. Let’s talk about sex: men and women in Greek art. Which Ancient Greek Philosopher Are You? Telegraph: Greece has no legal claim to the Elgin Marbles. The Mausoleum of Halicarnassus: A Wonder of the Ancient World. Ancient Greek Democracy - Culture. The Minoans were Caucasian: DNA debunks longstanding theory that Europe's first advanced culture was from Africa.