Executing the Ministers: the young Hemingway and a Greek tragedy. Hemingway forged his innovative style when he was young. 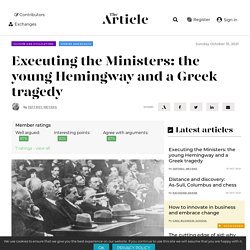 Greek Orthodox Funeral Traditions and Modern Customs. Strong faith and the support of a spiritual community are what you can expect when attending a Greek funeral service. 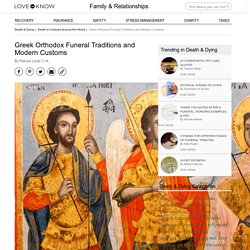 The Greek Orthodox Church believes death is a sacred experience that the funeral offers time for spiritual reflection, expressing emotions, and giving praise while grieving. Body and Soul Are One The Greek Orthodox church teaches that soul and body are created together at conception. Though separated at death, at the second coming of Christ, the body will be resurrected, spiritualized, and united with the soul to live together eternally in God's kingdom. Mitsotakis Luring Diaspora Greeks To Return With Generous Tax Breaks - Greek City Times. Prime Minister Kyriakos Mitsotakis announced tax incentives for Greeks abroad but also for citizens of other countries who will choose to work based in Greece in the coming years. 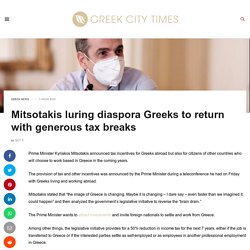 The provision of tax and other incentives was announced by the Prime Minister during a teleconference he had on Friday with Greeks living and working abroad. Mitsotakis stated that “the image of Greece is changing.

Golden Dawn. Chios. Syriza. How Greece is rethinking its once bustling tourism industry. Yet, by mid-July, even after international arrivals were once again allowed into all Greek airports and sea ports—minus several high-risk countries like the United States and Brazil—things did not appear to be reverting to normal. 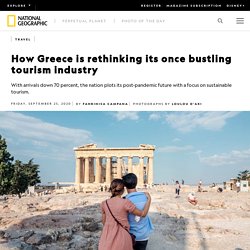 Although many foreign visitors were returning to Santorini, fear of the virus as well as economic hardship kept most people away. From compliance to concern Greece has been lauded for its swift and effective response to the novel coronavirus threat. Immediately following the confirmation of the first three cases of COVID-19 on February 27, and before a single death was recorded, Greek authorities started putting in place restrictions on large gatherings, including in educational and religious institutions. An angel kidnapped by Gypsies? In the absence of all the facts, age-old libels are being replayed. Could not load plugins: File not found Link to video: Greek Roma couple say Maria was adopted She is, we have been told repeatedly, the girl Greece is calling "the blonde angel". 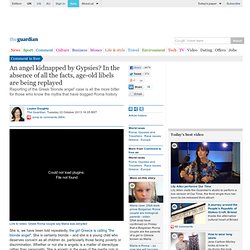 She is certainly blonde – and she is a young child who deserves concern as all children do, particularly those facing poverty or discrimination. Whether or not she is angelic is a matter of stereotype rather than personality. Greece and suicide: A hard subject for a sermon. Eurozone crisis live: Fresh speculation over Greece's future. Good morning, and welcome to our rolling coverage of the eurozone debt crisis, and other key events in the world economy. 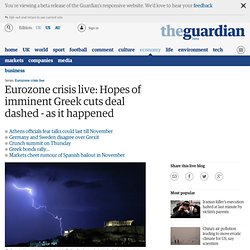 Tension is building ahead of this week's European Union summit. Government leaders from across the EU will gather in Brussels on Thursday for two days of negotiations. Greece shocked at EU peace prize amid economic 'war' There are prizes and prizes. 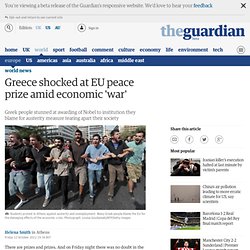 And on Friday night there was no doubt in the minds of most Greeks that the biggest of them all, the Nobel peace prize, had gone to the wrong recipient. In the country on the frontline of the worst crisis to hit the continent since the second world war, news that the EU had been given the award for its efforts to promote peace and democracy was greeted with bewilderment and disbelief. Three days after tens of thousands of people demonstrated in Athens over a visit by Angela Merkel – some dressed in Nazi regalia — many wondered whether the decision was a joke.

Or even a Norwegian ruse to get the increasingly divided, debt-choked nation to bow to Germany's demands for austerity. Chinese Company Sets New Rhythm in Port of Piraeus. By Nikolia Apostolou Privatizing the Port of Piraeus: The International Herald Tribune’s chief business reporter, Liz Alderman, profiles a Greek port where Chinese management is struggling to recast labor relations. 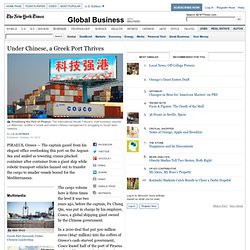 The cargo volume here is three times the level it was two years ago, before the captain, Fu Cheng Qiu, was put in charge by his employer, Cosco, a global shipping giant owned by the Chinese government. In a 2010 deal that put 500 million euros ($647 million) into the coffers of Greece’s cash-starved government, Cosco leased half of the port of Piraeus and quickly converted a business that had languished as a Greek state-run enterprise into a hotbed of productivity. One small step for womankind in an all-male Greek state. View of the holy Mount Athos monastery and coastline, Greece. Photograph: Alamy I'm in Thessaloniki, Greece's second city, which nestles on the coast next to Halkidiki's three peninsulas, snaking into the Aegean sea like tentacles.

The peninsulas are an understandable tourist spot in Northern Greece, with their expansive beaches, street cafes and pine forests. Unfortunately, I can only visit two of them, Kassandra and Sithonia, because the third, Mount Athos, has banned all women for the past thousand years. From Greece: Declaration for the Defense of Society and Democracy. [The following statement was issued by a group of Greek academics regarding the ongoing crises in Greece.] 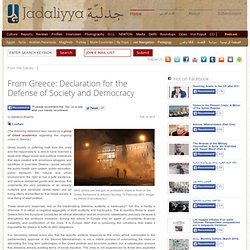 Greek society is suffering both from the crisis and the responses to it, which have reached a dead-end. Major social and political institutions that were created with enormous struggles and sacrifices in post-War Greece—social security, the public health care system, public education, public transport, the natural and urban environment, the right to live a safe existence, and various elemental goods and services that underwrite the very existence of an already curtailed and devalued Greek state—are all being utterly dismantled so that Greek society is now dying of asphyxiation. Struggling Greeks losing belief in the state.

17 February 2012Last updated at 08:49 ET Watch Paul's Newsnight report from Greece in full The breeze block homes that cling to the sides of the cliffs above Piraeus harbour are painted typical Greek colours: cream and pink. 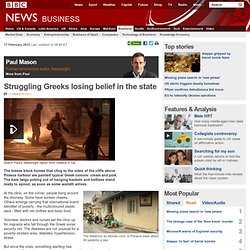 The bare twigs poking out of hanging baskets and trellises stand ready to sprout, as soon as some warmth arrives. Greece’s Youth in Crisis. With austerity measures in place and unemployment at astronomic highs, Greece’s disaffected youth is feeling rather affected. Will theirs be a lost generation? Sotiris Pastras gave up a career as a champion swimmer to pursue something more practical: a job in the media. But since the 25-year-old Greek student enrolled in a media studies course in Athens last year, about 350,000 people have lost their jobs, taking the country’s unemployment rate to a frightening 18.4 percent. Greece now has fewer people in work than those who are either unemployed or retired.

For young Greeks especially, the figures are devastating: 43.5 percent of those under 25 are without jobs. Amid Economic Strife, Greeks Look to Farming Past. The Way Greeks Live Now. The Only Leader Who Understood Greece's Real Problem is Resigning - Max Fisher - International. Greece: The history behind the collapse - Georges Prévélakis. Historically positioning themselves between an unruly, oriental population and the western powers, since 1981 Greek elites have siphoned off EU funds into a bloated public sector favouring corruption, patronage and social climbing. The threat posed to Europe by the breakdown is less contagion to the centre than a wave of anti-western feeling that could exacerbate geopolitical instabilities in the region.

It all started two years ago, in the autumn of 2009. James Meek · Diary: In Athens · LRB 1 December 2011. Athens, 9 November. Voula is a smart district of Athens for rich citizens who want to live by the sea. Sleek white apartment blocks with big balconies face the Aegean, which undulates like a lake of mercury under a cool grey sky. Set some way back from the coast is the local public hospital, Asklepieia Voulas, made up of low-rise buildings of plastered brick spread out among grass and trees and partly unmetalled tracks.

You can wander in; there’s no security. Is Greece a Failed State? - By Nick Malkoutzis. Two years ago, Greece's Prime Minister George Papandreou compared his country's travails to "a new Odyssey. " Since then, about half a million Greeks have lost their jobs, tens of thousands of businesses have closed, the economy has shrunk by more than a tenth, Athens has witnessed several riots, and Papandreou's government has collapsed. John Markakis · Taking to the Streets: Greek Democracy · LRB 22 March 2012. When in Greece by Alexios Arvanitis. Exit from comment view mode. Click to hide this space ATHENS – Italian President Mario Monti, US President Barack Obama, and other leaders have declared, “We are not Greece,” in order to explain why their countries are not on the brink of financial collapse.

Something's Rotten in Athens - By Timothy Fadek. Just when you think Greece's financial implosion can't get any worse, a new wrinkle emerges to further frighten observers worried about the country's prospects. On Tuesday, the New York Times warned that dwindling tax proceeds could quickly leave the country out of cash, and headlines continue to blare that Greece's "agony" won't end with new elections on June 17. Greece’s Choice: Bargaining versus pleading (a piece to appear in the Huffington Post) The Earthquake in Greece - By Louis Klarevas. A Land Without a Rudder - By Joanna Kakissis. ATHENS – The only thing that's clear after the contentious and chaotic Greek parliamentary elections, which appear to be headed for a revote in June, is that Greeks are willing to go to extremes to find an alternative to the country's current malaise. Most Greek media have long vilified the Coalition of the Radical Left, known as Syriza, as crazed ideologues who incite riots.

But late Sunday evening, all eyes were on Syriza's telegenic leader, a 37-year-old engineer named Alexis Tsipras. How a Radical Greek Rescue Plan Fell Short. What the Greek election tells us about Europe. Europe’s far-right parties now have mainstream political influence. LOUISA GOULIAMAKI/AFP/GettyImages. Congratulations are due to the new president of France: Francois Hollande finished off Nicolas Sarkozy on Sunday with a few percentage points to spare.

Greece: a police state made by the EU. Slavoj Žižek · Save us from the saviours · LRB 28 May 2012. How Greece Squandered Its Freedom. Greece, the Euro, and Behavioral Economics. Greekonomics. Interview with Greek Writer Nikos Dimou on Crisis. "Greece’s Catharsis?" by Yannos Papantoniou. Greek election result: an assessment. Greek populist parties and the disoriented mainstream. Greece: A Vote for the Euro!—or Maybe Not … The Alabama syndrome.