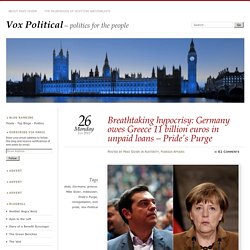 But will he be able to defeat Germany’s powers of financial coercion? UPDATE July 6, 2015: Greece has decisively rejected austerity, after a referendum in which voters refused the terms of an international bailout. “In 1943, Germany forced the Bank of Greece to lend it two loans worth 11 billion euros in today’s money. And Germany has still not paid back the debt,” writes Tom Pride. “Which – considering the Germans have been bleating on and on and bloody on about how the Greeks should honour their present debts – is a case of breathtaking hypocrisy writ large, I’d say.” He’s got a very good point – look at this report (from the Torygraph) of German sabre-rattling against the new Greek government, which is determined to reverse austerity measures imposed on the country and to renegotiate (read ‘cancel’) its debts: So the will of a country’s people counts for “nothing” then?

Greek Commission Concludes Germany Owes Billions in War Reparations. The headline on Sunday's issue of the Greek newspaper To Vima made it clear what is at stake: "What Germany Owes Us," it read. 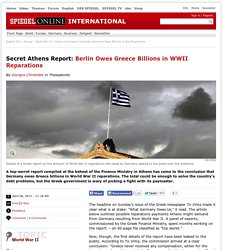 The article below outlined possible reparations payments Athens might demand from Germany resulting from World War II. A panel of experts, commissioned by the Greek Finance Ministry, spent months working on the report -- an 80-page file classified as "top secret. " Now, though, the first details of the report have been leaked to the public. According to To Vima, the commission arrived at a clear conclusion: "Greece never received any compensation, either for the loans it was forced to provide to Germany or for the damages it suffered during the war. " The research is based on 761 volumes of archival material, including documents, agreements, court decisions and legal texts.

The newspaper offered no concrete figure regarding the possible extent of reparation demands outlined in the report. Bad Time to 'Pick a Fight' The Greek public, however, has a different view. Germany-hypocrisy-eurozone-debt-crisis.pdf. Germany end World War One reparations after 92 years with £59m final payment. By Allan Hall for MailOnline Updated: 00:19 GMT, 29 September 2010 German Chancellor Adolf Hitler reneged on paying reparations Germany will finally clear its First World War debt by repaying nearly £60million this weekend. 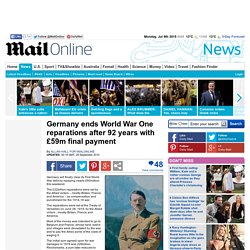 The £22billion reparations were set by the Allied victors – mostly Britain, France and America – as compensation and punishment for the 1914-18 war. The reparations were set at the Treaty of Versailles on June 28, 1919, by the Allied victors - mostly Britain, France and America. Most of the money was intended to go to Belgium and France, whose land, towns and villages were devastated by the war, and to pay the Allies some of the costs of waging it. The initial sum agreed upon for war damages in 1919 was 226billion Reichsmarks, a sum later reduced to 132billion. The German Federal Budget for 2010 shows the remaining portion of the debt that will be cleared on Sunday, October 3. ● World War One lasted four years, three months and 14 days. The Phobia Against Inflation And The Wrong Lessons Of The Weimar Republic. January 14, 2015 by Martin Odoni One of the things about Godwin’s Law is that it is only supposed to apply to discussions that take place over the Internet. 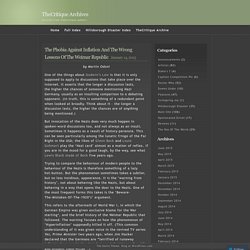