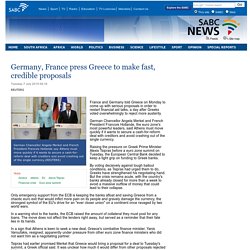 (REUTERS) France and Germany told Greece on Monday to come up with serious proposals in order to restart financial aid talks, a day after Greeks voted overwhelmingly to reject more austerity. German Chancellor Angela Merkel and French President Francois Hollande, the euro zone's most powerful leaders, said Athens must move quickly if it wants to secure a cash-for-reform deal with creditors and avoid crashing out of the single currency. 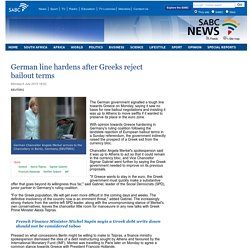 (REUTERS) The German government signalled a tough line towards Greece on Monday, saying it saw no basis for new bailout negotiations and insisting it was up to Athens to move swiftly if it wanted to preserve its place in the euro zone. With opinion towards Greece hardening in Germany's ruling coalition following the landslide rejection of European bailout terms in a Sunday referendum, the government indirectly raised the prospect of a Greek exit from the currency bloc. Chancellor Angela Merkel's spokesperson said it was up to Athens to act so that it could remain in the currency bloc, and Vice Chancellor Sigmar Gabriel went further by saying the Greek government needed to improve on its previous proposals. "For the Greek population, life will get even more difficult in the coming days and weeks. 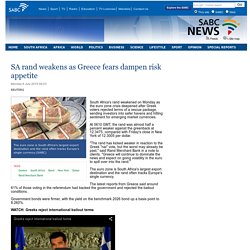 (SABC) South Africa's rand weakened on Monday as the euro zone crisis deepened after Greek voters rejected terms of a rescue package, sending investors into safer havens and hitting sentiment for emerging market currencies. Greek banks to stay closed at least until Friday:Monday 6 July 2015. The ECB froze a vital financial lifeline following the breakdown of bailout talks between Athens and its foreign creditors. 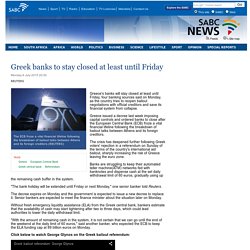 (REUTERS) Greece's banks will stay closed at least until Friday, four banking sources said on Monday, as the country tries to reopen bailout negotiations with official creditors and save its financial system from collapse. Greece votes No: experts respond :Monday 6 July 2015. By voting No, Greece has tied the hands of European Central Bank president Mario Draghi. 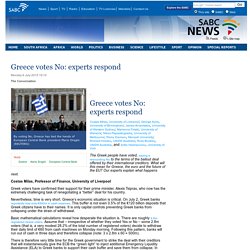 (REUTERS) Costas Milas, University of Liverpool; George Kyris, University of Birmingham; James Arvanitakis, University of Western Sydney; Marianna Fotaki, University of Warwick; Nikos Papastergiadis, University of Melbourne; Remy Davison, Monash University; Richard Holden, UNSW Australia; Ross Buckley, UNSW Australia, and Sofia Vasilopoulou, University of York The Greek people have voted, saying a resounding No to the terms of the bailout deal offered by their international creditors. What will this mean for Greece, the euro and the future of the EU? Our experts explain what happens next. China confident of Greek crisis outcome:Monday 6 July 2015. China is confident that Greece's economy will turn around with the hard work of all parties, a deputy foreign minister said on Monday, but would not say if the Greek Prime Minister could attend an emerging powers summit later in the week in Russia. 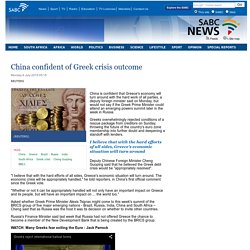 Chris Hart says that during the change of parliament from 1994, GDP levels were similar to now. 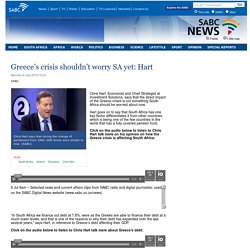 (SABC) Chris Hart, Economist ‎and Chief Strategist at Investment Solutions, says that the direct impact of the Greece crises is not something South Africa should be worried about now. Greece votes in referendum with future in euro in doubt:Sunday 5 July 2015. Investors and European policymakers say a rejection would set Greece on a path out of the euro(REUTERS) Greece voted on Sunday on whether to accept more austerity in exchange for international aid, in a high-stakes referendum likely to determine whether it leaves the euro-currency area after seven years of economic pain. 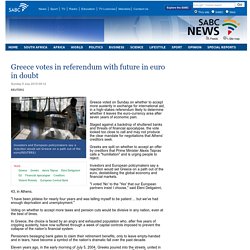 Staged against a backdrop of shuttered banks and threats of financial apocalypse, the vote looked too close to call and may not produce the clear mandate for negotiations that Athens’ creditors seek. Greeks are split on whether to accept an offer by creditors that Prime Minister Alexis Tsipras calls a "humiliation" and is urging people to reject. Investors and European policymakers say a rejection would set Greece on a path out of the euro, destabilising the global economy and financial markets. Greeks head to the polls on Sunday:Sunday 5 July 2015. Greek Prime Minister Alexis Tsipras. 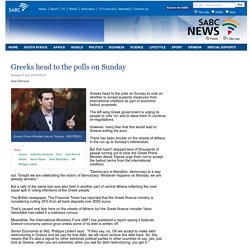 (REUTERS) Greeks head to the polls on Sunday to vote on whether to accept austerity measures from international creditors as part of economic bailout proposals. The left wing Greek government is urging its people to vote 'no' and to allow them to continue re-negotiations. However, many fear that this would lead to Greece exiting the euro. What looms for Greece after referendum:Sunday 5 July 2015. A man prepares to cast his ballot during a referendum in Athens, Greece,(REUTERS) Greek Prime Minister Alexis Tsipras's plan to hold a referendum on Sunday on creditors' demands for austerity has prompted a breakdown in talks with lenders, forced Greece to shut banks and left its future in the euro in doubt. 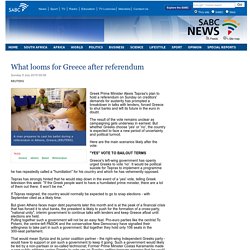 The result of the vote remains unclear as campaigning gets underway in earnest. But whether Greeks choose 'yes' or 'no', the country is expected to face a new period of uncertainty and political turmoil. Here are the main scenarios likely after the vote: "YES" VOTE TO BAILOUT TERMS Greece's left-wing government has openly urged Greeks to vote 'no'. Austria finmin says Europe can easily cope economically with Grexit:Saturday 4 July 2015.

Europe would suffer little economically should Greece leave the euro zone but the consequences for Greece would be considerably worse, Austria's Finance Minister Hans Joerg Schelling said on Saturday. "For Europe, this would be easy to manage economically. For Greece, it would indeed be considerably more dramatic," Schelling was quoted as saying in an interview with online newspaper Die Presse.

Schelling said Greece would need humanitarian aid in case of "Grexit" but described fears of widespread poverty sweeping Greece as overstated. "There's a propaganda war going on here. Greece might lose euro temporarily:Saturday 4 July 2015. Greek Prime Minister Alexis Tsipras. (REUTERS) Greece's finance minister accused creditors of trying to "terrorise" Greeks into accepting austerity, warning Europe stood to lose as much as Athens if the country is forced out of the euro after a referendum on Sunday on bailout terms.

After a week in which Greece defaulted, shuttered its banks and began rationing cash, Greeks vote on Sunday on whether to accept or reject tough conditions sought by international creditors to extend a lending lifeline that has kept the debt-stricken country afloat. The left-wing government is urging a 'No' vote, saying Greece's European partners are bluffing when they warn that would mean a Greek departure from Europe's single currency, with unforeseeable consequences for Greece, Europe and the global economy. Europeans tried to block IMF debt report on Greece: sources:Friday 3 July 2015. A 'Yes' supporter waves a Greek flag on arrival for the pro-Euro rally at the Panathenean stadium in Athens, Greece on Friday. (REUTERS) Euro zone countries tried in vain to stop the International Monetary Fund (IMF) publishing a gloomy analysis of Greece's debt burden which the leftist government says vindicates its call to voters to reject bailout terms, sources familiar with the situation said on Friday.

The document released in Washington on Thursday said Greece's public finances will not be sustainable without substantial debt relief, possibly including write-offs by European partners of loans guaranteed by taxpayers. It also said Greece will need at least 50 billion euros in additional aid over the next three years to keep itself afloat. Tsipras dismisses Europes warnings to Greece on vote:Friday 3 July 2015. Greece Prime Minister Alexis Tsipras. (REUTERS) Prime Minister Alexis Tsipras rejected European warnings that Greeks will be deciding on their future in the euro zone in a referendum on Sunday, saying negotiations would continue for a better deal with international creditors after the vote.

IMF warns of huge financial hole as Greek vote looms:Friday 3 July 2015. The word 'No' in Greek is seen on a banner hanging from Athens' University building in Athens, Greece. (REUTERS) The International Monetary Fund delivered a stark warning on Thursday of the huge financial hole facing Greece as angry and uncertain voters prepare for a referendum that could decide their country's future in Europe. Days after Greece defaulted on part of its IMF debt, the Fund, part of the lenders' "troika" behind successive international bailouts, said Greece needed an extra € 50 billion over the next three years, including 36 billion from its European partners, to stay afloat.