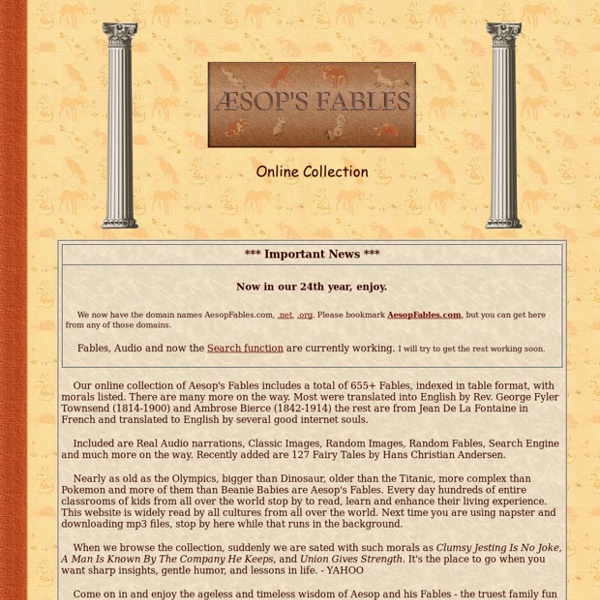 Our online collection of Aesop's Fables includes a total of 655+ Fables, indexed in table format, with morals listed. There are many more on the way. Most were translated into English by Rev. George Fyler Townsend (1814-1900) and Ambrose Bierce (1842-1914) the rest are from Jean De La Fontaine in French and translated to English by several good internet souls. Included are Real Audio narrations, Classic Images, Random Images, Random Fables, Search Engine and much more on the way. Recently added are 127 Fairy Tales by Hans Christian Andersen.

compcolts - English Curriculum Resources Skip to main content Create interactive lessons using any digital content including wikis with our free sister product TES Teach. Get it on the web or iPad! guest Screwy Portraits Andrew Myers uses common screws - up to 10,000 of them at a time, to creates these wonderful three-dimensional portraits. Many Myths, Greek Mythology - Ancient Greece for Kids The ancient Greeks told stories about their gods. These stories are called myths (short for mythology, or stories about gods.) Stories about the ancient Greek gods are still told today. Each storyteller told the stories in their own way, but whatever power and personality a god had was consistent from story to story. For example, Zeus was the king of all the gods, and only Zeus could throw lightning bolts. The magical world of the ancient Greek gods was a world full of bickering and fights and wars and compromise and fear and fun and punishment and love.

40 websites that will make you cleverer right now The indexed web contains an incredible 14 billion pages. But only a tiny fraction help you improve your brain power. Here are 40 of the best. whizzpast.com – Learn about our awe inspiring past all in one wonderful place. khanacademy.org – Watch thousands of micro-lectures on topics ranging from history and medicine to chemistry and computer science. freerice.com – Help end world hunger by correctly answering multiple-choice quizzes on a wide variety of subjects.

Great Short Stories for Teaching Theme in Fiction Great Short Stories for Teaching Theme These short stories are excellent for teaching theme in fiction. Use the accompanying writing lesson ideas to engage students. Teaching Theme the Hard Way CHIEF SEATTLE'S LETTER CHIEF SEATTLE'S LETTER "The President in Washington sends word that he wishes to buy our land. But how can you buy or sell the sky? the land? The idea is strange to us. If we do not own the freshness of the air and the sparkle of the water, how can you buy them? Every part of the earth is sacred to my people. Native American Legends (Folklore, Myths, and Traditional Indian Stories) Indigenous languages Native American cultures What's new on our site today! This page is our collection of Native American folktales and traditional stories that can be read online. We have indexed these stories tribe by tribe to make them easier to locate; however, variants on the same native legend are often told by American Indians from different tribes, especially if those tribes are kinfolk or neighbors to each other.

The Partially Examined Life Philosophy Podcast We’ve done a lot of episodes now, and even we lose track of where we’ve been. We aim (among other things) to present the equivalent of an introductory course in all the major areas of philosophy. Here’s where I’ll periodically comment on our progress. Feel free to weigh in on our direction suggest additional topics as comments to this page. Jump to a Category:EthicsPolitical PhilosophyEpistemologyMetaphysicsPhilosophy of ArtPhilosophy of ReligionOther Topics Ethics We’re doing pretty well here, with the three main types covered: -Consequentialism (episode 9 on Bentham and Mill), which starts ethics by determining what’s the optimal state of affairs.

J.R.R. Tolkien Reads from The Lord of the Rings and Sings “Sam’s Rhyme of the Troll” in a Rare Recording By Maria Popova In the summer of 1952, sixty-year-old J.R.R. Tolkien (January 3, 1892–September 2, 1973) encountered a tape recorder for the first time, which resulted in some wonderful archival audio of the beloved author reading from The Hobbit. So enchanted was Tolkien with this novel technology that he proceeded to record himself reading much of his work over the years to come. Reader Eugene F.