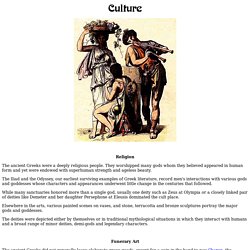 They worshipped many gods whom they believed appeared in human form and yet were endowed with superhuman strength and ageless beauty. The Iliad and the Odyssey, our earliest surviving examples of Greek literature, record men's interactions with various gods and goddesses whose characters and appearances underwent little change in the centuries that followed.

While many sanctuaries honored more than a single god, usually one deity such as Zeus at Olympia or a closely linked pair of deities like Demeter and her daughter Persephone at Eleusis dominated the cult place. Elsewhere in the arts, various painted scenes on vases, and stone, terracotta and bronze sculptures portray the major gods and goddesses. The deities were depicted either by themselves or in traditional mythological situations in which they interact with humans and a broad range of minor deities, demi-gods and legendary characters. Funerary Art Men Women Children. Greek Culture and Traditions - Where the West Meets the East. Culture: Greek Customs. Greek Customs Christmas in Greece Christmas (Xristougenna), the Feast of the Nativity of Jesus is one of the most joyful days of the Greek Orthodox Church. 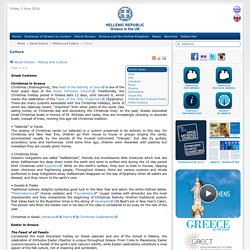 Traditionally, the Christmas holiday period in Greece lasts 12 days, until January 6, which marks the celebration of the Feast of the Holy Theophany (Epiphany). There are many customs associated with the Christmas holidays, some of which are relatively recent, “imported” from other parts of the world (like eating turkey on Christmas day and decorating the Christmas tree). In the past, Greeks decorated small Christmas boats in honour of St.

Nicholas and today, they are increasingly choosing to decorate boats, instead of trees, reviving this age-old Christmas tradition. • "Kalanda" or CarolsThe singing of Christmas carols (or kalanda) is a custom preserved in its entirety to this day. . • Christmas ElvesGreece’s hobgoblins are called "kallikántzari”, friendly but troublesome little creatures which look like elves. A Guide to Greek Drinks and Drinking. 832 57Google +1 32 18 50.3K Drinking alcoholic beverages has a symposium-like and festive quality abundant at celeberations in Greece, especially on name days, birthdays, holidays, weddings, gatherings, graduations and christenings. 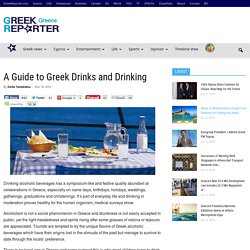 It’s part of everyday life and drinking in moderation proves healthy for the human organism, medical surveys show. Alcoholism is not a social phenomenon in Greece and drunkness is not easily accepted in public, yet the light-headedness and spirits rising after some glasses of retsina or tsipouro are appreciated. Tourists are tempted to try the unique flavors of Greek alcoholic beverages which have their origins lost in the shrouds of the past but manage to survive to date through the locals’ preference. There is no legal age in Greece and some suggest this is why most children learn to drink moderately. Tsipouro. Customs and traditions in Greece. Customs whose origins are lost in the mists of time. 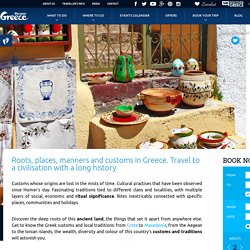 Cultural practises that have been observed since Homer’s day. Fascinating traditions tied to different clans and localities, with multiple layers of social, economic and ritual significance. Rites inextricably connected with specific places, communities and holidays. Discover the deep roots of this ancient land, the things that set it apart from anywhere else.

FOOD IN GREECE. Perhaps it would be best if we started this topic by answering the question, "what do Greeks eat? 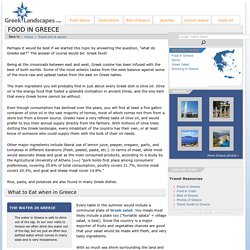 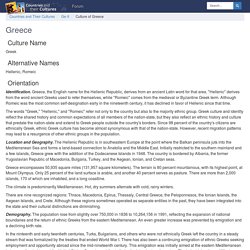 Greece, the English name for the Hellenic Republic, derives from an ancient Latin word for that area. "Hellenic" derives from the word ancient Greeks used to refer themselves, while "Romeic" comes from the medieval or Byzantine Greek term. Culture in Greece and society today. Greek Wines: 7 Greek Varietals to Know. Though they’ve been around for four millennia, Greek wines are a bit overlooked today. 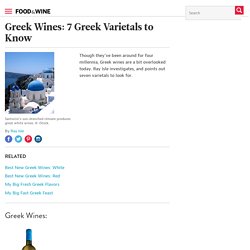 Ray Isle investigates, and points out seven varietals to look for. Greek Wines: Greek wines may be the most underrated on the planet. Why is a mystery, as the Greeks have been making wine since around 2000 BC. (Perhaps the oracle at Delphi might have an answer?) Seven Greek Varietals to Know: 1. (ah-gee-or-gee-tee-ko): This grape produces lush, velvety reds with black-cherry flavors. 2. (ah-sir-tee-ko): A source of minerally, bone-dry, citrus-edged white wines. 3. (ah-thee-ree): Wines from this white variety often have a scent of stone fruits, like nectarines. 4. (mah-la-goo-see-ah): This melony, jasmine-scented white was on the brink of extinction before winemaker Evangelos Gerovassiliou began growing it again. 5. Greek Meals and Customs.

Greeks don’t like being alone and don’t think that anyone or even any thing should ever be alone. 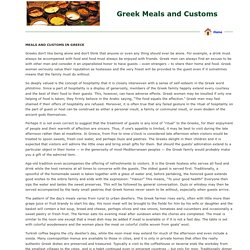 For example, a drink must always be accompanied with food and food must always be enjoyed with friends. Greek men can always find an excuse to be with other men and consider it an unparalleled honor to have guests – even strangers – to share their home and food. Greek women seriously value their reputation as hostesses and the very finest will be provided to the guest even if it sometimes means that the family must do without. Greek food and Wines. Greek food and wine is an important aspect of the culture of Greece. 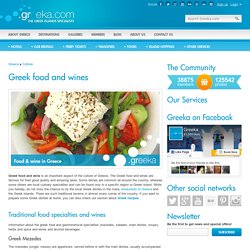 The Greek food and wines are famous for their good quality and amazing taste. Some dishes are common all around the country, whereas some others are local culinary specialties and can be found only in a specific region or Greek island. While you holiday, do not miss the chance to try the local Greek dishes in the many restaurants of Greece and the Greek islands. There are such traditional taverns in almost every corner of the country. If you want to prepare some Greek dishes at home, you can also check our section about Greek recipes.