2015-EQM-01_Dor.pdf. Greek Bastardy in the Classical and Hellenistic Periods: Daniel Ogd - Oxfor. Societies are defined at their margins. 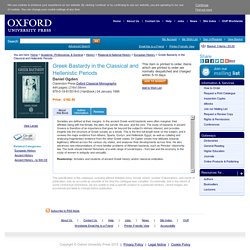 In the ancient Greek world bastards were often marginal, their affinities being with the female, the alien, the servile, the poor, and the sick. The study of bastardy in ancient Greece is therefore of an importance that goes far beyond the subject's intrinsic interest, and provides insights into the structure of Greek society as a whole. This is the first full-length book on the subject, and it reviews the major evidence from Athens, Sparta, Gortyn, and Hellenistic Egypt, as well as collating and analysing fragmentary evidence from the other Greek states. Dr Ogden shows how attitudes towards legitimacy differed across the various city states, and analyses their developments across time. He also advances new interpretations of more familiar problems of Athenian bastardy, such as Pericles' citizenship law. Readership: Scholars and students of ancient Greek history and/or classical civilization.

Bernanke 'Irresponsible' to Compare US to Greece. On Greek PSI - Headlines And Reality. Submitted by Peter Tchir of TF Market Advisors, The Greek PSI is once again (still) hitting the headlines. 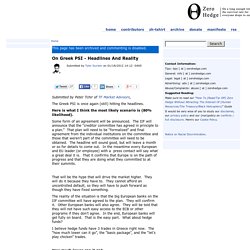 Here is what I think the most likely scenario is (80% likelihood). Some form of an agreement will be announced. Four more eurozone countries ask Greece for collateral. (1) What is fundamentally wrong with the Greek economy? - Quora. Bruegel sur Twitter : "US and UK banks have been increasing their Greek exposure again #greekdebt @SMerler. Testosterone Pit - Home - Bankrupt Cyprus And The Russian Connection. The Republic of Cyprus, with its 840,000 people, has been in the Eurozone for less than five years. 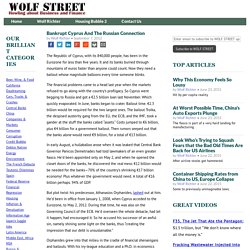 It and its banks burned through mountains of euros faster than anyone could count. Now they need a bailout whose magnitude balloons every time someone blinks. The financial problems came to a head last year when the markets refused to go along with the country’s profligacy. So Cyprus went begging to Russia and got a €2.5 billion loan last November. Which quickly evaporated. All S&P sovereign credit ratings in order from Australia to Greece for Janu. It's Only Just Beginning In Europe As Principal and Interest Payments Rise.

It seems that Greece has managed to scrape together left-over medals from the Olympics and sell some fish in order to meet the interest payments so far but a closer look at the debt distributions - both interest and principal sends a worrying message. 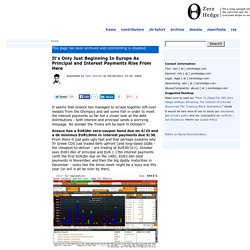 No wonder the Troika will be back in October!! Greece has a EUR2bn zero-coupon bond due on 9/23 and a de minimus EUR13mm in interest payments due 9/30. Managing Greek default risks. Many in Europe continue to believe in the permanence of the Eurosystem. 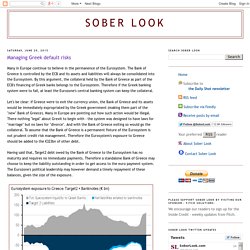 The Bank of Greece is controlled by the ECB and its assets and liabilities will always be consolidated into the Eurosystem. By this argument, the collateral held by the Bank of Greece as part of the ECB's financing of Greek banks belongs to the Eurosystem. Therefore if the Greek banking system were to fail, at least the Eurozone's central banking system can keep the collateral. E.C.B. Could Be Power Broker in Greek Debt Crisis. FRANKFURT — As Athens and Brussels engage in a showdown over Greek debt, the ultimate power broker may reside in neither of those European capitals. 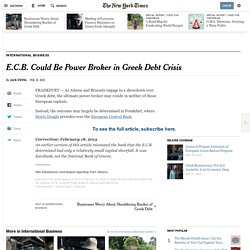 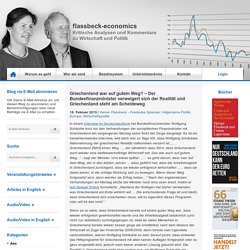 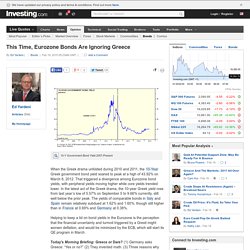 That triggered a divergence among Eurozone bond yields, with peripheral yields moving higher while core yields trended lower. Greek statistics are back: Primary deficit presented as surplus, with Eurostat’s seal of approval. Have you heard the one about Greece’s Eurostat-approved 2013 primary surplus? 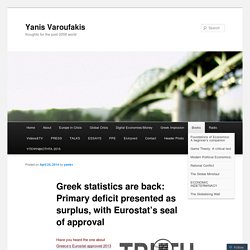 Greece is Playing to Lose by Anatole Kaletsky. LONDON – The future of Europe now depends on something apparently impossible: Greece and Germany must strike a deal. 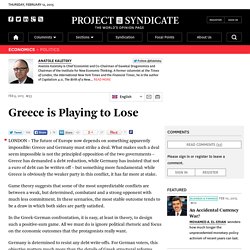 Economist and Finance Minister for the Greek government Yanis... Nachrichtenfoto. Greece’s Feisty Finance Minister Tries a More Moderate Message. Photo ATHENS — In the first days after the election victory of the leftist party Syriza in , Yanis Varoufakis, the new finance minister, has lobbed some rhetorical grenades, referring to his country’s foreign-imposed austerity budgets as “fiscal waterboarding” and calling Greece’s international bailout deals “a toxic mistake.” Now, faced with the need to make good on promises to negotiate debt relief for his beleaguered nation, he seems eager to send a more moderate message. During an interview on Thursday morning in his office, Mr. Varoufakis, 53, poured a cup of coffee and took a large swallow. It had been a late night. Young, gifted and Greek: Generation G – the world’s biggest brain drain.

Call them Generation G: young, talented, Greek – and part of the biggest brain drain in an advanced western economy in modern times. As the country lurches towards critical elections this weekend, more than 200,000 Greeks who have left since the crisis bit five years ago will watch from overseas. Cheap Greece Holidays & Deals 2015. Magic and Mezze There is a reason why so many tourists return year after year to Greece for their summer holidays. The way of life here is so laid back, the people are as warm as the weather, the beaches are perfect and the prices reasonable... the list is endless.

Another highlight is Greek food, endless plates of Mezze such as Dolmades & meatballs... meaty mains such as Kleftiko, Souvlaki and Stifado or honey laden baklava pastry. The Grexit Proposal - Positive Money. Written by Frank Van Lerven on . It is no secret that tensions are high between Greece, Germany, the Troika, and the rest of Eurozone creditors. There is a lot of posturing from both sides, and much has been said about a potential ‘Grexit’ (Greek exit). "Merkel erzählt Quatsch": Wohin mit den Griechen, Herr Prof. Otte. Wirtschaft Donnerstag, 23.

April 2015. Europe needs a hegemonic Germany. For six decades Germany was being pampered by a hegemonic America that oversaw the write-off of its wartime debts, the reversal of Allied designs to de-industrialise it and, above all else, the constant generation of the global demand which allowed German manufacturers to concentrate on efficiently producing quality, desirable wares. Having taken all this for granted for too long, Germany’s elites are now finding it conceptually difficult to come to terms with the new ‘normal’: A world in which sufficient aggregate demand is no longer maintainable by the United States, or any other single bloc, and in which Germany can no longer take for granted the demand for its goods.A world in which there is no room for a Eurozone that operates like an augmented Germany.

But what would a hegemonic Germany do? It will be worried about something beyond fiscal rectitude and market reforms. It will know that a supply of high quality products does not automatically create its own demand. Who’s (still) exposed to Greece? Since the start of the crisis, the structure of Greek debt has changed considerably (almost 80 percent of government financial liabilities are now accounted for by loans, against slightly less than 20 percent back in 2008). At the same time, the weight of public creditors has increased among the creditors of the government. Figure 1 shows a breakdown of the Greek general government financial liabilities across the main creditor sectors (with public creditor included in non-residents).

At the end of 2013, debt due to official creditors amounted to 216 billion of loans (IMF/EU loans) and 38 billion of securities (under SMP). This means that, at the end of 2013, official creditors accounted for about 94 percent of the total loans due to non-residents and 89 percent of the total securities held by non residents. Griechenland war auf gutem Weg? – Der Bundesfinanzminister verweigert sich. On Greece, Europe should listen to the IMF. Griechische Unternehmer bekommen keinen Kredit.