Institute for Ethics and Emerging Technologies: Publications. The Journal of Evolution and Technology (JET) is a scholarly peer-reviewed journal published by the IEET. 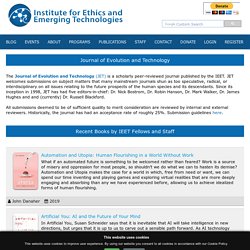 Must-know terms for the 21st Century intellectual: Redux. Blog posts can be strange and unpredictable things. 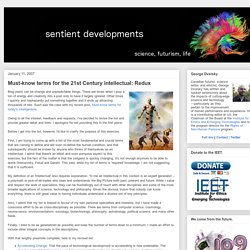 There are times when I pour a ton of energy and creativity into a post only to have it largely ignored. Other times I quickly and haphazardly put something together and it ends up attracting thousands of hits.

Articles. LifeNaut. RIP futurist Shulamith Firestone, who hailed artificial wombs and cybernetics as tools of liberation. 25 years later: Donna Haraway's "A Cyborg Manifesto" Designer Psychologies: Moving beyond neurotypicality. Designer psychologies, or customized cognitive processing modalities, describes the potential for future individuals to selectively alter the specific and unique ways in which they take in, analyze and perceive the world. Cognitive modalities are the psychological frameworks that allow for person-to-person variances in subjectivity, including such things as emotional responses, social engagement, aesthetics and prioritization. Humans With Amplified Intelligence Could Be More Powerful Than AI.

Yes, One Person Could Actually Destroy the World. 9 Ways Humanity Could Bring About Its Own Destruction. It all started with David Chalmer's various thought experiments concerning qualia and something called philosophical zombies: A p-zombie is essentially a creature that in all ways appears to be conscious, but isn't really conscious. 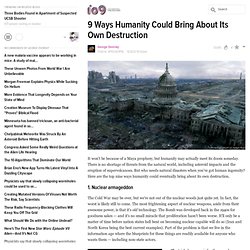 Chalmers proposed a thought experiment where the inputs an outputs of a growing number of neurons in a person's skull are gradually routed into a growing collection of artificial neurons. The person is given a switch that allows them a to switch back and forth between their natural neurons and the synthetic ones. The person can then try switching back and forth at any level of replacement. Michio Kaku: The Dark Side of Technology. We're Underestimating the Risk of Human Extinction - Ross Andersen. Unthinkable as it may be, humanity, every last person, could someday be wiped from the face of the Earth. 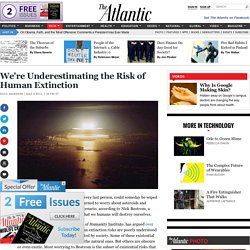 We have learned to worry about asteroids and supervolcanoes, but the more-likely scenario, according to Nick Bostrom, a professor of philosophy at Oxford, is that we humans will destroy ourselves. Bostrom, who directs Oxford's Future of Humanity Institute, has argued over the course of several papers that human extinction risks are poorly understood and, worse still, severely underestimated by society. Some of these existential risks are fairly well known, especially the natural ones.

Transhumanism: The Most Dangerous Idea? "What ideas, if embraced, would pose the greatest threat to the welfare of humanity? 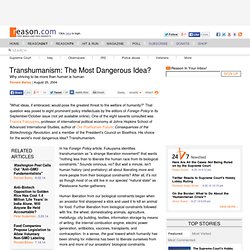 " That question was posed to eight prominent policy intellectuals by the editors of Foreign Policy in its September/October issue (not yet available online). One of the eight savants consulted was Francis Fukuyama, professor of international political economy at Johns Hopkins School of Advanced International Studies, author of Our Posthuman Future: Consequences of the Biotechnology Revolution, and a member of the President's Council on Bioethics.

Bostrom Responds to Fukuyama’s Assertion that Transhumanism is World’s Most Dangerous Idea. Nick Bostrom (Sept 10, 2004) “What idea, if embraced, would pose the greatest threat to the welfare of humanity?” 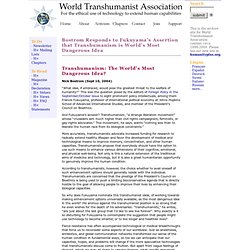 This was the question posed by the editors of Foreign Policy in the September/October issue to eight prominent policy intellectuals, among them Francis Fukuyama, professor of international political economy at Johns Hopkins School of Advanced International Studies, and member of the President’s Council on Bioethics. And Fukuyama’s answer? Transhumanism, “a strange liberation movement” whose “crusaders aim much higher than civil rights campaigners, feminists, or gay-rights advocates.” Transhumanism, medical technology and slippery slopes. Transhumanism, medical technology and slippery slopes. Most parents not quite ready to have 'designer babies' A new study by researchers at NYU Langone Medical Center indicates that consumers are more interested in using genetic technologies to screen for life threatening diseases than in using the technologies to screen offspring for enhanced traits. 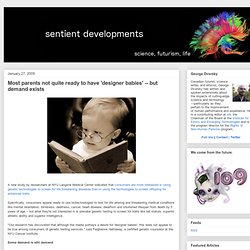 Specifically, consumers appear ready to use biotechnologies to test for life altering and threatening medical conditions like mental retardation, blindness, deafness, cancer, heart disease, dwarfism and shortened lifespan from death by 5 years of age -- but what they're not interested in is prenatal genetic testing to screen for traits like tall stature, superior athletic ability and superior intelligence. "Our research has discovered that although the media portrays a desire for 'designer babies', this does not appear to be true among consumers of genetic testing services," said Feighanne Hathaway, a certified genetic counselor at the NYU Cancer Institute.

Some demand is still demand Let's look at the results of this report a bit more closely. What will jail terms be like when humans can live for centuries? Would it be boring if we could live forever? Okay, on the primary question raised by the article, would immortality be boring? 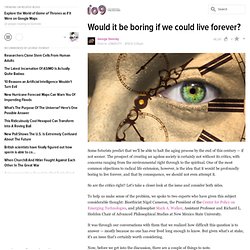 No, Extreme Human Longevity Won’t Destroy the Planet. "Longevity" isn't the same as "Can't be shot". 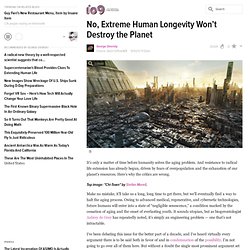 To which I counter with ageless Lisa Simpsons, ageless Gandhis, ageless Malcolm X's, ageless John Lennons. People only assume the bad guys will be ageless. There is no justification to assume that. Past greatness does not imply future greatness, or even usefulness. Would Immortality Become An Overpopulation Nightmare? By Ira Rosofsky, Ph.D. 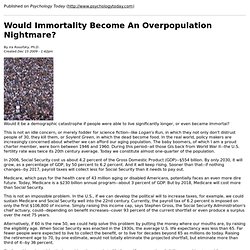 Would it be a demographic catastrophe if people were able to live significantly longer, or even became immortal? This is not an idle concern, or merely fodder for science fiction--like Logan's Run, in which they not only don't distrust people of 30, they kill them, or Soylent Green, in which the dead become food. In the real world, policy makers are increasingly concerned about whether we can afford our aging population. The baby boomers, of which I am a proud charter member, were born between 1946 and 1960.

During this period--all those GIs back from World War II--the U.S. fertility rate was twice its 20th century average. In 2006, Social Security cost us about 4.2 percent of the Gross Domestic Product (GDP)--$554 billion. Medicare, which pays for the health care of 43 million aging or disabled Americans, potentially faces an even more dire future. Transcription of my Longevity Dividend Seminar talk. [Via IEET: "People Database Project Blog recorded and transcribed George Dvorsky's and Anders Sandberg’s talks from the IEET’s July 23rd Longevity Dividend Seminar. Thanks!] Popular Arguments For and Against Longevity. Can we build an artificial superintelligence that won't kill us? SExpand At some point in our future, an artificial intelligence will emerge that's smarter, faster, and vastly more powerful than us.

Once this happens, we'll no longer be in charge. Why a superintelligent machine may be the last thing we ever invent. "...why would a smart computer be any more capable of recursive self-improvement than a smart human? " I think it mostly hinges on how artificial materials are more mutable than organic ones. We humans have already already developed lots of ways to enhance our mental functions, libraries, movies, computers, crowdsourcing R&D, etc.

But most of this augmentation is done through offloading work onto tools and machinery external to the body. But to actually change the brain itself has been very slow going for us. 7 Totally Unexpected Outcomes That Could Follow the Singularity. Stephen Hawking Says A.I. Could Be Our 'Worst Mistake In History' You have to understand Stephen Hawking's mind is literally trapped in a body that has betrayed him. ​The Worst Lies You've Been Told About the Singularity. How Much Longer Before Our First AI Catastrophe? How long before superintelligence? The Fermi Paradox: Back with a vengeance. Are You Living in a Simulation? The myth of the starship. How to Measure the Power of Alien Civilizations Using the Kardashev Scale. Answering the Fermi Paradox: Exploring the Mechanisms of Universal Transcension, John Smart, 2002-2010.

How to build a Dyson sphere in five (relatively) easy steps. If you have energy, you can launch as much mass as you want into space. How Self-Replicating Spacecraft Could Take Over the Galaxy. Some of the Most Plausible Scenarios for Alien Civilizations. How will we build an artificial human brain? Re-Evolving Mind, Hans Moravec, December 2000. Goertzel Contra Dvorsky on Mind Uploading. How Much Longer Until Humanity Becomes A Hive Mind? You Might Never Upload Your Brain Into a Computer. Brain-emulation-roadmap-report. Why You Should Upload Yourself to a Supercomputer. Would You Still Love Me If I Was A Robot? Could a single pill save your marriage? Moral Brain Conference Summary with Twitter Round-up. Deathist Nation. The Future of Death. Interview with Aubrey de Grey, PhD. Craig Venter's new longevity startup will make "100 the new 60" Why Supercentenarians Hold the Key to Extended Life. Do these startling longevity studies mean your lifespan could double?

The Fable of the Dragon-Tyrant. Eight tips to dramatically improve your chances of living forever. PrintVersionMagic. Aubrey de Grey: A roadmap to end aging. NBIC_report.pdf. New $1.6 billion supercomputer project will attempt to simulate the human brain. How to Live Forever By Turning Your Brain Into Plastic. Cognitive enhancement: All on the mind. Sebastian Seung: I am my connectome. NBIC_report.pdf. Nanotechnology and Radically Extended Life Span. Human Enhancement and Nanotechnology. What is nanotechnology? How Medical Nanotech Will Change Humanity Forever. Controversial fertility treatment requiring three genetic parents given thumbs up. Ethical questions emerge after baby’s genome sequenced while still in the womb. NBIC_report.pdf. The market for designer babies. Human Genetic Enhancements - A Transhumanist Perspective. A Brief Guide to Genomics. Designer Babies? - Videos. New chemical circuits make becoming a cyborg even cooler.

Aimee Mullins: My 12 pairs of legs. Amber Case at TED: We are all cyborgs now. What does Oscar Pistorius’s success at the Olympics mean for the future of cybernetics? NATURAL BORN CYBORGS? What is Cybernetics? NBIC_report.pdf. 9 Overlooked Technologies That Could Transform The World. 10 mindblowingly futuristic technologies that will appear by the 2030s. Ray Kurzweil: The accelerating power of technology. Transhumanism: The Most Dangerous Idea? Bostrom Responds to Fukuyama’s Assertion that Transhumanism is World’s Most Dangerous Idea. Institute - Bioethics - Articles/News - The Transhumanists: