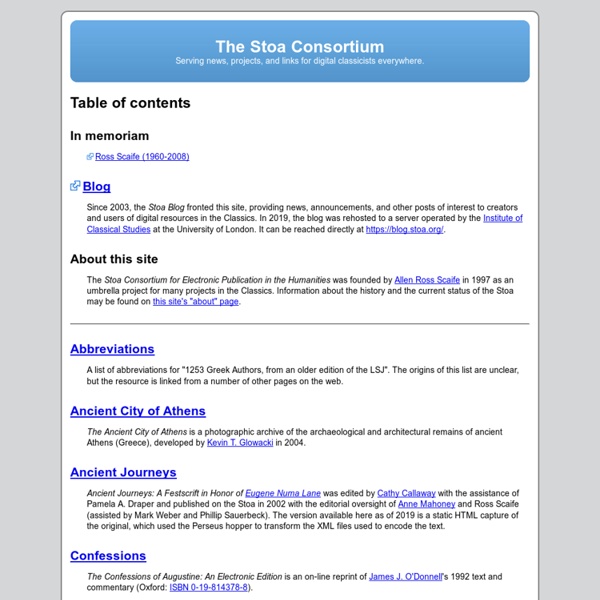 Ontologies for Prosopography: workshop at DH 2014, Lausanne (July 8) Digital Humanities 2014: Workshop Lausanne, Switzerland 8th July, 2014 To register, go to the Digital Humanities 2014 website. Ontologies for Prosopography: Who’s Who? or, Who was Who? Linked data has become an increasingly popular fixture in digital humanities research because it offers a way to break out of the data silos that are constantly being created, and provides a framework for new ways of approaching research questions.

Maecenas: Images of Ancient Greece and Rome 408,330 visitors before 21 March, 2002, visitors since then Images are copyrighted, but may be used for non-commercial purposes. Click here to see the images If the search engine is out of service, you can use back-up search engine. Also, the back-up search engine may index recent additions of images sooner than the main search engine does. The Confessions of Augustine: electronic edition This document is an on-line reprint of Augustine: Confessions, a text and commentary by James J. O'Donnell (Oxford: 1992; ISBN 0-19-814378-8). The text and commentary were encoded in SGML by the Stoa Consortium in co-operation with the Perseus Project; the HTML files were generated from the archival SGML version. Each book of the text has a link to introductory commentary on that book, and each section of the text has a link to detailed comments on the section.

Roman Army Part I The Roman Army in the Late Republic and Early Empire NB: Over the centuries, the Roman army changed and developed, and conditions often differed somewhat depending on the provinces where the troops were fighting and stationed. The following information is intended to give a generic picture of military organization, armor, weaponry, etc. during the late Republic and early Empire. LEGIONS (legio): The legion was the basic unit of Rome's standing army of career soldiers, the legionaries, who were all Roman citizens and fought primarily as foot-soldiers (infantry). Diotima: Women & Gender in the Ancient World Call for Collaborators to The On-line Companion to The Worlds of Roman Women The On-Line Companion to the Focus Reader, The Worlds of Roman Women, expands the book's wide representation of Latin texts by and about women dating from the earliest periods through the fourth century CE. The medium of a website, moreover, offers the opportunity to integrate visuals to texts, thus enabling users to make connections between language and material culture. The Companion has two major parts. The Worlds section includes Class, Religion, Childhood, Learning, Marriage, Family, Body, State, Work, and Flirtation. Each World opens to reveal a thematic image of women in this world, a brief essay on this World, a list of on-line texts and hyperlinked images.

General History Resources General History Web Sites and Resources PBS Online PBS has a great source for information on a myriad of historical events and personalities. PBS’s assorted and diverse web exhibits supplement specific individual television series and generally include a resume of each episode, interviews (often with sound bites), a timeline , a glossary, photos, and links to relevant sites. Categories include American History, World History, History on Television, and Biographies. eSharp eSharp is an international online journal for postgraduate research in the arts, humanities, social sciences and education. Based at the University of Glasgow and run entirely by graduate students, it aims to provide a critical but supportive entry into the realm of academic publishing for emerging academics, including postgraduates and recent postdoctoral students. One of our aims is to encourage the publication of high quality postgraduate research; therefore all submitted articles are anonymously double-blind peer reviewed as part of the acceptance and feedback process. This rigorous and constructive process is designed to enhance the worth of postgraduate and postdoctoral work. eSharp also engages in training postgraduate students in the various tasks that running an academic journal requires.

Roman Names There are indications that in the ancient times Romans possessed only one name like the most Indo-European peoples. By the Republican period of the Roman history, a stable naming system, called „tria nomina“ developed and was actively used. The full name consisted of a praenomen, a nomen gentilicium and a cognomen. Herodotus Timemap Book 1, Ch. 1 This is the display of the inquiry of Herodotus of Halicarnassus, so that things done by man not be forgotten in time, and that great and marvelous deeds, some displayed by the Hellenes, some by the barbarians, not lose their glory, including among others what was the cause of their waging war on each other.The Persian learned men say that the Phoenicians were the cause of the dispute. These (they say) came to our seas from the sea which is called Red, and having settled in the country which they still occupy, at once began to make long voyages. Among other places to which they carried Egyptian and Assyrian merchandise, they came to Argos,which was at that time preeminent in every way among the people of what is now called Hellas.

Cartographic Images Home Page This site is sponsored by Henry Davis Consulting as an educational service. Web hosting provided and sponsored by Phoenix.Volant. Please visit our sponsors. A new and improved version of this web site has been established at the following URL: Please visit the new site to see additional maps and associated monographs

Diogenes Home Page Diogenes is a tool for searching and browsing the databases of ancient texts, primarily in Latin and Greek, that are published by the Thesaurus Linguae Graecae and the Packard Humanities Institute. (NB. These databases are not distributed with Diogenes and must be obtained separately.) Latest News Note on Mavericks (Update). DHQ: Digital Humanities Quarterly: Digital Geography and Classics Changing the Center of Gravity: Transforming Classical Studies Through Cyberinfrastructure2009Volume 3 Number 1 Abstract The authors open by imagining one possible use of digital geographic techniques in the context of humanities research in 2017. They then outline the background to this vision, from early engagements in web-based mapping for the Classics to recent, fast-paced developments in web-based, collaborative geography. The article concludes with a description of their own Pleiades Project ( which gives scholars, students and enthusiasts worldwide the opportunity to use, create and share historical geographic information about the Greek and Roman World in digital form. As I settle into my chair, a second cup of morning coffee in my hand, an expansive view of the eastern Mediterranean fades in to cover the blank wall in front of me.

Histoire : les grandes dates de l'histoire du monde If you do not want to see ads based on anonymous behavioural data, you can opt-out according to the OBA regularities. About the campaigns in this ad (read left to right and top to bottom): Campaign no. 1 is provided by

Ancient Atlas Maps and Geography of the Ancient World Ancient History traditionally starts with the Fertile Crescent (from modern Iraq to Egypt) and focuses mainly on the Mediterranean. To the people in this area, most of the globe was unknown.