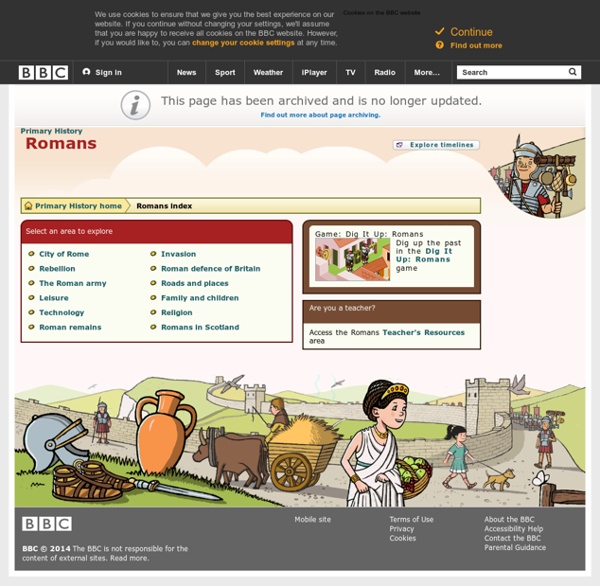 @import '/cs/jst/css/1/ui.css'; @import '/staticarchive/9e4d63c5ac0da0ae80ec2da05421304635896c89.css'; @import '/staticarchive/7215ca2377f5987550aebe3dd17a69ef982d01f3.css'; Cookies on the BBC website We use cookies to ensure that we give you the best experience on our website. We also use cookies to ensure we show you advertising that is relevant to you. If you continue without changing your settings, we'll assume that you are happy to receive all cookies on the BBC website. However, if you would like to, you can change your cookie settings at any time. British Broadcasting Corporation Home Accessibility links This page has been archived and is no longer updated. Primary History Romans Explore timelines <! Select an area to explore Game: Dig It Up: Romans Dig up the past in the Dig It Up: Romans (Needs JavaScript) game Are you a teacher? Access the Romans Teacher's Resources area BBC iD Sign in BBC navigation BBC links BBC © 2014 The BBC is not responsible for the content of external sites.

Secrets of Lost Empires by Dennis Gaffney Aqueducts are one of the wonders of the Roman Empire. These graceful structures are not only majestic, but are engineering marvels that survive to this day. In "Construct an Aqueduct," you are hired as Chief Water Engineer by the Roman Emperor. Your job: to build an aqueduct that will supply the Roman city of Aqueductis with clean water to private homes, public baths and glorious fountains. Roman Art As of July 1, 2013 ThinkQuest has been discontinued. We would like to thank everyone for being a part of the ThinkQuest global community: Students - For your limitless creativity and innovation, which inspires us all.

Warburg Institute digital copy antiquities Catalogue Articles You are not logged in | My saved items (0 items) | Login Give Feedback The Roman Domus The Roman domus was much more than a place of dwelling for a Roman familia. It also served as a place of business and a religious center for worship. The size of a domus could range from a very small house to a luxurious mansion. In some cases, one domus took up an entire city-block, while more commonly, there were up to 8 domus per insula (city-block). All domus were free-standing structures. Some were constructed like modern-day townhouses with common walls between them, while others were detached.

A History of Surgery By Tim Lambert Ancient Surgery In the stone age some adults had holes cut in their skulls. At least sometimes people survived the 'operation' because the bone grew back. We do not know the purpose of the 'operation'. School - Kingdom, Republic, Empire - Ancient Rome for Kids In its early days, when Rome was a kingdom, kids did not go to school. Education took place in the home and was done by the family. If a family had someone who knew how to read and write, the boys were taught how. They were also taught how to be warriors. Finally, they were taught how to manage the farm or business and how to behave in society.

Home - Classics - LibGuides at Credo Reference Credo LibGuides can be linked to from your institution's webpage. For LibGuides subscribers, these guides may be freely copied and modified to create or supplement your own LibGuides. Learn how to copy a LibGuide. When clicking on the links, your Credo account is accessed by IP authentication or through your institution's proxy server. For help with access issues, contact libguides@credoreference.com