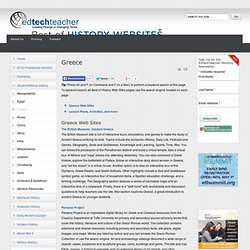 To keyword search all Best of History Web Sites pages use the search engine located on each page. Greece Web Sites The British Museum: Ancient Greece The British Museum site is full of interactive tours, simulations, and games to make the study of Ancient Greece enticing for kids. Topics include the Acropolis, Athens, Daily Life, Festivals and Games, Geography, Gods and Goddesses, Knowledge and Learning, Sparta, Time, War. You can follow the procession of the Panathenaic festival and build a virtual temple, take a virtual tour of Athens and "rope" slaves into attending Assembly. Perseus Project Perseus Project is an impressive digital library for Greek and Classical resources from the Classics Department at Tufts University for primary and secondary source scholarly works that cover the history, literature and culture of the Greco-Roman world. 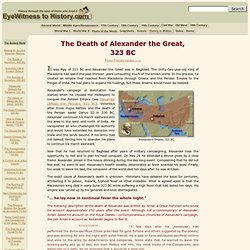 The thirty-two-year-old King of Macedonia had spent the past thirteen years conquering much of the known world. In the process, he created an empire that reached from Macedonia through Greece and the Persian Empire to the fringes of India. He had plans to expand his holdings, but these dreams would never be realized. Alexander's campaign of domination had started when he crossed the Hellespont to conquer the Persian Empire (see Alexander Defeats the Persians, 331 BC). Now that he had returned to Baghdad after years of military campaigning, Alexander took the opportunity to rest and to plan his next conquest. Ancient Greek Government. The Greeks had a lot of different kinds of governments, because there were many different city-states in ancient Greece, and they each had their own government. 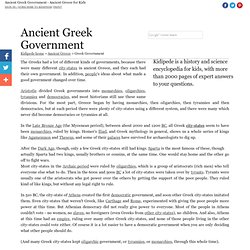 In the Late Bronze Age (the Mycenean period), between about 2000 and 1200 BC, all Greek city-states seem to have been monarchies, ruled by kings. Homer's Iliad, and Greek mythology in general, shows us a whole series of kings like Agamemnon and Theseus, and some of their palaces have survived for archaeologists to dig up. 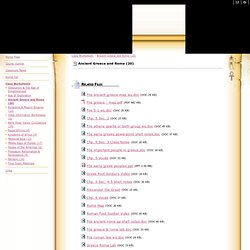 [ The Greeks ] - Educational Resources - Lesson 1. Introduction During the 5th century BC, Greece was dominated by two main powers: democratic Athens and the military oligarchy of Sparta. 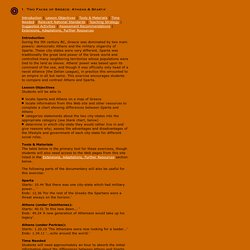 These city-states were very different. Sparta was traditionally the great land power of the Greek world and controlled many neighboring territories whose populations were tied to the land as slaves. Athens' power was based upon its command of the sea, and though it was officially only head of a naval alliance (the Delian League), in practice this amounted to an empire in all but name. This exercise encourages students to compare and contrast Athens and Sparta. An Ancient Odyssey. Note: This lesson was originally published on an older version of The Learning Network; the link to the related Times article will take you to a page on the old site. 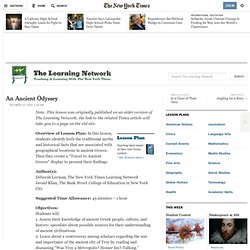 Overview of Lesson Plan: In this lesson, students identify both the traditional myths and historical facts that are associated with geographical locations in ancient Greece. Then they create a “Travel to Ancient Greece” display to present their findings. Author(s): Deborah Lerman, The New York Times Learning Network Javaid Khan, The Bank Street College of Education in New York City Suggested Time Allowance: 45 minutes – 1 hour Objectives:Students will: 1. Activities / Procedures:NOTE TO TEACHER: This lesson plan focuses on the civilization of ancient Greece through research pertaining to specific locations within that region; however, you may substitute other ancient sites associated with other ancient cultures if they are more relevant to your current curriculum. 1.

Extension Activities:1. Gregory Nagy Interview: The Greek Hero in the Classics. Faculty insight: Gregory Nagy Gregory Nagy sits down with Jenny Attiyeh of ThoughtCast to discuss classics like the Iliad and how studying the classics gives us a better understanding of humanism. 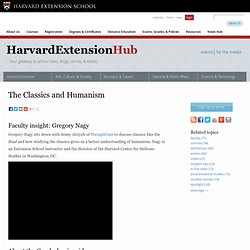