The subjugation of Greece

Greece Is A Nation Under Occupation. Greece, the Sacrificial Lamb. Greece – What You are not Being Told by the Media. Every single mainstream media has the following narrative for the economic crisis in Greece: the government spent too much money and went broke; the generous banks gave them money, but Greece still can’t pay the bills because it mismanaged the money that was given. 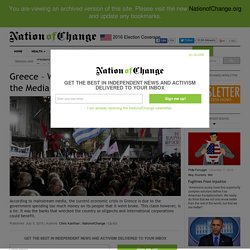 It sounds quite reasonable, right? Except that it is a big fat lie … not only about Greece, but about other European countries such as Spain, Portugal, Italy and Ireland who are all experiencing various degrees of austerity. It was also the same big, fat lie that was used by banks and corporations to exploit many Latin American, Asian and African countries for many decades. Greece did not fail on its own. It was made to fail. James Galbraith: Greek Revolt Threatens Entire Neoliberal Project. Photo Credit: Shutterstock James K. 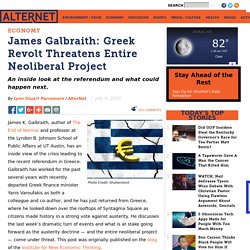 Galbraith, author of The End of Normal and professor at the Lyndon B. Johnson School of Public Affairs at UT Austin, has an inside view of the crisis leading to the recent referendum in Greece. Galbraith has worked for the past several years with recently departed Greek finance minister Yanis Varoufakis as both a colleague and co-author, and he has just returned from Greece, where he looked down over the rooftops of Syntagma Square as citizens made history in a strong vote against austerity. Greece: A debt colony, shackled to its lenders. Story highlights The Greek government has hailed the eurozone finance ministers’ latest decision on Greece, requiring the country to lower its debt in return for bailout funds, as yet another political victory. 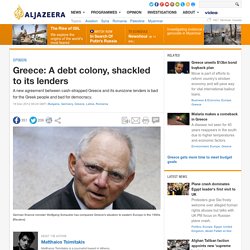 Greece’s solidarity movement: ‘it’s a whole new model – and it’s working’ “A long time ago, when I was a student,” said Olga Kesidou, sunk low in the single, somewhat clapped-out sofa of the waiting room at the Peristeri Solidarity Clinic, “I’d see myself volunteering. 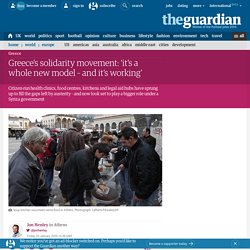 You know, in Africa somewhere, treating sick people in a poor developing country. I never once imagined I’d be doing it in a suburb of Athens.” Few in Greece, even five years ago, would have imagined their recession- and austerity-ravaged country as it is now: 1.3 million people – 26% of the workforce – without a job (and most of them without benefits); wages down by 38% on 2009, pensions by 45%, GDP by a quarter; 18% of the country’s population unable to meet their food needs; 32% below the poverty line.

And just under 3.1 million people, 33% of the population, without national health insurance. Greece: Alternative Economies & Community Currencies Pt. 1. After Crisis, Greeks Work to Promote 'Social' Economy. Greece's 'potato movement' grows in power - Features. Athens, Greece - When an economy shrinks, prices are meant to go down in response to falling demand. 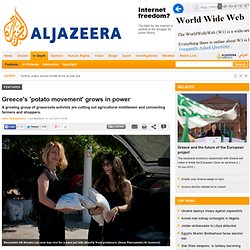 This has not happened in Greece - at least not yet. While the Greek economy shrank by an average of five per cent a year between 2009 and 2011, consumer prices rose by an average 3.7 per cent a year. The combination of falling revenues and rising prices has led to an explosive political mix. Greece: what the potato movement did next. Fun and creativity in public spaces. 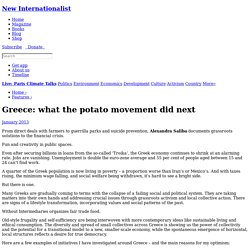 Even after securing billions in loans from the so-called ‘Troika’, the Greek economy continues to shrink at an alarming rate. Jobs are vanishing. Unemployment is double the euro-zone average and 55 per cent of people aged between 15 and 24 can’t find work. The People’s Uber: Why The Sharing Economy Must Share Ownership. Mayor Bill de Blasio recently discovered, during his short-lived campaign against Uber, that saying no to a popular, convenient new technology doesn't tend to win many friends—or win much at all. 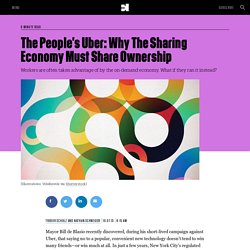 In just a few years, New York City's regulated yellow-taxi fleet has been outnumbered by a distant company with uncertain intentions. There are benefits to this, as well as mounting costs. But critics like Mr. De Blasio won't get very far until they have something to say yes to. Initiative for the non privatization of water in Greece. How could we cope if capitalism failed? Ask 26 Greek factory workers. You could call the men and women at Viome factory workers, but that wouldn’t be the half of it. 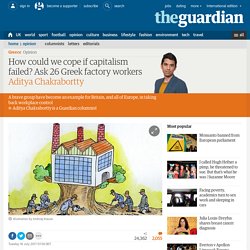