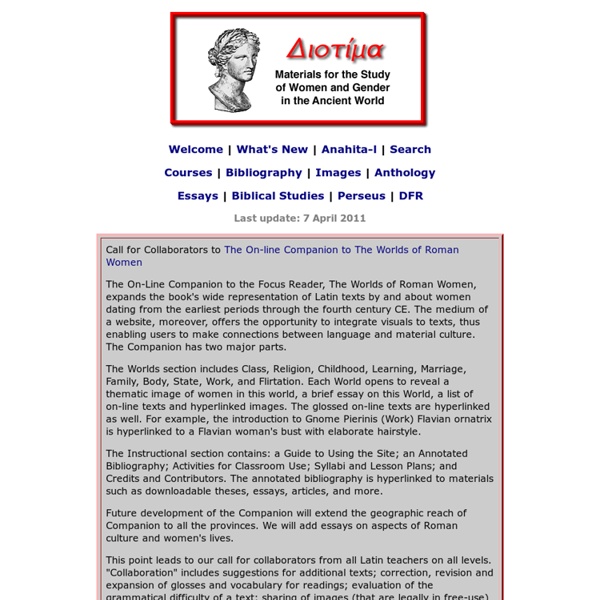 Call for Collaborators to The On-line Companion to The Worlds of Roman Women The On-Line Companion to the Focus Reader, The Worlds of Roman Women, expands the book's wide representation of Latin texts by and about women dating from the earliest periods through the fourth century CE. The medium of a website, moreover, offers the opportunity to integrate visuals to texts, thus enabling users to make connections between language and material culture. The Companion has two major parts. The Worlds section includes Class, Religion, Childhood, Learning, Marriage, Family, Body, State, Work, and Flirtation. Each World opens to reveal a thematic image of women in this world, a brief essay on this World, a list of on-line texts and hyperlinked images. The Instructional section contains: a Guide to Using the Site; an Annotated Bibliography; Activities for Classroom Use; Syllabi and Lesson Plans; and Credits and Contributors.

Maecenas: Images of Ancient Greece and Rome 408,330 visitors before 21 March, 2002, visitors since then Images are copyrighted, but may be used for non-commercial purposes. Click here to see the images If the search engine is out of service, you can use back-up search engine. Direct Democracy, 2.0 Angelika Warmuth/DPA, via Agence France-Presse — Getty Images Members of the Pirate Party attended a conference in Neumünster, Germany, last month. I FIRST took real notice of the Pirates last summer during the campaign for city elections in Berlin. German electioneering is quaint, even faintly musty by American standards. Political advertising mostly takes the form of full-color head shots of the candidates hung on light posts and telephone poles with interchangeable slogans about working for a brighter future.

Women's History Collections at the IISH: Introduction The women who left information about their life and work in the International Institute of Social History were generally involved in the labour movement and other social movements. They were writers, journalists, newspaper publishers, politicians, historians, teachers, artists, nurses or philosophers. They campaigned for humane working conditions and fair wages, for peace, human rights, sexual reform, the improvement of education, health care, or better housing. They were socialists, Marxists, Trotskyists or anarchists. Diotima (reprinted with permission of journal and author from ELECTRONIC ANTIQUITY, Vol. 4 Issue 1 - August 1997) Ambiguity and the Female Warrior: Vergil's Camilla Trudy Harrington Becker Classical Studies Program, Center for Interdisciplinary Studies, Virginia Tech, Blacksburg, Virginia 24061-0227, U.S.A. e-mail: thbecker@vt.edu In Book 7 of Vergil's Aeneid, the maiden warrior Camilla leads her people to join the forces of Turnus, who prepares for battle against his fated adversary, the Trojan Aeneas.

Herodotus Timemap Book 1, Ch. 1 This is the display of the inquiry of Herodotus of Halicarnassus, so that things done by man not be forgotten in time, and that great and marvelous deeds, some displayed by the Hellenes, some by the barbarians, not lose their glory, including among others what was the cause of their waging war on each other.The Persian learned men say that the Phoenicians were the cause of the dispute. These (they say) came to our seas from the sea which is called Red, and having settled in the country which they still occupy, at once began to make long voyages. 12 Inspiring Urban Image Galleries 12 Inspiring Urban Image Galleries | 500+ Pictures Jump in and take incredible visual tour of the best of WebUrbanist, from alternative forms of graffiti to amazing green designs and awe-inspiring abandoned places from around the world. Collection 1: Alternative Street Art and Graffiti 20 Light Graffiti Artists and Photographers: Light graffiti is a unique art that takes many forms, from comic and creative to refined and deliberate.

15 Interesting Women of Ancient Rome History Women in ancient Rome were not allowed any direct role in politics. Nevertheless, women often took on powerful roles behind the scenes, whether in the realm of their own family, or in the elite world of government. DHQ: Digital Humanities Quarterly: Digital Geography and Classics Changing the Center of Gravity: Transforming Classical Studies Through Cyberinfrastructure2009Volume 3 Number 1 Abstract The authors open by imagining one possible use of digital geographic techniques in the context of humanities research in 2017. They then outline the background to this vision, from early engagements in web-based mapping for the Classics to recent, fast-paced developments in web-based, collaborative geography. The article concludes with a description of their own Pleiades Project ( which gives scholars, students and enthusiasts worldwide the opportunity to use, create and share historical geographic information about the Greek and Roman World in digital form.

Zeitgeist and the Venus Project The Zeitgeist Movement has already attracted a large following, claimed to be over a half a million people so far — worldwide. Numerous Facebook groups — one with more than 70,000 people, another with more than 35,000, and still one more with almost 20,000 — transmit instructions and ideas to the activists around the globe. Various local and national groups have memberships in the thousands, using social-networking services to coordinate their campaigns and events. It is led by a man who calls himself Peter Joseph. He refuses to release his last name, citing privacy concerns about his family and friends. Regardless of his true identity, he has made certain statements that have caused great concern amongst various groups.

Hortensia (orator) - Wikipedia Little is known about the life of Hortensia aside from her career as an orator. She was the daughter of Quintus Hortensius (114 - 50 BC) apparently by his first wife Lutatia. Her father was well-known among Romans due to his moving sermons on history and law and rivalry with fellow orator Marcus Tullius Cicero.