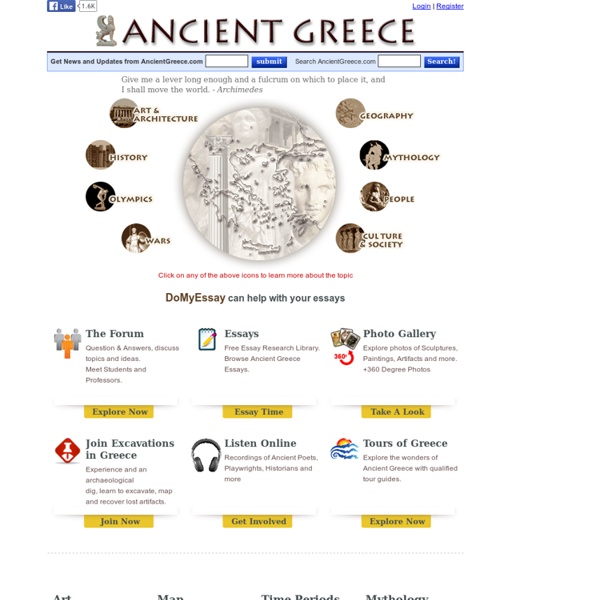 Get News and Updates from AncientGreece.com Click on any of the above icons to learn more about the topic google-site-verification: google64c94f5be7a09702.html Question & Answers, discusstopics and ideas.Meet Students and Professors. Free Essay Research Library.Browse Ancient Greece Essays. Explore photos of Sculptures, Paintings, Artifacts and more.+360 Degree Photos

10 Fascinating Facts About Slavery Facts [WARNING: Some images may disturb.] Slavery has been a part of human society since its beginning – and it continues to thrive today. This list looks at some facts about slavery that should (for the most part) be unknown to most of our readers. This is a look through history at how slavery has existed and survived through time. Judy Duchan's History of Speech - Language Pathology Overview Ancient Greece was in its heyday from around 5th century BC to 2nd century AD. That period is commonly referred to as the classical period and events in it led to major and long-lasting advances in medicine and rhetoric. Medicine in ancient Greece

Many Myths, Greek Mythology - Ancient Greece for Kids The ancient Greeks told stories about their gods. These stories are called myths (short for mythology, or stories about gods.) Stories about the ancient Greek gods are still told today. Evolution versus Creationism by Brig Klyce A modern imagination predisposed to a belief in science... will generally find that neither creation nor evolution overcomes its profound conviction of ignorance. — Jacques Barzun, 1964 (0) The big bang theory presents an interesting meeting place for modern science and established western religion. Both groups seem happy to agree that the universe originated out of nothing in an explosion at a definite time very long ago. A few scientists may go on to assert that no further explanation of the universe is necessary, because before the big bang there was no time, so there was no "before the big bang." Stephen Hawking likens the problem to "What's north of the North Pole?"

Ancient Greece [Excerpted from Greece: A Country Study. Glenn E. Curtis, ed. Ed. 4. Washington, DC: Federal Research Division of the Library of Congress, 1995] Historical Setting by Thomas W. Native American Legends (Folklore, Myths, and Traditional Indian Stories) Indigenous languages Native American cultures What's new on our site today! This page is our collection of Native American folktales and traditional stories that can be read online. We have indexed these stories tribe by tribe to make them easier to locate; however, variants on the same native legend are often told by American Indians from different tribes, especially if those tribes are kinfolk or neighbors to each other. Sponsored Links

Evolution of Humans: Developed world and Developing world « Exploring the Endeavors of Human Civilization ……. Recently a British genetics expert, Steve Jones stated that humans in developed world have stopped evolving, because people there in western countries need not struggle for there survival and the famous theory of Darvin “survival for the fittest” doesn’t come into picture. And he didn’t miss saying that the evolution hasn’t stopped in the developing world, because people there have to struggle for survival. I am no expert in the evolution theory of genetics, nor have I studied biology beyond matriculation, nor I want to challenge the British expert because I am not qualified enough, but I cant suppress something in me which tend to disagree.

Ancient Greece Ancient Greece By Teri Doleys Cedarville University History The history of Greece began with the Stone Age hunters and early farmers. Online: Yellowstone: Teacher Resources: Native American Myths Background: Archeological evidence indicates that Native American tribes lived in the Yellowstone area almost 10,000 years ago; a major trail these tribes used for tracking bison goes right through the park. Some of the tribes that traveled or lived nearby include the Shoshone, Bannock, Blackfoot, Flathead, Nez Perce, Utes, Crows, Piegans, and Paiutes. Imagine what Native Americans must have thought when they first saw the park's geysers, mudpots, and hot springs!

Forbidden Knowledge from TimeTravelResearchCenter Website Spanish version The False Front Temporal anomalies are scattered throughout the world -- things that could not possibly belong to the time period in which they were found. Classical Myth: Info: Time Line A text only version is also available. Classical Myth Homepage | Gods | Help | Time Line | Attributes