Home - The Classical Art Research Centre and The Beazley Archive 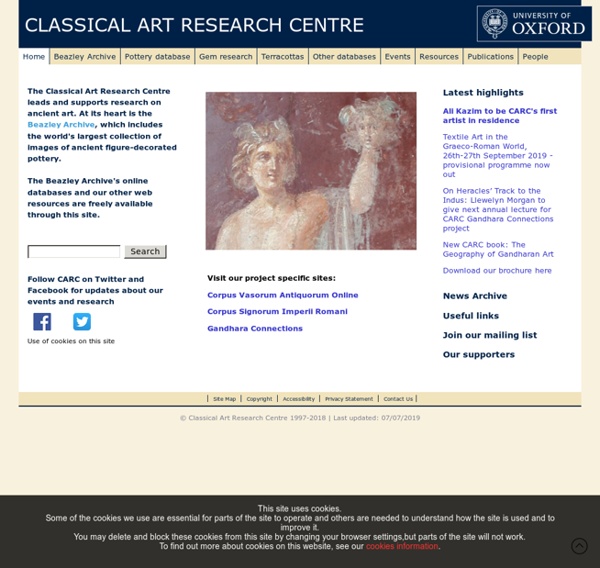 The Classical Art Research Centre leads and supports research on ancient art. At its heart is the Beazley Archive, which includes the world's largest collection of images of ancient figure-decorated pottery. The Beazley Archive's online databases and our other web resources are freely available through this site. The Classical Art Research Centre Ioannou Centre for Classical and Byzantine Studies 66 St Giles Oxford OX1 3LU Tel +44 (0)1865 278083carc@classics.ox.ac.uk Use of cookies on this site

Home - Classics - LibGuides at Credo Reference Credo LibGuides can be linked to from your institution's webpage. For LibGuides subscribers, these guides may be freely copied and modified to create or supplement your own LibGuides. Learn how to copy a LibGuide. Arachne Arachne is the central Object database of the German Archaeological Institute (DAI) and the Archaeological Institute of the University of Cologne, administrated by Reinhard Foertsch. Arachne is intended to provide archaeologists and Classicists with a free internet research tool for quickly searching hundreds of thousands of records on objects and their attributes. This combines an ongoing process of digitizing traditional documentation (stored on media which are both threatened by decay and largely unexplored) with the production of new digital object and graphic data. Wherever possible, Arachne follows a paradigm of highly structurized object-metadata which is mapped onto the CIDOC-CRM, to address machine-readable metadata strategies of the Semantic Web.

Warburg Institute digital copy antiquities Catalogue Articles You are not logged in | My saved items (0 items) | Login Give Feedback Explore Related Searches Advanced Search 35 Phenomenal Fractal Art Pictures | Inspiration Advertisement In the realm of digital art, so many wonderful and playful genres exist that stimulate the imagination, but so few do it with the intricate style of fractal art. Fractal art is achieved through the mathematical calculations of fractal objects being visually displayed, with the use of self-similar transforms that are generated and manipulated with different assigned geometric properties to produce multiple variations of the shape in continually reducing patterns.

LacusCurtius — Smith's Dictionary of Greek and Roman Antiquities LacusCurtius Educational Resource: a Selection of Articles from A 19th-Century Classical Encyclopaedia William Smith, D.C.L., LL.D.: A Dictionary of Greek and Roman Antiquities John Murray, London, 1875. This single volume, of 1294 pages in rather fine print set in two columns and amounting to well over a million words, is a treasure trove of information on the ancient world, and was for many years a standard reference work, carried thru several British and American editions from the first in 1842 to the last in 1890‑91 with relatively few alterations. It shares one of its selling points with the Web: many illustrations. They are woodcuts, but often rather good ones, and sometimes clearer than photographs could be.

Easily Take &amp; Share Screenshots With ScreenCatch Previously, we covered a Google Chrome extension that simplified the process of taking and sharing web screenshots. This time around we bring you a tool that enables sharing of screenshots not only for web pages but for any application in Windows. Presenting ScreenCatch. This utility allows you to take screenshots from within any application, crop it and upload it to the developer’s servers, where it can be publically viewed. After upload the user is provided with the web link, or can alternately save the image to their system.

Minimus Minimus is a unique Latin course for younger children. It's based on a real family who lived at Vindolanda in 100AD: Flavius, the fort commander, his wife Lepidina, their three children, assorted household slaves, their cat Vibrissa - and Minimus the mouse! salvete - exspectatissimi estis! (hello - you are very welcome) Rename, Resize, Convert &amp; Upload Images With Digito Digito is an open-source batch image processing utility offering features like renaming, resizing, format conversion and more, all with an eye-catching interface. It allows processing of images from multiple sources the result can be obtained in one centralized location. Additionally, the software also supports SMS notifications if a cellular device is attached. To begin with, you can add images using the Add Images button.

Maecenas: Images of Ancient Greece and Rome 408,330 visitors before 21 March, 2002, visitors since then Images are copyrighted, but may be used for non-commercial purposes. Click here to see the images Professor discovers hidden literary references in the Mona Lisa Queen's University Classics professor emeritus Ross Kilpatrick believes the Leonardo da Vinci masterpiece, the Mona Lisa, incorporates images inspired by the Roman poet Horace and Florentine poet Petrarch. The technique of taking a passage from literature and incorporating it into a work of art is known as 'invention' and was used by many Renaissance artists. "The composition of the Mona Lisa is striking. Why does Leonardo have an attractive woman sitting on a balcony, while in the background there is an entirely different world that is vast and barren?" says Dr.

Diotima: Women & Gender in the Ancient World Call for Collaborators to The On-line Companion to The Worlds of Roman Women The On-Line Companion to the Focus Reader, The Worlds of Roman Women, expands the book's wide representation of Latin texts by and about women dating from the earliest periods through the fourth century CE. The medium of a website, moreover, offers the opportunity to integrate visuals to texts, thus enabling users to make connections between language and material culture. The Companion has two major parts. Herodotus Timemap Book 1, Ch. 1 This is the display of the inquiry of Herodotus of Halicarnassus, so that things done by man not be forgotten in time, and that great and marvelous deeds, some displayed by the Hellenes, some by the barbarians, not lose their glory, including among others what was the cause of their waging war on each other.The Persian learned men say that the Phoenicians were the cause of the dispute. These (they say) came to our seas from the sea which is called Red, and having settled in the country which they still occupy, at once began to make long voyages. Among other places to which they carried Egyptian and Assyrian merchandise, they came to Argos,which was at that time preeminent in every way among the people of what is now called Hellas.