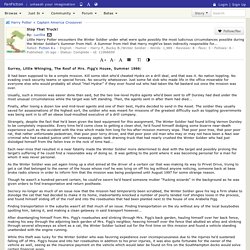 Figg's House, Summer 1986: It had been supposed to be a simple mission. Kill some idiot who'd cheated Hydra on a drill deal, and that was it. No nation toppling. No evading crack security teams or special forces. Usually, such a mission was easier done than said, but the two low-level Hydra agents who'd been sent to off Dursley had died under the most unusual circumstances while the target was left standing. Finally, after losing a dozen low and mid-level agents and one of their best, Hydra decided to send in the Asset. Strangely, despite the fact that he'd been given the best equipment for this assignment, The Winter Soldier had found killing Vernon Dursley to be completely impossible.

Each near-miss that resulted in a near fatality made the Winter Soldier more determined to deal with the target and possibly prolong the target's suffering if he could find a reasonable way of doing so. After disentangling himself from Mrs. Privet Drive: A Lily by Any Other Name Chapter 1: Prologue: Loki Learns a Lesson, a Harry Potter + Avengers Crossover fanfic. Disclaimer: I do not own the Avengers or Harry Potter. 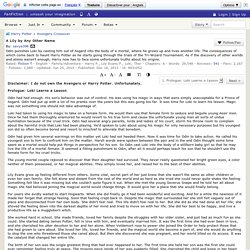 Unfortunately. Prologue: Loki Learns a Lesson Odin had had enough. His son's behavior was out of control. He was using his magic in ways that were simply unacceptable for a Prince of Asgard. Loki had taken to using his magic to take on a female form. Odin had given him several warnings on this matter yet Loki had not heeded them. The young mortal couple rejoiced to discover that their daughter had survived.

Lily Evans grew up feeling different from others. For years she avidly waited to start Hogwarts. She worked hard in school. Crossover: Loki's Secret - IBegToDreamAndDiffer - The Avengers (Marvel Movies), Harry Potter - J. K. Rowling [Archive of Our Own] A Child Avenged, a Harry Potter + Avengers Crossover fanfic. "Put on the suit, let's go a few rounds," Steve barked at Tony. 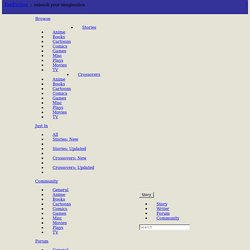 The tension in the room rose and rose until Bruce found himself drowning under a tidal wave of tension and anger, desperately wishing he could crane his neck for a breath of fresh air, away from the heat and anger that was threatening to wash him away. Then there was a crack like a gunshot and the whole world exploded. A bright light flashed and Bruce's muscles locked, his legs snapping together and his arms jerking to his sides. He fell hard onto his side and pain exploded behind his eyes. He felt the rapid thumping in his ribcage and every conscious thought running through Bruce's mind was eclipsed by his fear of the Hulk emerging and killing everything on the Helicarrier. He could feel the green monster bubbling beneath the surface, but the ripping pain of the transformation never came. At the center of the room stood a man. "None of that now," their attacker's voice cut sharply through his rage. "What…" he began to ask. Valiant, a Harry Potter + Captain America Crossover fanfic.

Valiant x When Hariel Lillian 'Harry' Potter woke up, she found herself in a cold, dark room made of some metal she'd not cared to learn the name of before that day. 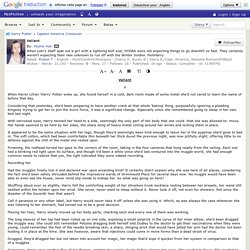 Considering that yesterday, she'd been preparing to have another crack at that whole 'baking' thing, purposefully ignoring a pleading Kingsley trying to get her to join the Auror force, it was a significant change. Especially since she remembered going to sleep in her own bed last night. With narrowed eyes, Harry twisted her head to a side, seemingly the only part of her body that she could -that she was allowed to- move. It appeared to be the same situation with her legs, though they'd seemingly been kind enough to leave her in the pyjamas she'd gone to bed in. Frowning, the redhead turned her gaze to the corners of the room, taking in the four cameras that hung neatly from the ceiling. Recording her. Had the muggles finally lost it and declared war upon wizarding kind? What did they want? 'Alohomora'.

So, a new dimension huh?