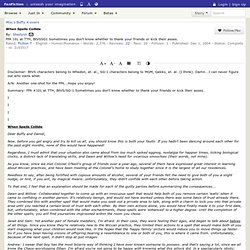 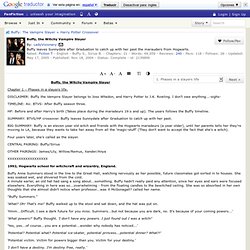 DISCLAIMER: Buffy the Vampire Slayer belongs to Joss Whedon, and Harry Potter to J.K. Rowling. The Phoenix Child by Malli Chapter 1: Prologue, a Buffy: The Vampire Slayer and Harry Potter crossover fanfic. The Phoenix Child Story by Malli Webdesign by CrystalCheyenne CrystalCheyenne's Notes: Thank you all who responded for my plea to get this story after I found out about Malli's accident. 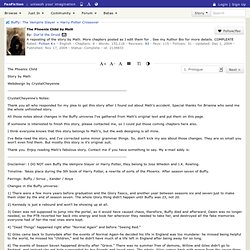 Special thanks for Brianna who send me the whole unfinished story. All those notes about changes in the Buffy universe I've gathered from Malli's original text and put them on this page. If someone is interested to finish this story, please contacted me, so I could put those coming chapters here also. I think everyone knows that this story belongs to Malli's, but the web designing is all mine. 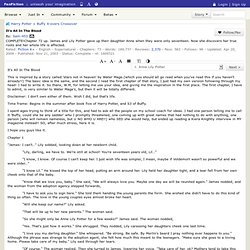 (which you should all go read when you've read this if you haven't already!!) The basic idea is the same, and the second I read the first chapter of that story, I just had my own version following through my head- I had to write it. So thanx, W.M, for letting me use your idea, and giving me the inspiration in the first place. Twins of Peace Book Two and a Half: Time Hopping Chapter 1: Default Chapter, a buffy x-overs fanfic. E-mail: Cajun_chick411@yahoo.com or Cajun_chick411@netscape.com or Spikesluv666@netscape.net Title: Twins of Peace Book Three: Time Hopping (working title) Spoilers: all four HP books, Buffy up to the end of season six, and my two fanfics Twins of Peace books one and two. 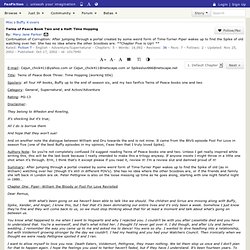 Oliver Wood in love! Chapter 1: mulholly road, a harry potter fanfic. Disclaimer : all of the caracters belongs to jk.rowling, no need to say more… There is nothing special about Mulholly Road. 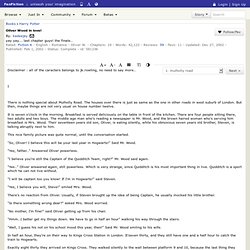 The houses over there is just as same as the one in other roads in west suburb of London. But then, maybe things are not very usual on house number twelve. It is seven o'clock in the morning. Breakfast is served deliciously on the table in front of the kitchen. This nice family picture was quite normal, until the conversation started.

Oliver Wood and the Heritage Curse In Which Oliver Discovers His Fan Club, a harry potter fanfic. Oliver Wood surveyed the Hogwarts School of Witchcraft and Wizardry quidditch field. 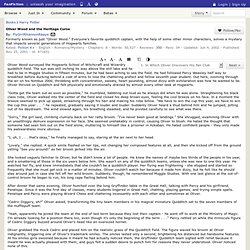 The sun was still inching its way above the still lake and he had to be in Muggle Studies in fifteen minutes, but he had been aching to see the field. He had followed Percy Weasley half way to breakfast before ducking behind a coat of arms to lose the chattering prefect and fellow seventh year student. Out here, zooming through the air on his Nimbus 2000, throbbing with concentration, sweaty, heart pounding, almost dizzy with exhilaration was how he wanted to be. Oliver thrived on Quidditch and felt physically and emotionally drained by almost every other task at Hogwarts.

"Gotta get the team out as soon as possible," he mumbled, babbling out loud as he always did when he was alone. "Sorry," the girl said, climbing clumsily back on her ratty broom. Daddy's Other Life Chapter 1: Unexpected guests, a harry potter fanfic. Elisabeth stretched and slid out from under the covers. 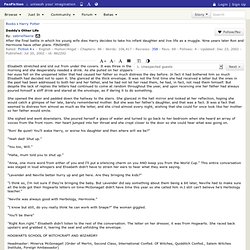 It was three in the morning and she desperately needed a drink. As she pulled on her slippers her eyes fell on the unopened letter that had caused her father so much distress the day before. In fact it had bothered him so much Elisabeth had decided not to open it. She glanced at the thick envelope. Just Another Day in Paradise: Wildest Dreams V Chapter 1: All that Jazz, a harry potter fanfic. Rose Smythe Black lifted her head slightly to see her ten year old daughter Gabrielle standing in the doorway to the kitchen, a disgusted expression on her sweet face from finding her mother and father snogging in the kitchen. 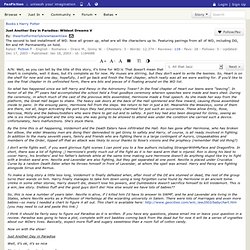 "Well, Gabby, where do you think we should do that? " Rose's husband Sirius asked while grinning at Gabrielle who was now staring into the refrigerator, her back to her parents. Love and Quidditch Chapter 1: The Question, a harry potter fanfic. A/N Um enjoy! 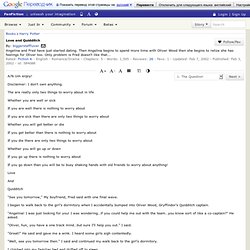 Disclaimer: I don't own anything. The are really only two things to worry about in life Whether you are well or sick If you are well there is nothing to worry about If you are sick than there are only two things to worry about Whether you will get better or die If you get better than there is nothing to worry about. The Calling Chapter 1: A Letter, a harry potter fanfic. A/N: I said I'd rewrite this fecking story, and I will. This is going to work. A Summers at Hogwarts 3: Chambers of Secrets Chapter 1: Buffy, The Dursley's, and The Malfoy's, a Buffy: The Vampire Slayer and Harry Potter crossover fanfic. NOTES: Thanks to all those who reviewed my two stories. I hope this one is as good. First off before reading this you might want to read A Summers at Hogwarts 1 and 2 first. You could probably follow this story without reading it but there are certain things that were explain in the first story that might confuse you in this one.

I'll post chapters to this list first. Yahoo .com/group/Diedandlivedtwice This is the third story in what I hope to be a series as long as people like them. This fic takes place in an Alternate Universe which means I screwed with both time lines. Of Chances, Changes, and More Chapter 1: Gryffindor, a harry potter fanfic. Of Chances, Changes and More The Great Hall was bustiling with noise on the first day of the new year at Hogwarts. Deena Parkes, a third year, sat at the long Gryffindor table, next to her good friend, a fifth year student, Oliver Wood. He was babbling on about something that Deena didn't really have a mind to pay attention to, though she guessed it was probably about Quidditch.

At the last Quidditch game of last year (which had left Deena unconcious for a day), Wood, the keeper, had been appointed team captain. Deena was the team seeker. Love Through Pain Chapter 1: Oliver gets hurt, a harry potter fanfic. Disclaimer: I don't own anyone or thing that you have heard of before. Note: This takes place around Harry's first year. I have changed some of the things that are found in the books, so please don't review trying to correct me. FictionAlley. Checkmated.