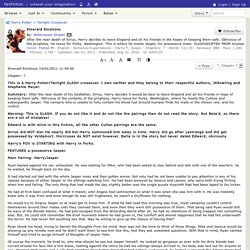 I own neither and they belong to their respectful authors, JKRowling and Stephenie Meyer. Summary: After the near death of his Godfather, Sirius, Harry decides it would be best to leave England and all his friends in hope of keeping them safe. Oblivious of the contents of the prophesy, Harry leave for Forks, Washington, where he meets the Cullens and subsequently Jasper. Warning: This is SLASH. Edward is with Alice in this fiction, all the other Cullen pairings are the same. Sirius did NOT die! Blood Pops, a Harry Potter + Twilight Crossover fanfic. Blood PopsBy: Foxwolfmoon Disclaimer: I do not own Twilight or Harry Potter. 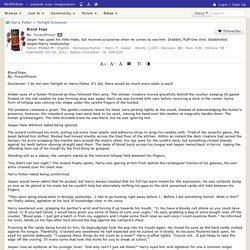 If I did, there would be much more slash in each. Amber eyes of a hunter flickered as they followed their prey. The slender creature moved gracefully behind the counter, keeping its gazed fixated on the red candies he was forming atop wax paper. Each one was formed with care before receiving a stick in the center. The predator released a growl. Jasper Hale-Whitlock hated being ignored. The wizard continued his work, pulling out some clear plastic and adhesive strips to wrap his candies with. Standing still as a statue, the vampire stared at the innocent lollipop held between his fingers. The Veela Equation by Bittersweet Alias. Blood Moon Chapter 1: Chaper One: The Vision and The Move, a Harry Potter + Twilight Crossover fanfic. Disclaimer: This story is mine but the characters are not. 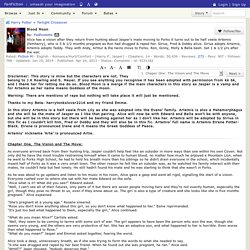 They belong to J.K Rowling and S. Meyer. If you see anything you recognise it has been adopted with permission from kk bk, and I thank her for letting me do so. Blood Moon is a merge if the main characters in this story as Jasper is a vamp and for Artemis as her name means Goddess of the moon. Warning: There are mentions of rape but nothing will take place it will just be mentioned. Thanks to my Beta: harrytonkslover2216 and my friend Emma. In this story Artemis is a half veela from Lily as she was adopted into the Evans' family. Artemis' nickname 'Arte' is pronounced Artie. Chapter One, The Vision and The Move: Reunited Love, a Harry Potter + Twilight Crossover fanfic. Pairing: Fem Harry/Jasper, Alice/Neville, George/Luna/Fred, Carlisle/Esme, Rosalie/Emmett, Edward/Bella Disclaimer: Okay I don't own Harry Potter or Twilight because they both belong to the lovely Stephanie Meyers and the awesome JK Rowling. xP Summary: Loves of the past show in the present time, though they at first believe that they could never have their mates for they seem to be together and happy. 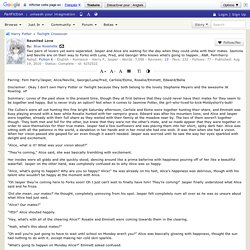 Show Chapter. Mate on Soft Paws - Miss_Poison - Harry Potter - J. K. Rowling. Ischaemia - Tsume_Yuki - Twilight Series - Stephenie Meyer. Chapter Text Sixteen They're splitting up from the Cullens for the next two weeks; while Carlisle will be arranging the paperwork for Harry and Jasper to join them in this next move, this next play at family life, Harry wants to check in on her godfather's descendants. 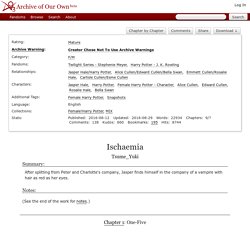 They race across the vast land of America, ducking in and out of states, eating up the distance between their previous location and their destination. Jasper's not sure how far out they are given that Harry is the one leading, but the only warning he gets is a surge in emotion, not even the time to work out just what is hitting him, before Harry tackles him to the forest floor.

Jasper goes down with a muffled bang, the sound promptly overshadowed by the thunderous crash of their bodies colliding at such high speed. Harry's playful mood is a blatant slap in the face, even as he wrestles against her to regain control of the situation. Instead, he lowers his lips to hers, swallowing back the venom that pools in his mouth. 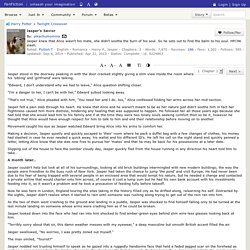 "Edward, I don't understand why we had to leave," Alice question shifting closer. "I'm a danger to her, I can't be with her," Edward sulked looking away. "That's not true," Alice pleaded with him, "You need her and I do…too," Alice confessed folding her arms across her mid-section. Jasper felt a pain stab through his heart. He knew that Alice and he weren't meant to be as her nature just didn't soothe him in fact her flightiness caused him more distress, hindering any healing that was supposed to happen.

Movement caught his eye as Jasper watched Edward bring Alice into his arms to comfort her. Making a decision, Jasper quietly and quickly escaped to 'their' room where he pack a duffel bag with a few changes of clothes, his money had stashed in case he ever needed a quick away, his wallet and his different ID's.