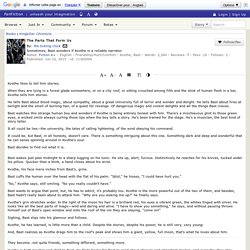 When they are lying in a forest glade somewhere, or on a city roof, or sitting crouched among filth and the stink of human flesh in a bar, Kvothe tells him stories. He tells Bast about blood magic, about sympathy, about a great University full of terror and wonder and delight. He tells Bast about fires at twilight and the smell of burning hair, of a quest for revenge.

Of dangerous magic and violent delights and all the things Bast craves. Bast watches this strange human boy and wonders if Kvothe is being entirely honest with him. It all could be lies—the university, the tales of calling lightening, of the wind obeying his command. Three Years Waterside Ch 1, Kingkiller Chronicle. Hello! 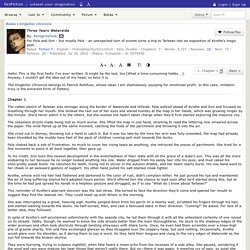 This is the first fanfic I've ever written. It might be the last, too (What a time-consuming hobby …). Anyway, I couldn't get the idea out of my head, so here it is. The Kingkiller Chronicle belongs to Patrick Rothfuss, whose ideas I am shamelessly usurping for emotional profit. In this case, imitation truly is the sincerest form of flattery. Chapter 1 The rotten stench of Tarbean was stronger along the border of Waterside and Hillside. The ceaseless drizzle made being lost so much worse. Dumb and Ditzy Ch 1, Criminal Minds. Disclaimer: I do not own Criminal Minds It started as a tickle in the back of his mind. 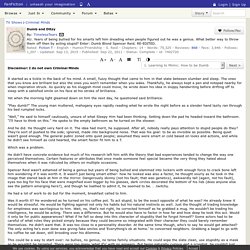 A small, fuzzy thought that came to him in that state between slumber and sleep. The ones that you know are brilliant but also the ones you won't remember when you wake. Thankfully, he always kept a pen and notepad nearby for when inspiration struck. As quickly as his sluggish mind could move, he wrote down his idea in sloppy handwriting before drifting off to sleep with a satisfied smile on his face at his stroke of brilliance.

Yet when the morning light gleamed down on him the next day, he questioned said brilliance. "Play dumb? " "Well," He said to himself cautiously, unsure of what Sleepy Him had been thinking. Echo, Criminal Minds. Summary: Reid stops talking after Tobias Henkel. 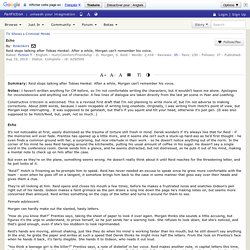 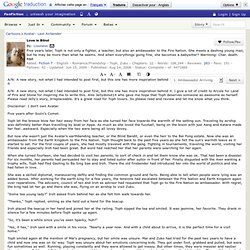 I give a lot of credit to Arcole for Land of Fire and Stone for inspiring me to write this. Also Jellydonut14 who gave me hope that Toph deserves someone as awesome as herself. Xover: The Truth is Right Here, Stargate: SG-1 & Supernatural. Warnings/Spoilers: For SPN setting is sometime, vaguely, in the later seasons, but refers to events in up to season 6. 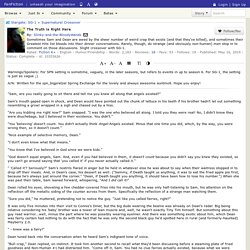 For SG-1, the setting is just as vague ;) A/N: Written for the spn_bigpretzel Spring Exchange for the lovely and always awesome auntmo9. Hope you enjoy! "Sam, are you really going to sit there and tell me you knew all along that angels existed? " Sam's mouth gaped open in shock, and Dean would have pointed out the chunk of lettuce in his teeth if his brother hadn't let out something resembling a growl wrapped in a sigh and chased out by a hiss.

"Are you kidding me right now? " Xover: Tell It to the Library, Harry Potter & Librarians, 2014. Legal Disclaimer: I own my stuff, but not the original source material. 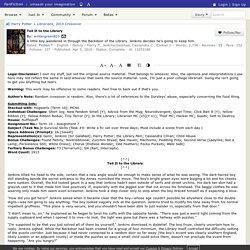 That belongs to whoever. Also, the opinions and interpretations I use here may not reflect the same in said whoever that owns the source material. Look, I'm just a poor college librarian. Suing me isn't going to get you anything but tears. Warning: This work may be offensive to some readers. Author's Note: Random crossover is random. (^^)Tell It to the Library(^^) Jenkins tilted his head to the side, certain that a new angle would be enough to make sense of what he was seeing. "How did you get here?

" "I didn't mean to, sir," he explained as he began to twist his cuffs with the opposite hands. "I'm supposed to be that you just solved all of them by yourself," Jenkins dismissed in disbelief.