Harry Potter and the Methods of Rationality Chapter 1: A Day of Very Low Probability 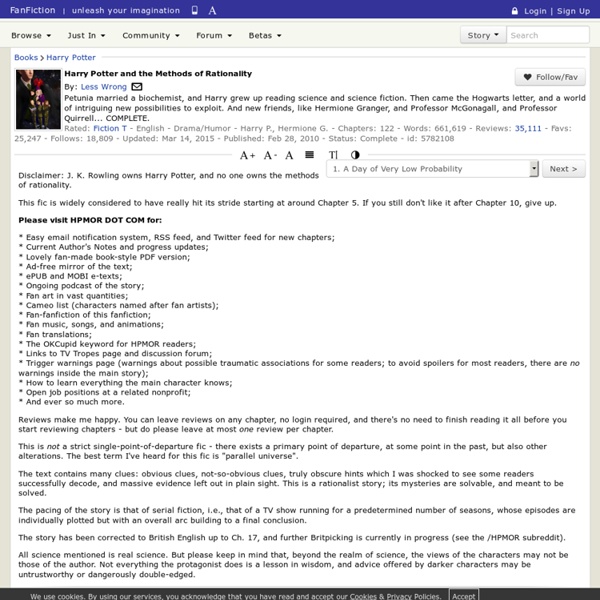 Disclaimer: J. K. Rowling owns Harry Potter, and no one owns the methods of rationality. This fic is widely considered to have really hit its stride starting at around Chapter 5. If you still don't like it after Chapter 10, give up. Please visit HPMOR DOT COM for: Reviews make me happy. This is not a strict single-point-of-departure fic - there exists a primary point of departure, at some point in the past, but also other alterations. The text contains many clues: obvious clues, not-so-obvious clues, truly obscure hints which I was shocked to see some readers successfully decode, and massive evidence left out in plain sight. The pacing of the story is that of serial fiction, i.e., that of a TV show running for a predetermined number of seasons, whose episodes are individually plotted but with an overall arc building to a final conclusion. The story has been corrected to British English up to Ch. 17, and further Britpicking is currently in progress (see the /HPMOR subreddit). "Dad! "Ah..." Related:  harry potter Fanfiction • Harry Potter epic fic • to be filed

Oh God Not Again! Chapter 1 Chapter One Disclaimer: I do not own Harry Potter. Note: Please be aware that this is a parody. I know that this may seem redundant as that is made clear as it is labeled 'parody' in the genre section at the top but some people do not look at that apparently and I have gotten quite a few reviews from people who thought it was too over-the-top to enjoy until they noticed that it was a parody. If you are one of those people then be sure to be aware of this now: THIS IS A PARODY. Also, this story had at least twenty chapters published before 'A Very Potter Musical' even came out. He'd been dreaming of it since the defeat of Voldemort. He wondered, briefly, why he was there. He counted the steps until he was standing right in front of where Sirius had fallen through. Harry awoke with a start. "Where's the cannon?" There was a crash behind them and Uncle Vernon came skidding into the room, holding a rifle. SMASH! "Couldn't make a cup o' tea, could yeh? "I demand that you leave at once, sir!"

Harry Potter and the Dark's Rise Chapter 1: Prologue, a harry potter fanfic This is a new type of story for me, I've read a lot of Dark Harry Stories, and I've found them to be excellent, so this is my attempt. I got my inspiration from a load of other stories, too many to name really, but hopefully you'll enjoy this! I want to thank my brave and valiant beta, JohnFoxton, who miraculously managed to read through the first drafts of these stories and not have a heart attack from the quality of the writing! I understand this story has been done before, hell I've read enough of them, but I really think I have managed to steer clear of most of the cliché's, or at least approach them in a novel manner. The prologue is set 14 years after chapter 1. Prologue: A Fresh Start. The rain was lashing against the windows of Harry's office on September 2nd. He looked back down at the parchment, Babcock: short boy with black hair, Wilson: Pale girl brown hair. He picked up his lesson plan and the register before stepping out from behind his desk. "Professor Potter, Sir?"

Finding a Place to Call Home Chapter 1, a harry potter fanfic Finding a Place to Call Home Moon: Hello, I'm back in the name of alternate pairings and new stories! Welcome to Finding a Place to Call Home, my second HarryxAstoria fic if you count Trouble (which was my first and possibly only harem). I've modified several parts of the story to keep from hitting cliches and common happenstances to make a more original story. I hope you like it! Chapter 1: Wild Child "All the lies and pain you put me through, and now I know its not me its you." Harry wondered what prompted him to snap at Astoria Greengrass. His last few weeks – ever since his name had come out of the Goblet of Fire – had been stressful and extremely unhappy. He was looking forward to just sitting back and learning new things. Of course, then he had gone to the Quidditch World Cup. He got to Hogwarts, and with the buzz of the Tri-Wizard Tournament and the arrival of two other schools, Harry could almost forget about the disastrous end of the World Cup. Now, obviously, he should have.

293 ಠ_ಠ Look of Disapproval About ಠ_ಠ, otherwise known as the “look of disapproval,” is a character sequence commonly used as a reaction emoticon to express one’s disapproval or disbelief. Origin The unicode character “ಠ” comes from the letter “ṭha” in Kannada, one of the major Dravidian languages of India that is influenced by Sanskrit. Spread The earliest known mention of “ಠ__ಠ” on 4chan can be found in an /b/ thread titled “epic fail guy gravity” archived on May 31st, 2007. The first Urban Dictionary entry was created on July 13th, 2008, which describes the emoticon as “a silly little face.” The Wikitionary entry for “ಠ__ಠ” was first submitted on July 25th, 2009, which describes the emoticon as being “created on the same principle as o_O, but using a Unicode character which more closely resembles an eye with an eyebrow.” Usage The emoticon is most commonly used to express disapproval or disappointment, in similar vein to other expressions and reaction faces like “are you fucking serious?” Variations Image Macros

Harry Potter and the Nightmares of Futures Past Chapter 1: Prologue The End of Days Disclaimer – The world of Harry Potter is owned by JK Rowling and various publishers. I make no claim to ownership; I'm just playing in her sandbox whilst I get these story ideas out of my head. Bloody muse won't leave me alone. Harry Potter and the Nightmares of Futures Past - Chapter 1 Harry Potter, thirty years old and the last surviving member of the Order of the Phoenix, blinked his eyes rapidly, trying to restore his vision. Gobbets of flesh, drops of blood, bits of gravel rained down, but the deluge eventually trailed off. Whatever bit of Godric he left of himself in the sword is probably happier now. "I suppose it's my turn now," Harry said aloud. Harry appeared in the ruined Great Hall. Still the patter of droplets on stone was soothing in its own way. The gaunt man in his tattered and blood-stained robes sank to his knees on the wet stone floor. Harry awoke cold, wet, and shivering. He cut that thought off. Harry took in a deep breath and let it out. "Harry?" "Harry?" "Harry?

The Brightest Star Chapter 1: Prologue, a harry potter fanfic I do not own Harry Potter, and I do not make any money from this story. Everything belongs to J. K. This story will be the Harry Potter series told from the perspective of the House of Black (and Malfoy). Additionally, this is the follow-on from my previous story 'As Black As Night'. Either way, I hope you enjoy the story... Prologue Sirius Of course they were waiting for him. He should have known. They would take him, and Kiss him, and this would be the closest to freedom her ever got. He closed his eyes. At least he could remember them. Narcissa The dark figures were illuminated against the moonlight and the bright sparks of wand fire. She heard the roar of the beast. The scream of the child. The sobs of those in her tower with her. But she had not the eyes for them. She had only eyes for him. And she prayed for the Gods to bring him back at the end of the night. Cassiopeia She watched as the rat-like filth struck her Heir, watched as she was flung back, watched as she hit the ground with a thud.

The Great Escape, a harry potter fanfic The Great Escape Disclaimer: I do not own Harry Potter, Hermione Granger or any part of the Wizarding World. They belong to J.K. Rowling, who has kindly consented to let us poor souls muck about in that great world she created. Harry Potter, a 14 year old wizard who was also known to the general Wizarding public as the Boy-Who-Lived, sat at the Gryffindor table, staring despondently at his breakfast trying his best to ignore the mutterings and stares that were being directed at him. Only last night, Halloween, the contenders for the newly revived Triwizard tournament had been chosen. The reason this affected him was because apart from the three regular champions, one for each school, one other name had emerged from the Goblet of Fire. This Halloween too, like the previous ones at Hogwarts, something had gone horribly wrong for Harry again. They had also neglected to inform the student body the reasons for him having to compete. "Oh thank God I found you. "Thank you Hermione. "Enchanting.

Wondermark Top 48 ads that would never be allowed today » Article » OWNI.eu, Digital Journalism Would the nostalgics and apologists of the “good old days” still hold the same views after viewing these vintage ads? This list may clash with the upscale world of Mad Men … but is far removed from our times? This article originally appeared on Topito Related article: Honest Logos – If Brands Told the Truth View more In Pictures sets on Owni.eu