Getting Too Old For This Chapter 1, a Harry Potter + Mass Effect Crossover fanfic. Akuze - 08.19.2177 An injured, broken, and tired man sits on a massive tire at the edge of a settlement. 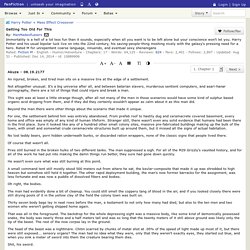 Not altogether unusual. It's a big universe after all, and between batarian slavers, murderous sentient computers, and asari-hanar pornography, there are a lot of things that could injure and break a man. This sight was at least a little strange though, after all not many of the men in those scenarios would have some kind of sulphur based organic acid dripping from them, and if they did they certainly wouldn't appear as calm about it as this man did. Beyond the man there were other things about the scenario that made it unique. For one, the settlement behind him was entirely abandoned. No lost teddy bears, porn hidden underneath bunks, or discarded ration wrappers, none of the classic signs that people lived there. Of course that wasn't all. Fires still burned in the broken hulks of two different tanks.

He wasn't even sure what was still burning at this point. Ascension CH 1- It Could Only Get Worse, a Harry Potter + Mass Effect Crossover fanfic. AN: I regretfully do not own Harry Potter or Mass Effect. 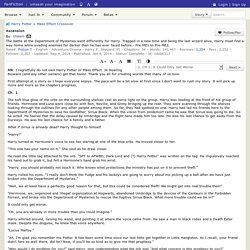 JK Rowling Bioware (and any other owners) get that honor. Thank you all for creating worlds that many of us love. First attempt at a story so I hope everyone enjoys. The pace will be a bit slow at first since I don't want to rush my story. It will pick up more and more as the chapters progress. The effects of magic Chapter 1, a Harry Potter + Mass Effect Crossover fanfic.

Disclaimer: this is a work of fiction. 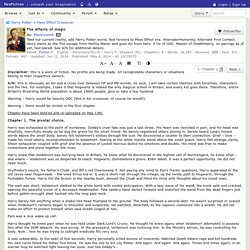 No profits are being made. All recognizable characters or situations belong to their respective owners. A/N: this is obviously an AU and a cross-over between HP and ME worlds. As such, I will take certain liberties with timelines, characters and the like. For example, I take it that Hogwarts is indeed the only magical school in Britain, and every kid goes there.

Warning – Harry would be heavily OOC (this is AU crossover, of course he would!). Warning – there would be clichés in the first chapter. Chapter have been beta'ed and re-uploaded on May 13th. The Green Eyed Spectre Chapter 1: Eden Prime, a Harry Potter + Mass Effect Crossover fanfic. Disclaimer: Neither Harry Potter nor Mass Effect nor their affiliated bits and pieces are my property. 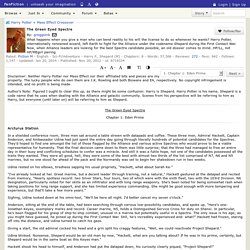 The lucky people who do own them are J.K. Rowling and both Bioware and EA, respectively. No copyright infringement is intended, and no profit is being made. Author's Note: Figured I ought to clear this up, as there might be some confusion: Harry is Shepard. Harry Potter is his name, Shepard is a code name that he uses when dealing with the Alliance and galactic community. The Green Eyed Spectre Chapter 1: Eden Prime Arcturus Station. A Wizard's Displacement Chapter 1, a Harry Potter + Mass Effect Crossover fanfic. Summary: Harry believes that his life was not at all pleasant. 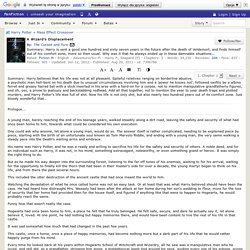 Spiteful relatives ranging on borderline abusive, a psychotic man hell-bent on his death due to unusual circumstances involving him and a 'power he knows not', followed swiftly be a albino ferret and greasy haired bat with a stick inserted in his arse with a hard-on for a corpse, not to mention manipulative grandfatherly figures, and oh, yes, a prone to jealousy and backstabbing redhead. Add all that together, not to mention the year to year death traps and plotted murders, and Harry Potter's life was full of shit. Now his life is not only shit, but also nearly two hundred years out of its comfort zone.

Just bloody wonderful that… Prologue... A young man, barely reaching the end of his teenage years, walked steadily along a dirt road, leaving the safety and security of what had once been home to him, towards what could be considered his own execution. Ave Gaia Chapter 1: Military Preparations, a Harry Potter + Mass Effect Crossover fanfic. Disclaimer: I do not own the rights to the Harry Potter universe or the Mass Effect franchise. 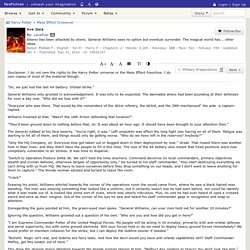 I do own copies of most of the material though. "Sir, we just lost the last AA battery. Orbital strike. " General Williams only grunted in acknowledgement. It was only to be expected. For the Greater Good Chapter 1, a Harry Potter + Mass Effect Crossover fanfic. Author's Notes: Mass Effect/Harry Potter Crossover. 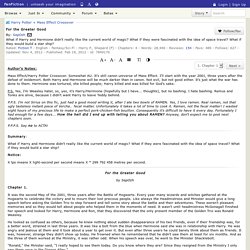 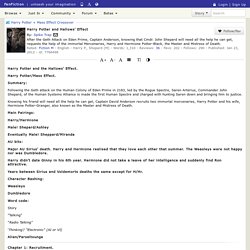 Harry Potter/Mass Effect. Summary: Following the Geth attack on the Human Colony of Eden Prime in 2183, led by the Rogue Spectre, Saren Arterius, Commander John Shepard, of the Human Systems Alliance is made the first Human Spectre and charged with hunting Saren down and bringing him to justice. Knowing his friend will need all the help he can get, Captain David Anderson recruits two immortal mercenaries, Harry Potter and his wife, Hermione Potter-Granger, also known as the Master and Mistress of Death. Main Pairings: Harry/Hermione Male! Eventually Male! Reaping Destiny Chapter 1: Prologue - Death Comes Calling, a Harry Potter + Mass Effect Crossover fanfic.

I've had an idea for a HP/ME crossover for quite some time now. 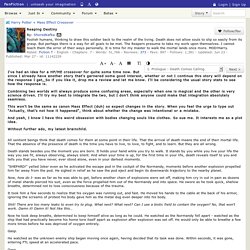 But since I already have another story that's garnered some good interest, whether or not I continue this story will depend on the response I get. So if you like it, drop me a review and let me know. I'll be considering the usual story stats to see how the response is. Combining two worlds will always produce some confusing areas, especially when one is magical and the other is very science driven. I'll try my best to integrate the two, but I don't think anyone could make that integration absolutely seamless. This won't be the same as canon Mass Effect (duh) so expect changes in the story. The Harbinger Of Change Chapter 1: Prologue, a Harry Potter + Mass Effect Crossover fanfic. AN: I do not own Harry Potter, Mass Effect or any other franchises such as Halo from which I might have taken some ideas. 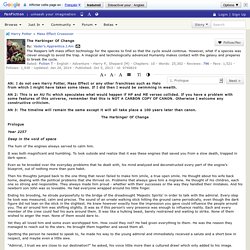 If I did then I would be swimming in wealth. AN 2: This is an AU fic which speculates what would happen if HP and ME verses collided. If you have a problem with some features of this universe, remember that this is NOT A CARBON COPY OF CANON. Otherwise I welcome any constructive criticism. AN 3: The timeline will remain the same except it will all take place a 100 years later than canon. The Harbinger Of Change Prologue Year 2257 Deep in the void of space The hum of the engines always served to calm him.