Rebirth. Rating: T, but it might eventually be changed to M Pairing: HP/TR Disclaimer: I am not J K Rowling and I do not own Harry Potter. 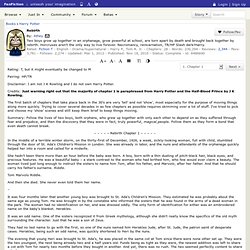 Credits: Just warning right out that the majority of chapter 1 is paraphrased from Harry Potter and the Half-Blood Prince by J K Rowling. The first batch of chapters that take place back in the 30's are very 'tell' and not 'show', most especially for the purpose of moving things along more quickly. Trying to cover several decades in as few chapters as possible requires skimming over a lot of stuff. Summary: Follow the lives of two boys, both orphans, who grew up together with only each other to depend on as they suffered through fear and prejudice, and then the discovery that they were in fact, truly powerful, magical,people. 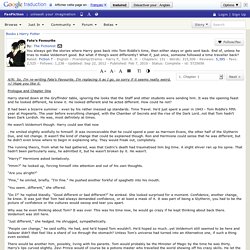 I'm replacing it as I go, so sorry if it seems really weird. =/ Hope you like it. Prologue and Chapter One Harry stared down at the Gryffindor table, ignoring the looks that the Staff and other students were sending him. It was the opening feast and he looked different, he knew it. He looked different and he acted different. It had been a bizarre summer - even by his rather messed up standards. The New Life. Hellu~ I've come up with a new story! 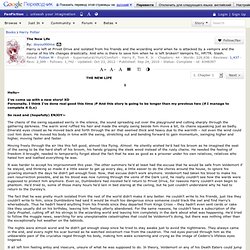 XDPersonally, I think I've done real good this time ;P And this story is going to be longer than my previous two (if I manage to complete it O,o) So read and (hopefully) ENJOY~ The chains of the swing squeaked eerily in the silence, the sound spreading out over the playground and cutting sharply through the gathering darkness. The warm wind ruffled his hair and made the empty swing beside him move a bit, its chains squeaking just as badly. Moving freely through the air like this felt good, almost like flying. It was harder to accept his imprisonment this year. The fact that he was pretty much isolated from the rest of the world didn't make it any better. The nights were almost worst and he didn't get enough sleep since he tried to stay awake just to avoid the nightmares. It all left him feeling antsy and insecure, unsure of what he was supposed to do. Liquida Tenebris. Paved with good intentions. 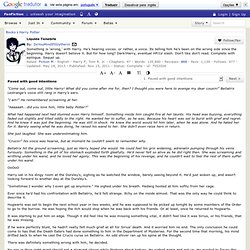 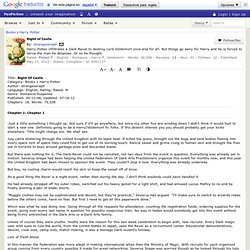 Not sure if it'll go anywhere, but since my other fics are winding down I didn't think it would hurt to start a new one. Definitely going to be a Harry/Voldemort fic folks. If this doesn't interest you you should probably get your kicks elsewhere. July came blistering through the United Kingdom with its tepid heat. But there was nothing for it. But boy, no cooling charm would reach his skin or keep the sweat off of brow. Its a good thing the Revel is a night event, rather than during the day.

He had already stripped off his outer robes, switched out his heavy jacket for a light shirt, and had amused Lucius Malfoy to no end by finally donning a pair of khaki shorts. Which was what he was doing now. Unless of course they were youths. Losing Touch. Disclaimer: I'm obviously not making any money off this, so what makes you think I own Harry Potter? 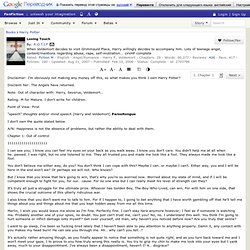 Disclaim her: The Angels have returned. Note: Out of character with: Harry, Severus, Voldemort… Rating: M for Mature. Things I Love In This World. The Dark Child. Summary: Harry grew up inside of a Orphanage, and became quite the little Bookworm. 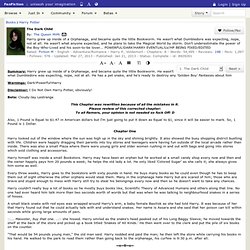 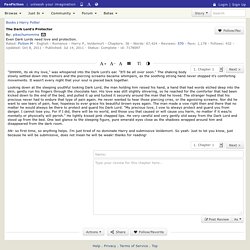 "It'll be all over soon. " The shaking body slowly settled down into tremors and the piercing screams became whimpers, as the soothing strong hand never stopped it's comforting movements. It wasn't every night that your soul is pieced back together. Looking down at the sleeping youthful looking Dark Lord, the man holding him raised his hand, a hand that had words etched deep into the skin, gently run his fingers through the chocolate hair. His love was still slightly shivering, so he reached for the comforter that had been kicked down to the end of the bed, and pulled it up and tucked it securely around the man that he loved. 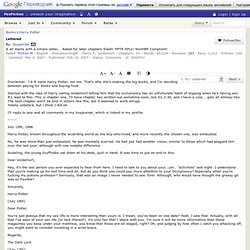 That's why she's making the big bucks, and I'm deciding between paying for books and buying food. Started with the idea of Harry owling Voldemort telling him that his occlumency has an unfortunate habit of slipping when he's having sex. It's lead to this. This is chapter one, I'll have chapter two written out sometime soon, but it's 2:30, and I have a cold... gets all whiney-likeThe next chapter won't be told in letters like this, but it seemed to work shrugsTotally unbeta'd, but I think I did ok. I'll reply to any and all comments in my livejournal, which is linked in my profile. July 15th, 1996 Harry Potter, known throughout the wizarding world as the boy-who-lived, and more recently the chosen one, was exhausted. Indelible. Ok, first off, I know I said I was waiting until BLACK COMPLICATION was finished before starting a new fiction, but obviously I'm not. 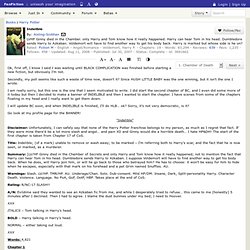 Secondly, my poll seems like such a waste of time now, doesn't it? Since HUSH LITTLE BABY was the one winning, but it isn't the one I wrote. I am really sorry, but this one is the one that I seem motivated to write. I did start the second chapter of BC, and I even did some more of it today but then I decided to make a banner of INDELIBLE and then I wanted to start the chapter.

I have scenes from some of the chapters floating in my head and I really want to get them down. Dabbling With The Dark. Summary: How does Harry react when he finds out the truth behind all of Dumbledore's secrets from Voldemort? Simple... he plots to kill them both. Warnings: SLASH - Harry Potter/Lord Voldemort Also to those who live where it's illegal: Harry is only 16 in this story. Disclaimer: The characters in this story do not belong to me. They are the property of J.K. Author Note: This story is completely written and will be posted by chapters. " regular speech " Italics is telepathic talking between Harry & Voldemort Bold is Parseltongue Prologue Standing in his bedroom at the Dursleys angry beyond belief, Harry crumbles up the letter from Dumbledore in his hand before throwing it clear across the room where it splats on the window before dropping to the ground. Sirius. He squeezes his eyes shut tighter under his hands digging the heels of his hand harder into his eyes.

And finally, my proof that Severus is the traitor I have believed he is for so long. New Divide. Ok. I know I'm on my Easter holidays, and I know I promised to update, but it's about time I admitted to myself (and to you all) that I WILL NOT be able to update as frequently as I had hoped to. I have started the next chapter of Butterfly, but I'm getting nowhere fast with it. Sorry. I have A MONTH left before my exams, and that isn't including the THREE WEEKS OF exams that I have to look forward to.

So, while I will try and update at least once during that time, I probably won't. What I propose to do is this. BANNER in profile… Thank you very, very much to Star_Faerie and to Araea Swiftwind for their much appreciated beta'ing skills. Paraselenic. A Snake Named Voldemort. Chapter 1: Chapter 1 Summary: After being turned into a snake by Snape and Dumbledore and unable to change back, Lord Voldemort has no choice but to turn to the only other living Parselmouth, Harry Potter. After making a deal with each other, Harry agrees to help the Dark Lord return to his human form. Forced to work together, how will Harry deal with having Voldemort live around his neck?

Rating: M for language and slash.