The Dragon of Moria, a Harry Potter + Lord of the Rings Crossover fanfic. A/N: This is really dumb. 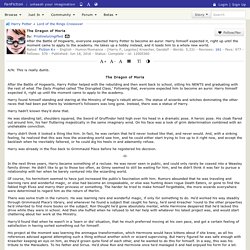 The Dragon of Moria After the Battle of Hogwarts, Harry Potter helped with the rebuilding and then went back to school, sitting his NEWTS and graduating with the rest of what The Daily Prophet called 'The Disrupted Class.' Following that, everyone expected him to become an auror. Harry himself expected it, right up until the moment came to apply to the academy. For Fallen Souls Chapter 1: Part I-I: Orestes, a Harry Potter + Lord of the Rings Crossover fanfic. AN: After almost two years, I finally managed to pull myself together and write something. 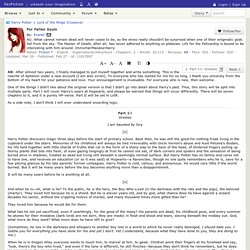 This is the rewrite of Aphelion under a new account (I am also svren). To everyone who has waited for me for so long, I thank you sincerely from the bottom of my heart for your patience and love. Your encouragement is invaluable. For everyone who is new, then welcome. Incendio Chapter 1: Prologue: Of Fire and Rage, a Harry Potter + Hobbit Crossover fanfic. Disclaimer: I think it goes without saying that I do not own the Hobbit or Harry Potter. 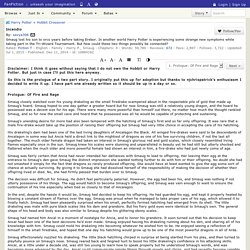 But just in case I'll put this here anyway. So this is the prologue of a two part story. I originally put this up for adoption but thanks to njchrispatrick's enthusiasm I decided to write it up. I have part one already written so it should be up in a day or so. Prologue: Of Fire and Rage Smaug closely watched over his young drakeling as the small firedrake scampered about in the respectable pile of gold that made up Smaug's hoard. Smaug's unending desire for more had also been tempered with the hatching of Smaug's first and so far only offspring. His drakeling's dam had been one of the last living daughters of Ancalagon the Black. Smaug was fairly certain that Ancia had never intended her dalliances with Smaug to lead to offspring. Draco Dormiens Nunquam Titillandus, a harry potter fanfic. (minor rephrasing of sections, March, 2013) Disclaimer: I am not J K Rowling. 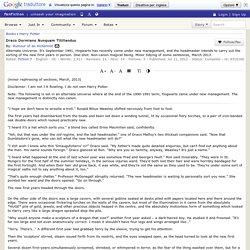 I do not own Harry Potter. Note: The following is set in an alternate universe where at the end of the 1990-1991 term, Hogwarts came under new management. The new management is distinctly non-canon. "I hope we don't have to wrestle a troll. " The first years had disembarked from the boats and been led down a winding tunnel, lit by occasional fiery torches, to a pair of iron-banded oak double-doors which looked practically new. "I heard it's a hat which sorts you. " a blond boy called Ernie Macmillan said, confidently. "Yeh, but that was under the old regime, and the last headmaster. 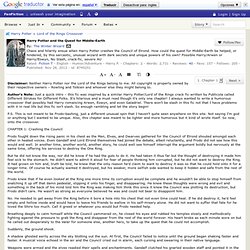 All copyright is properly owned by their respective owners – Rowling and Tolkien and whoever else they might belong to. Author's Note: Just a quick intro – this fic was inspired by a similar Harry Potter/Lord of the Rings crack fic written by Publicola called Different Strokes for Different Folks. It's hilarious and a must read though it's only one chapter! I always wanted to write a humorous crossover that possibly had Harry romancing Arwen, Eowyn, and even Galadriel. There won't be slash in this fic not that I have problems with it in real life but this fic isn't slash. Not Quite A Maia Chapter 1: Absent Without Official Leave, a harry potter fanfic. Disclaimer: Harry Potter is owned by J.K Rowling, etc. and Lord of the Rings and The Silmarillion are owned by J.R.R. 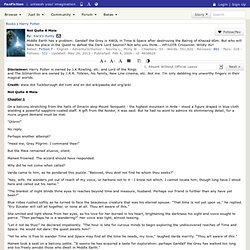 Tolkien, his family, New Line cinema, etc. Not me. I'm only dabbling my unworthy fingers in their magical worlds. Credit: www dot Tuckborough dot com and en dot wikipaedia dot org/wiki. Well, let's make this quick then! Chapter 1, a Harry Potter + Lord of the Rings Crossover fanfic. The day after the final battle Harry retrieved the stone, it simply wasn't safe to leave it lying on the forest floor. 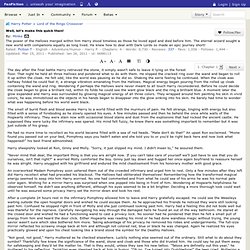 That night he held all three Hallows and pondered what to do with them. He slipped the cracked ring over the wand and began to roll it up within the cloak. He felt odd, like the world was pausing as he did so. Different Strokes for Different Folks, a Harry Potter + Lord of the Rings Crossover fanfic. Disclaimer: This one-shot contains content from the film script for "The Lord of the Rings: The Fellowship of the Rings. 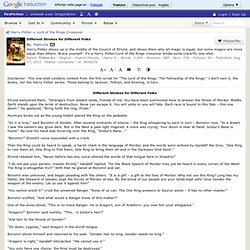 " I don't own it, the books, nor the Harry Potter series. Those belong to Jackson, Tolkien, and Rowling, in turn. Different Strokes for Different Folks Elrond welcomed them, "Strangers from distant lands, friends of old. Story Beginnings and Ideas Chapter 1: Searching for Peace, a Harry Potter + Lord of the Rings Crossover fanfic. Name: Searching for Peace Pairings: either Harry/Glorfindel or Harry/Haldir or Harry/Legolas Summary: Harry has enough from the stressful life and decides to travel to another world. 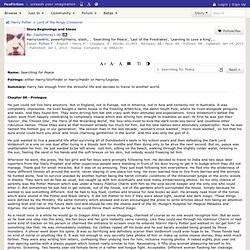 Chapter 00 - Prologue He just could not live here anymore. Not in England, not in Europe, not in America, not in Asia and certainly not in Australia. He just wanted to live a peaceful life after surviving all of Dumbledore's tests in his school years and then defeating the Dark Lord Voldemort in a one on one duel after living in a bloody tent for months and then dying only to be alive the next second. Wherever he went, the press, the fan girls and fan boys were promptly following him. As a result once in a while he would go to Diagon Alley for some shopping, charmed of course so no one would recognize him.

Why could not his life be normal? After this encounter he started his magical schooling at Hogwarts School of Witchcraft and Wizardry. Second year began like the fist. Sixth year was rather calm. A Whole New World Chapter 1: Arriving, a Harry Potter + Lord of the Rings Crossover fanfic. Disclaimer: Tolkien and Rowling own these characters, yada, yada... you guys know the drill. 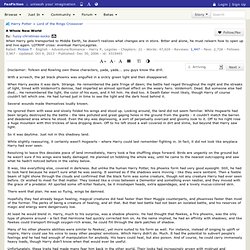 With a screech, the jet black phoenix was engulfed in a sickly green light and then disappeared.