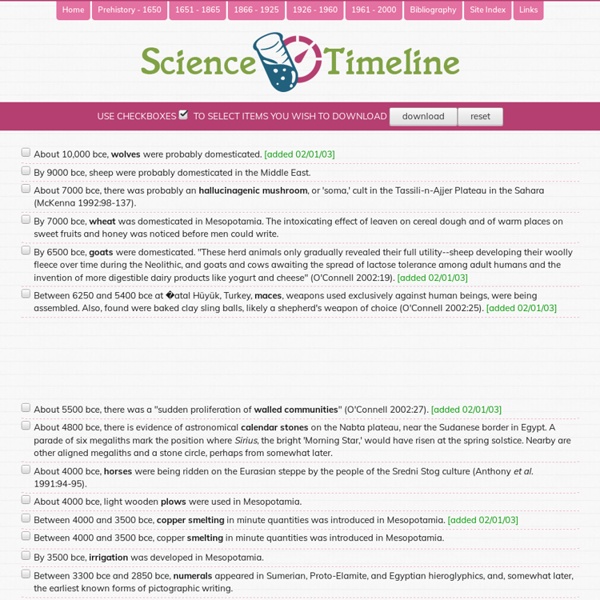 Related:  science and beyond • Timeline • Knowlage

Solar Roads Could Power An Entire Country A small US-based company called Solar Roadways are developing a solar road surface that, if installed nationwide, has the potential to produce more renewable energy than the entire country uses. In fact, they’ve actually already developed a working prototype that’s been installed in a parking lot, and they’re now crowdsourcing funds in order to tweak the design and move towards production. Solar Roadways, which was started by Scott and Julie Brusaw in 2006, designed and developed hexagonal glass solar panels studded with LED lights that could be installed on a variety of surfaces such as roads, pavements and playgrounds. The Human Journey: Migration Routes When humans first ventured out of Africa some 60,000 years ago, they left genetic footprints still visible today. By mapping the appearance and frequency of genetic markers in modern peoples, we create a picture of when and where ancient humans moved around the world. These great migrations eventually led the descendants of a small group of Africans to occupy even the farthest reaches of the Earth. Our species is an African one: Africa is where we first evolved, and where we have spent the majority of our time on Earth. The earliest fossils of recognizably modern Homo sapiens appear in the fossil record at Omo Kibish in Ethiopia, around 200,000 years ago. Although earlier fossils may be found over the coming years, this is our best understanding of when and approximately where we originated.

Science Proves That Human Consciousness and Our Material World Are Intertwined: See For Yourself Nikola Tesla said it best, “the day science begins to study non-physical phenomena, it will make more progress in one decade than in all the previous centuries of its existence. To understand the true nature of the universe, one must think it terms of energy, frequency and vibration.” Swami Vivekananda influenced Tesla’s work, an Indian Hindu monk and chief disciple of the 19th century saint Ramakrishna.

The Spice That Prevents Fluoride From Destroying Your Brain Fluoride is found everywhere today, from antibiotics to drinking water, no stick pans to toothpaste, making exposure inevitable. All the more reason why new research proving this common spice can prevent fluoride damage is so promising! Fluoride’s neurotoxicity has been the subject of academic debate for decades, and now a matter of increasingly impassioned controversy among the general public, as well. From ‘conspiracy theories’ about it being first used in drinking water in Russian and Nazi concentration camps to chemically lobotomize captives, to its now well-known IQ lowering properties, to its ability to enhance the calcification of the pineal gland – the traditional ‘seat of the soul’ – many around the world, and increasingly in the heavily fluoridated regions of the United States, are starting to organize at the local and statewide level to oust this ubiquitous toxicant from municipal drinking water. The study concluded, Discussion

Radical Behaviourism and Society Here is yet another entry for the Rational Skepticism Science Writing Contest. Please give it a read and, if you like it, vote for it! Also, I may have failed to mention, the general topic the essays must address is “What area of scientific research do you think will prove to be the most important by the end of this century, and why?” By Mr. Samsa B. Kirlian Energy Fields Radiation Fields - Energy Fields - Reflected Zones The human energy field is thought to contain information that relates to all the activity going on within and around the person. The human aura or light body is invisible because our eyes only respond to a band of wavelengths called the visible spectrum and as the aura lies outside of this most people are unable to see it with the naked eye. However throughout history many seers and sensitive’s have claimed to see this aura surrounding people.

The Origin of Humans Is Surprisingly Complicated HUMAN FAMILY TREE used to be a scraggly thing. With relatively few fossils to work from, scientists' best guess was that they could all be assigned to just two lineages, one of which went extinct and the other of which ultimately gave rise to us. Discoveries made over the past few decades have revealed a far more luxuriant tree, however—one abounding with branches and twigs that eventually petered out. Umberto Eco’s Antilibrary: Why Unread Books Are More Valuable to Our Lives than Read Ones by Maria Popova How to become an “antischolar” in a culture that treats knowledge as “an ornament that allows us to rise in the pecking order.” “It is our knowledge — the things we are sure of — that makes the world go wrong and keeps us from seeing and learning,” Lincoln Steffens wrote in his beautiful 1925 essay. Piercingly true as this may be, we’ve known at least since Plato’s famous Allegory of the Cave that “most people are not just comfortable in their ignorance, but hostile to anyone who points it out.”. Although science is driven by “thoroughly conscious ignorance” and the spiritual path paved with admonitions against the illusion of thorough understanding, we cling to our knowledge — our incomplete, imperfect, infinitesimal-in-absolute-terms knowledge — like we cling to life itself.

Data Storage in Crystal Quartz will change Everything! You know how much I LOVE talking about new technology, right? Well, this is one that is going to blow your mind, make an excellent case for the Crystal Movement, and also mop the floor with “limited data storage” forever! There’s a new kind of storage device which many tech companies have been diving into in secret for the past few years, which Hitachi recently came out with a technology they are developing which is essentially a sheet of Quartz Glass, which could potentially save data up to 300 Million Years! If you didn’t know anything about storage devices that we currently have, but anything from records, CD’s, USB sticks, magnetic tape, none of these can even lay a finger on this new, very impressive technology. "The prototype is made of a square of quartz two centimeters wide and two millimeters thick.

This Breathtaking Video Reveals How Humanity Took Over The World The Black Death. The Second World War. The Industrial Revolution.