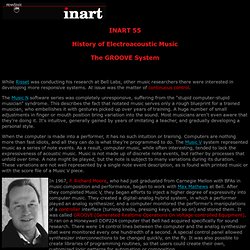 At issue was the matter of continuous control. The Music N software series was completely unresponsive, suffering from the "stupid computer-stupid musician" syndrome. This describes the fact that notated music serves only a rough blueprint for a trained musician, who embellishes it with gestures picked up over years of training. A huge number of small adjustments in finger or mouth position bring variation into the sound. Most musicians aren't even aware that they're doing it. When the computer is made into a performer, it has no such intuition or training. In 1967, F. Composer Emmanuel Ghent (1925-2003) began work at Bell Labs in 1967. In 1973 Laurie Spiegel joined Bell Labs to work with the system.

In 1976 Mathews, in pursuit in what he called the "Intelligent Machine," used GROOVE to create a program called Conductor. F. History of MIDI. The creation of MIDI in 1983 is closely tied to the development of music synthesizers, but it has spawned whole industries of interactivity far beyond the dreams of 1983. 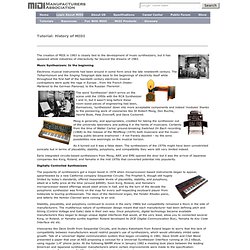 Music Synthesizers: In the beginning Electronic musical instruments had been around in some form since the late nineteenth century. The Telharmonium and the Singing Telegraph date back to the beginnings of electricity itself while throughout the first half of the twentieth century electronic musical contraptions were quite the rage in Europe , from the French Ondes-Martenot to the German Pianorad, to the Russian Theremin . The word ‘Synthesizer' didn't arrive on the scene until the 1950s with the RCA Synthesizer I and II, but it wasn't long before these room-sized pieces of engineering had been, themselves, ‘synthesized' down into more acceptable components and indeed ‘modules' thanks to the pioneering work of visionaries like Dr Robert Moog, Don Buchla, Haorld Bode, Pete Zinovieff, and Dave Cockerell.

MIDI is Born. MIDI. INART 55 From Microprocessors to MIDI. In the 1980s, the creation of the microprocessor made digital technology increasingly pervasive. 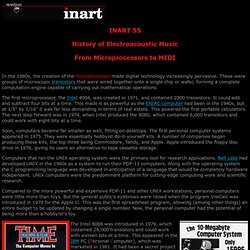 These were groups of microscopic transistors that were wired together onto a single chip or wafer, forming a complete computation engine capable of carrying out mathematical operations. The first microprocessor, the Intel 4004, was created in 1971, and contained 2300 transistors. It could add and subtract four bits at a time. World's First Stereo Recording June 1 1934. Jean-Claude Risset. Jean-Claude Risset (18 March 1938, in Le Puy-en-Velay, France) is a French composer, best known for his pioneering contributions to computer music. 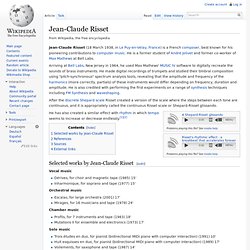 He is a former student of André Jolivet and former co-worker of Max Mathews at Bell Labs. Arriving at Bell Labs, New Jersey in 1964, he used Max Mathews' MUSIC IV software to digitally recreate the sounds of brass instruments. He made digital recordings of trumpets and studied their timbral composition using "pitch-synchronous" spectrum analysis tools, revealing that the amplitude and frequency of the harmonics (more correctly, partials) of these instruments would differ depending on frequency, duration and amplitude.

He is also credited with performing the first experiments on a range of synthesis techniques including FM Synthesis and waveshaping. He has also created a similar effect with rhythm in which tempo seems to increase or decrease endlessly.[1][2] Jean-Claude Risset - Music is meant to be heard: Perception is central in (my) computer music. Jean-Claude Risset - Computer Suite From Little Boy (1968) Harvey Fletcher, and the Bell Labs Experimental Recordings. INART 55 Bell Labs. During World War II, Bell Labs evolved from a communications research firm to a more general think tank. 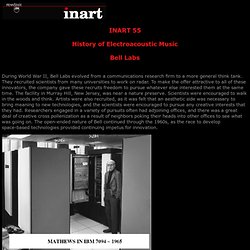 They recruited scientists from many universities to work on radar. To make the offer attractive to all of these innovators, the company gave these recruits freedom to pursue whatever else interested them at the same time. The facility in Murray Hill, New Jersey, was near a nature preserve. Scientists were encouraged to walk in the woods and think. Artists were also recruited, as it was felt that an aesthetic side was necessary to bring meaning to new technologies, and the scientists were encouraged to pursue any creative interests that they had. INART 55 Bell Labs in the 1960s. Mathews and Pierce continued in their enthusiasm and advocacy of the computer as a musical instrument. 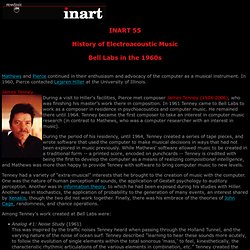 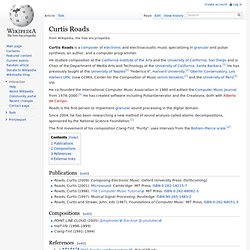 Max Mathews Radio Baton Demonstration. Max Matthews on MUSIC I - the beginning of computer music - Bell Labs. Max's Music. PDP-10. KL10-DA 1090 CPU and 6 Memory Modules PDP-10 systems on the ARPANET highlighted in yellow The PDP-10 was a mainframe computer family[1] manufactured by Digital Equipment Corporation (DEC) from 1966[2] into the 1980s. 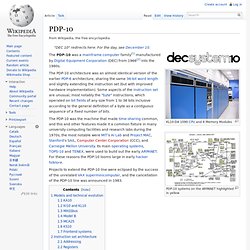 The PDP-10 architecture was an almost identical version of the earlier PDP-6 architecture, sharing the same 36-bit word length and slightly extending the instruction set (but with improved hardware implementation). Some aspects of the instruction set are unusual, most notably the "byte" instructions, which operated on bit fields of any size from 1 to 36 bits inclusive according to the general definition of a byte as a contiguous sequence of a fixed number of bits. YouTube. John Chowning - Turenas. Yamaha DX7. The Yamaha DX7 is a phase modulation based (marketed as frequency modulation) digital synthesizer manufactured by the Yamaha Corporation from 1983 to 1986. 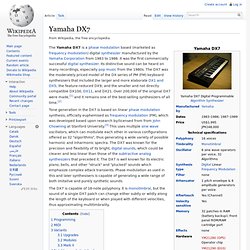 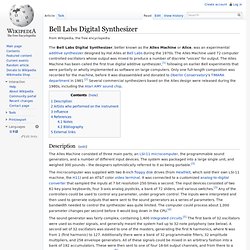 The Alles Machine used 72 computer controlled oscillators whose output was mixed to produce a number of discrete "voices" for output. The Alles Machine has been called the first true digital additive synthesizer,[1] following on earlier Bell experiments that were partially or wholly implemented as software on large computers. Only one full-length composition was recorded for the machine, before it was disassembled and donated to Oberlin Conservatory's TIMARA department in 1981.[2] Several commercial synthesizers based on the Alles design were released during the 1980s, including the Atari AMY sound chip.

Description[edit] MUSIC-N. MUSIC-N refers to a family of computer music programs and programming languages descended from or influenced by MUSIC, a program written by Max Mathews in 1957 at Bell Labs.[1] MUSIC was the first computer program for generating digital audio waveforms through direct synthesis. It was one of the first programs for making music (in actuality, sound) on a digital computer, and was certainly the first program to gain wide acceptance in the music research community as viable for that task. The world's first computer-controlled music was generated in Australia by programmer Geoff Hill on the CSIRAC computer which was designed and built by Trevor Pearcey and Maston Beard.[2] However, CSIRAC produced sound by sending raw pulses to the speaker, it did not produce standard digital audio with PCM samples, like the MUSIC-series of programs.