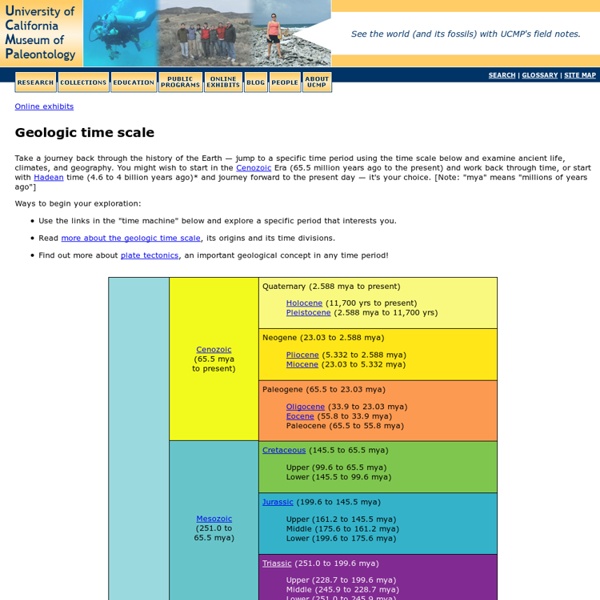 Online exhibits Geologic time scale Take a journey back through the history of the Earth — jump to a specific time period using the time scale below and examine ancient life, climates, and geography. You might wish to start in the Cenozoic Era (65.5 million years ago to the present) and work back through time, or start with Hadean time (4.6 to 4 billion years ago)* and journey forward to the present day — it's your choice. [Note: "mya" means "millions of years ago"] Ways to begin your exploration: Use the links in the "time machine" below and explore a specific period that interests you.Read more about the geologic time scale, its origins and its time divisions.Find out more about plate tectonics, an important geological concept in any time period!

Hadean: Overview The name Hadean Eon comes from Hades, the underworld of Greek mythology. It refers to the “hellish” conditions of the Earth during the earliest part of its history, when much of the Earth’s surface remained molten. The Hadean Eon of geologic time began with the birth of the solar system, including our planet, Earth, and ended with the formation of the oldest rocks that are still preserved on the surface of Earth. The Hadean is the first period in Earth history, but one for which we have little record. The Earth began to form about 4.6 billion years ago through the condensation of material around the sun. As this material collected, further cosmic material was drawn to it by gravity from all directions, increasing the size of the Earth.

List of timelines From Wikipedia, the free encyclopedia This is a list of timelines currently on Wikipedia. §Types[edit] Brief Timeline of American Literature and Events, 1620-1920 Brief Timeline of American Literature and Events: Pre-1620 to 1920 This timeline provides a short chronology of events in American history and literature. It is linked to course pages and bibliographies as well as to a set of more general linked resources: pages on American authors, literary movements, and American literature sites. Each author page contains a picture (if available), a bibliography (if available), links to major sites about the author, and links to works online.

Geologic and Biological Timeline of the Earth Astronomical and geological evidence indicates that the Universe is approximately 13,700 million years old, and our solar system is about 4,567 million years old. Earth's Moon formed 4,450 million years ago, just 50 million years after the Earth's formation. Because the composition of the rocks retrieved from the Moon by the Apollo missions is very similar to rocks from the Earth, it is thought that the Moon formed as a result of a collision between the young Earth and a Mars-sized body, sometimes called Theia, which accreted at a Lagrangian point 60° ahead or behind the Earth.

English Timeline This interactive timeline allows you to explore the evolution of English language and literature, from the 11th century to the present day. Scroll through decade by decade to investigate the richness and diversity of our poetry and prose, as well as the many social, cultural and political strands from which our language has been woven. The timeline includes a fascinating combination of texts: Anglo Saxon tales and medieval illuminations; iconic literary manuscripts and printed texts; as well as letters, newspapers, handbills, posters, charters, speeches and campaign leaflets.