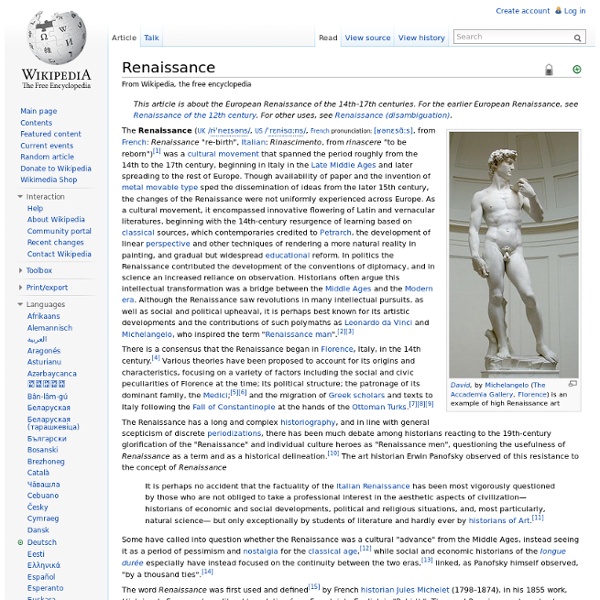 The Renaissance (UK /rɨˈneɪsəns/, US /ˈrɛnɨsɑːns/, French pronunciation: ​[ʁənɛsɑ̃s], from French: Renaissance "re-birth", Italian: Rinascimento, from rinascere "to be reborn")[1] was a cultural movement that spanned the period roughly from the 14th to the 17th century, beginning in Italy in the Late Middle Ages and later spreading to the rest of Europe. Though availability of paper and the invention of metal movable type sped the dissemination of ideas from the later 15th century, the changes of the Renaissance were not uniformly experienced across Europe. In politics, the Renaissance contributed the development of the conventions of diplomacy, and in science an increased reliance on observation. Historians often argue this intellectual transformation was a bridge between the Middle Ages and Modern history. Overview[edit] The Renaissance was a cultural movement that profoundly affected European intellectual life in the early modern period. Origins[edit] Black Death/Plague[edit]

Rwandan Genocide The Rwandan Genocide was a genocidal mass slaughter of Tutsi and moderate Hutu in Rwanda by members of the Hutu majority. During the approximate 100-day period from April 7, 1994, to mid-July, an estimated 500,000–1,000,000 Rwandans were killed,[1] constituting as much as 20% of the country's total population and 70% of the Tutsi then living in Rwanda. The genocide was planned by members of the core political elite known as the akazu, many of whom occupied positions at top levels of the national government. Perpetrators came from the ranks of the Rwandan army, the National Police (gendarmerie), government-backed militias including the Interahamwe and Impuzamugambi, and the Hutu civilian population. The genocide had a lasting and profound impact on Rwanda and its neighboring countries. The pervasive use of war rape caused a spike in HIV infection, including babies born of rape to newly infected mothers; many households were headed by orphaned children or widows.

Battle of Thermopylae The Battle of Thermopylae (/θərˈmɒpɨliː/ thər-MOP-i-lee; Greek: Μάχη τῶν Θερμοπυλῶν, Machē tōn Thermopylōn) was fought between an alliance of Greek city-states, led by King Leonidas of Sparta, and the Persian Empire of Xerxes I over the course of three days, during the second Persian invasion of Greece. It took place simultaneously with the naval battle at Artemisium, in August or September 480 BC, at the narrow coastal pass of Thermopylae ('The Hot Gates'). The Persian invasion was a delayed response to the defeat of the first Persian invasion of Greece, which had been ended by the Athenian victory at the Battle of Marathon in 490 BC. Xerxes had amassed a huge army and navy, and set out to conquer all of Greece. The Athenian general Themistocles had proposed that the allied Greeks block the advance of the Persian army at the pass of Thermopylae, and simultaneously block the Persian navy at the Straits of Artemisium. Sources[edit]

Cuban missile crisis The Cuban missile crisis — known as the October Crisis or The Missile Scare (Spanish: Crisis de octubre) in Cuba and the Caribbean Crisis (Russian: Карибский кризис, tr. Karibskiy krizis) in the former USSR — was a 13-day confrontation in October 1962 between the Soviet Union and Cuba on one side and the United States on the other side. The crisis is generally regarded as the moment in which the Cold War came closest to turning into a nuclear conflict[1] and is also the first documented instance of mutual assured destruction (MAD) being discussed as a determining factor in a major international arms agreement.[2][3] After the US had placed nuclear missiles in Turkey and Italy, aimed at Moscow, and the failed US attempt to overthrow the Cuban regime, in May 1962 Nikita Khrushchev proposed the idea of placing Soviet nuclear missiles in Cuba to deter any future invasion attempt.

Boudica "Boudicca" redirects here. For the cruise ship, see MV Boudicca. Boudica's husband Prasutagus was ruler of the Iceni tribe. He ruled as a nominally independent ally of Rome and left his kingdom jointly to his daughters and the Roman emperor in his will. However, when he died, his will was ignored and the kingdom was annexed as if conquered.

Thirty Tyrants The 30 Tyrants (Ancient Greek: οἱ τριάκοντα τύραννοι) were a pro-Spartan oligarchy installed in Athens after its defeat in the Peloponnesian War in 404 BC. Contemporary Athenians referred to them simply as "the oligarchy" or "the Thirty" (Ancient Greek: οἱ Τριάκοντα); the expression "Thirty Tyrants" is due to later historians.[1] Its two leading members were Critias and Theramenes. The rule of the Thirty[edit] 10 of the Biggest Lies in History" According to myth, a young George Washington confessed to cutting down a cherry tree by proclaiming, "I cannot tell a lie." The story is testament to how much respect Americans have for their cherished first president and honesty in general. Unfortunately, in the annals of history it seems there are 10 dishonest scoundrels for every honorable hero like Washington.

Waco siege The Waco siege (also known as the Waco Massacre) was a siege of a compound belonging to the religious group Branch Davidians by American federal and Texas state law enforcement and military between February 28 and April 19, 1993.[4] The Branch Davidians, a sect that separated in 1955 from the Seventh-day Adventist Church, was led by David Koresh and lived at Mount Carmel Center ranch in the community of Elk, Texas,[5][6][7] nine miles (14 kilometers) east-northeast of Waco. The group was suspected of weapons violations and a search and arrest warrant was obtained by the U.S. federal agency Bureau of Alcohol, Tobacco and Firearms (ATF). The incident began when the ATF attempted to raid the ranch. An intense gun battle erupted, resulting in the deaths of four agents and six Branch Davidians. Upon the ATF's failure to raid the compound, a siege was initiated by the Federal Bureau of Investigation (FBI), the standoff lasting 51 days.

Ruby Ridge Ruby Ridge was the site of a deadly confrontation and siege in northern Idaho in 1992 against Randy Weaver, his family and his friend Kevin Harris by agents of the United States Marshals Service (USMS) and Federal Bureau of Investigation (FBI). It resulted in the death of Weaver's son Sammy, his wife Vicki, and Deputy U.S. Marshal William Francis Degan. At the subsequent federal criminal trial of Weaver and Harris, Weaver's attorney Gerry Spence made accusations of "criminal wrongdoing" against every agency involved in the incident: the FBI, USMS, the Bureau of Alcohol, Tobacco, Firearms and Explosives (ATF), and the United States Attorney's Office (USAO) for Idaho.

Hitler at 50: Rare Color Photos of a Despot's Birthday, April 1939 We do not usually give so much space to the work of men we admire so little. So began a remarkable editor’s note to LIFE’s readers in an April 1970 issue of the magazine, introducing a photographer named Hugo Jaeger — a man who, the note pointed out, “was a fascist before the Nazi party was formed.” In that issue, LIFE published a series of startling color pictures that Jaeger made in the late 1930s and 1940s, when he enjoyed unprecedented access to the Third Reich’s upper echelon, traveling with and chronicling Adolf Hitler and his Nazi cohorts at massive rallies and, frequently, in quieter, private moments, as well.

10 Accidental Inventions You Won't Believe" In an era of constant innovation and discovery, we may not realize that most inventions take years to develop. But sometimes, all it takes is an accident. Here are 10 inventions we'd never be able to enjoy if not for an apparent mistake.