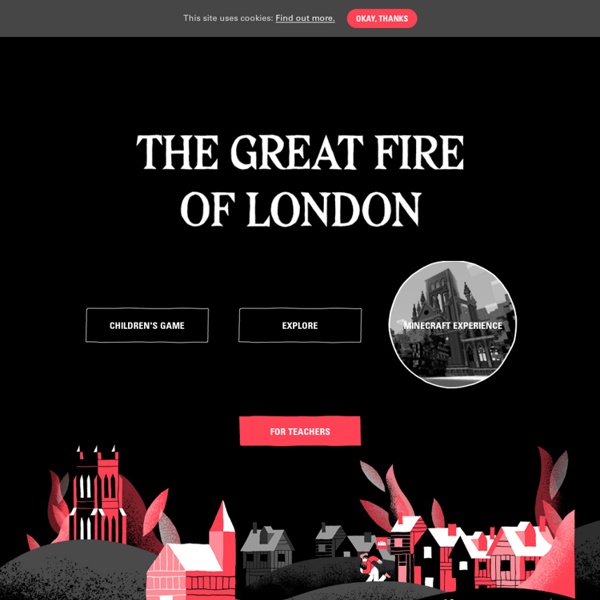 Getting to London from an Airport (Page updated August 2013) London is a major port. It has three airports, which are all located outside the city area: Heathrow, Gatwick and Stansted. London is the hub of the United Kingdom's rail network, with about a dozen mainline railway terminuses. Welcome...to the Renaissance As of July 1, 2013 ThinkQuest has been discontinued. We would like to thank everyone for being a part of the ThinkQuest global community: Students - For your limitless creativity and innovation, which inspires us all. Teachers - For your passion in guiding students on their quest. Partners - For your unwavering support and evangelism. Parents - For supporting the use of technology not only as an instrument of learning, but as a means of creating knowledge.

Seven ideas for using mobile phones in the classroom The post was talking about if mobile phones are really a distraction and how they relate to classroom management. It talks about a place for mobile phones and says: “Smartphones are here to stay. Listening: A Tour of London Tower Bridge, London (Copyright: Getty) When you visit a city for the first time, a good way to explore it is to go on an organised sightseeing tour. The tour will give you an overview of what there is to see and also provide you with some historical background. A popular way of seeing London is to go in one of the red double deck buses. This tour will take you around London by bus. Listen to the guide, and then do the activity below. EyeWitness To The Middle Ages and Renaissance Life in a Christian Monastery, ca. 585"When he was dead his body was not placed with the bodies of the brethren, but a grave was dug in the dung pit, and his body was flung down into it. . . " Crime and punishment in a medieval monastery: the monastery's Abbott provides insight into the monastic life. The Vikings Discover America, ca. 1000"There was no want of salmon either in the river or in the lake." Five hundred years before Columbus, the Vikings discover a New World.

Great Ways to Teach Any Day's Times Illustration by Kevin O’Callaghan; photograph by MYKO PhotographyIllustration from the Times Topic Page on The New York Times Warm-up activities, curriculum extensions, skill builders, literacy games, substitute lessons, or just for fun: this collection of reusable activity sheets in PDF is one-stop shopping for all of these purposes and more. Each idea below can be used with any day’s edition of The New York Times.

Let's talk about the UK (still with Scotland) At the beginning of the new school year teachers usually explain to their students what they are going to study. Sometimes efl teachers not only teach grammar but also British culture, so one of the first cultural topics they discuss with their students are the geography of the UK and its form of government. Here you can find an interactive mindmap, a digital poster and a collection of useful websites, just to simplify the work. Crusades The Crusades were military campaigns sanctioned by the Latin Roman Catholic Church during the High Middle Ages through to the end of the Late Middle Ages. In 1095 Pope Urban II proclaimed the first crusade, with the stated goal of restoring Christian access to the holy places in and near Jerusalem. Many historians and some of those involved at the time, like Saint Bernard of Clairvaux, give equal precedence to other papal-sanctioned military campaigns undertaken for a variety of religious, economic, and political reasons, such as the Albigensian Crusade, the Aragonese Crusade, the Reconquista, and the Northern Crusades.[1] Following the first crusade there was an intermittent 200-year struggle for control of the Holy Land, with six more major crusades and numerous minor ones. In 1291, the conflict ended in failure with the fall of the last Christian stronghold in the Holy Land at Acre, after which Roman Catholic Europe mounted no further coherent response in the east. Terminology[edit]

Find the gap - increasing speaking in class This article looks at how the notion of a gap between speakers can be used to provide a reason for communication. Finding ways to create gaps between students, gaps which need closing, creates speaking opportunities and prompts the creation of new activities. What is a gap?