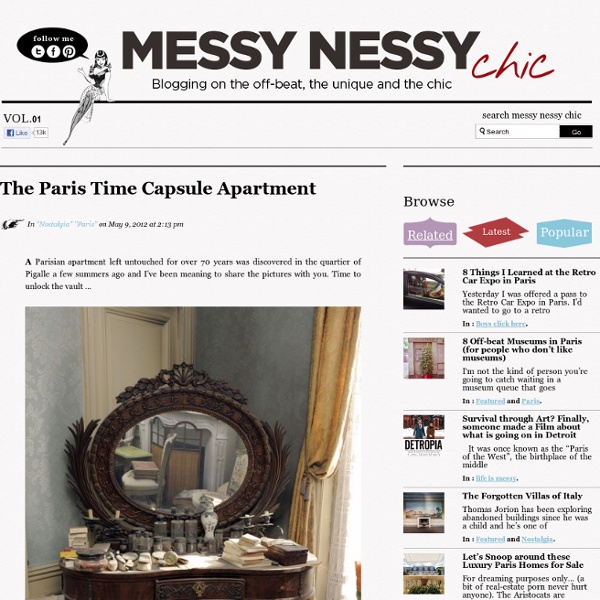 A Parisian apartment left untouched for over 70 years was discovered in the quartier of Pigalle a few summers ago and I’ve been meaning to share the pictures with you. Time to unlock the vault … The owner of this apartment, Mrs. De Florian left Paris just before the rumblings of World War II broke out in Europe. She closed up her shutters and left for the South of France, never to return to the city again. Seven decades later she passed away at the age of 91. The team that had the honor of opening what must have been a very stiff old lock for the first time in 70 years, likened the experience to ‘stumbling into the castle of sleeping beauty’. There is a further twist to the story. With some expert historical opinion, the ribbon-bound love letters were quickly recognized as the calling card of none other than Giovanni Boldini, one of Paris’ most important painters of the Belle Époque. What kept her away even after the war? via The Telegraph, photos by GETTY. Related:  Timeline • Paris

wait but why: Putting Time In Perspective Humans are good at a lot of things, but putting time in perspective is not one of them. It’s not our fault—the spans of time in human history, and even more so in natural history, are so vast compared to the span of our life and recent history that it’s almost impossible to get a handle on it. If the Earth formed at midnight and the present moment is the next midnight, 24 hours later, modern humans have been around since 11:59:59pm—1 second. And if human history itself spans 24 hours from one midnight to the next, 14 minutes represents the time since Christ. To try to grasp some perspective, I mapped out the history of time as a series of growing timelines—each timeline contains all the previous timelines (colors will help you see which timelines are which). A note on dates: When it comes to the far-back past, most of the dates we know are the subject of ongoing debate. For teachers and parents and people who hate cursing: here’s a clean, Rated G version.

Found at Auction: The Unseen Photographs of a Legend that Never Was Picture this: quite possibly the most important street photographer of the 20th century was a 1950s children’s nanny who kept herself to herself and never showed a single one of her photographs to anyone. Decades later in 2007, a Chicago real estate agent and historical hobbyist, John Maloof purchased a box of never-seen, never-developed film negatives of an unknown ‘amateur’ photographer for $380 at his local auction house. John began developing his new collection of photographs, some 100,000 negatives in total, that had been abandoned in a storage locker in Chicago before they ended up at the auction house. It became clear these were no ordinary street snaps of 1950s & 60s Chicago and New York and so John embarked on a journey to find out who was behind the photographs and soon discovered her name: Vivien Maier. A self portrait: Before he could reach her, to John’s great dismay, he found her obituary notice in the Chicago Tribune in 2009. The film will begin screenings in March 2014.

Bilresan till kontinenten 1939 (1939) - Filmarkivet Harry von Eckermanns samling nummer 6. Amatörfilm från resa genom Europa några månader innan andra världskriget bryter ut. Läs mer om filmen i SMDB "Genom Centraleuropa 23/4 - 20/5 1939. Glass rain may give planet blue hue 11 July 2013Last updated at 11:23 ET The turbulent alien world - seen in this artist's impression - lies some 63 light-years from Earth For the first time, astronomers have determined the true colour of a planet orbiting another star. The world, known as HD189733b, has a deep azure hue - probably the result of silicate (glass) rain in the atmosphere, which scatters blue light. Details of the discovery, made with the Hubble Space Telescope, are to appear in Astrophysical Journal Letters. Although it might resemble Earth from a distance, HD189733b is a huge gas giant which orbits close to its host star. The temperature of the planet's atmosphere is a scorching 1,000C, and it rains glass, sideways, in howling 7,000km-per-hour winds. Its atmosphere has been found to be dramatically changeable and exotic, with hazes and violent bursts of evaporation. It has been extensively studied by ground- and space-based telescopes. HD 189733b is faint and close to its sun.

Perhaps Paris Listen, there is no way around it. In the article that follows I'm going to be forced to wield sweeping generalisations, peddle the occasional stereotype, and generally piss off the people of my adopted home. However. It needs to be done. It's like one of those difficult talks that normally take place in the kitchen and are basically painful for one party. Caveat in place, here we go. Paris, and France in general, is not a significant cultural centre. Perhaps a ridiculous thing to say, particularly in terms of art. And it is in this question that we start to approach the centre of what I'm getting at. Two things. Firstly a truly international outlook, a permeability and openness to things that are not French. Secondly, the energy and conditions that generate great art. Dealing with them in order. By way of an example. FIAC 2012 will bring together around 180 galleries from 24 countries at the Grand Palais. Here is the equivalant text from Frieze in London: And Basel: Second point.

Science Shows Prehistoric Gender Equality: Cave Women Rocked You know the cartoon where a caveman clubs a cavewoman over the head, then drags her to his lair by her hair? The blood-boiling message is that male dominance is natural and immutable, rooted deeply in our genes and behavior. Screw that. Scientists are finding that in prehistoric societies, females may have been equal to males in many ways. 1. Take the assumption that men painted and drew the images we can still see in their caves. It turns out that women made their mark too — they may even have been responsible for the majority of those pictures. 2. The stencils women made of their hands appear next to paintings of animals their societies hunted and ate. Some anthropologists argue that female Neanderthals participated in hunting, a dangerous activity, in part based on their skeletons’ displaying the same bone fractures as male skeletons do. 3. If everyone stayed in those little prehistoric cave clans and mated with the folks they knew, some scary inbreeding would result. 4.

'Alex & Me': The Parrot Who Said 'I Love You' Ristretto | Paris is Brewing Hoi Chi Ng Télescope, a cafe run by Nicolas Clerc and David Flynn in the First Arrondissement in Paris. Finally, Paris has a coffee scene. The city has always been the paradox of the industry, a great cafe town where an otherwise discerning audience happily throws back watery shots of ashy swill. I first wrote about Paris coffee in 2010, and after returning to the topic last year I decided to sit on my hands until somebody in the city figured out what it was missing. It happened. This year, three cafes opened that treat coffee as if it’s a part of the world of gastronomy , a drink to be crafted and savored, rather than a commodity, sold as if it’s fuel. The city is late to the dance — it’s easier to get a beautiful espresso by the Barbican than by the Bastille — but let’s not hold that against them.