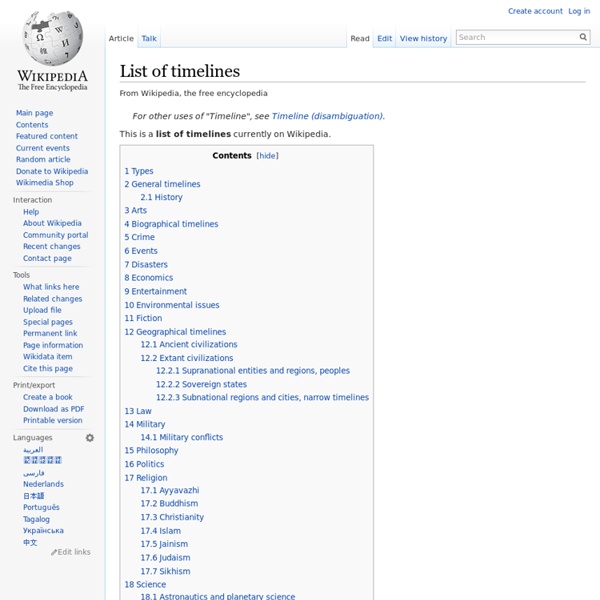 Timeline of mathematics A timeline of pure and applied mathematics history. Timeline[edit] Rhetorical stage[edit] Before 1000 BC[edit] Geologic time scale Online exhibits Geologic time scale Take a journey back through the history of the Earth — jump to a specific time period using the time scale below and examine ancient life, climates, and geography. You might wish to start in the Cenozoic Era (65.5 million years ago to the present) and work back through time, or start with Hadean time (4.6 to 4 billion years ago)* and journey forward to the present day — it's your choice. Muturzikin - Linguistic maps [en][fr][eu][es] Muturzikin.com © 2005-2016 All right reserved-Tous droits réservés Rouyn-Noranda, Québec, Canada Linguistic criteria, internal policy, terms of use, principal references and FAQ These maps display the ethnic and linguistic complexities in some parts of the world that are too often ignored or discarded by nationalists. Most people are conditioned to think nationalistically without even necessarily being aware of it.

Space Age The signals of Sputnik 1 continued for 22 days. The Space Age is a time period encompassing the activities related to the Space Race, space exploration, space technology, and the cultural developments influenced by these events. The Space Age is generally considered to have begun with Sputnik (1957). Brief Timeline of American Literature and Events, 1620-1920 Brief Timeline of American Literature and Events: Pre-1620 to 1920 This timeline provides a short chronology of events in American history and literature. It is linked to course pages and bibliographies as well as to a set of more general linked resources: pages on American authors, literary movements, and American literature sites. Each author page contains a picture (if available), a bibliography (if available), links to major sites about the author, and links to works online.

Information Age A visualization of the various routes through a portion of the Internet. The Information Age (also known as the Computer Age, Digital Age, or New Media Age) is a period in human history characterized by the shift from traditional industry that the industrial revolution brought through industrialization, to an economy based on information computerization. The onset of the Information Age is associated with the Digital Revolution, just as the Industrial Revolution marked the onset of the Industrial Age. During the information age, the phenomenon is that the digital industry creates a knowledge-based society surrounded by a high-tech global economy that spans over its influence on how the manufacturing throughput and the service sector operate in an efficient and convenient way. The Internet[edit]

OLAC Language Resource Catalog n.a. 2014. Max Planck Institute for Evolutionary Anthropology. Lewis, William. 2007-06-27. Dot-com bubble The period was marked by the founding (and, in many cases, spectacular failure) of a group of new Internet-based companies commonly referred to as dot-coms. Companies could cause their stock prices to increase by simply adding an "e-" prefix to their name or a ".com" to the end, which one author called "prefix investing."[3] A combination of rapidly increasing stock prices, market confidence that the companies would turn future profits, individual speculation in stocks, and widely available venture capital created an environment in which many investors were willing to overlook traditional metrics, such as P/E ratio, in favor of basing confidence on technological advancements. The collapse of the bubble took place during 1999–2001.