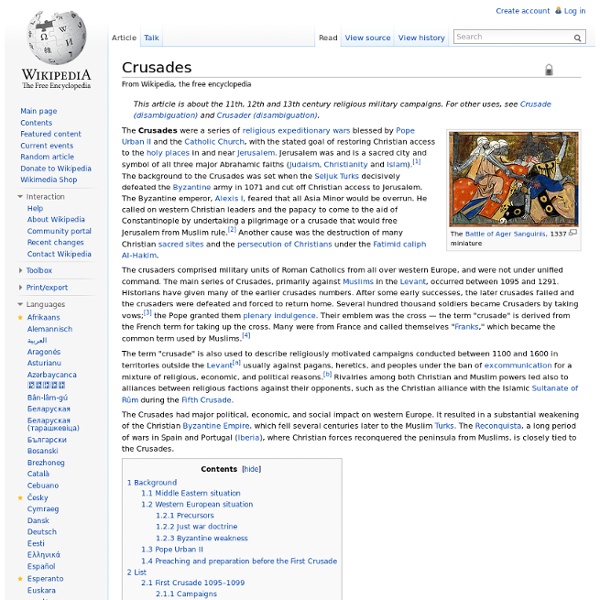 The Crusades were military campaigns sanctioned by the Latin Roman Catholic Church during the High Middle Ages through to the end of the Late Middle Ages. In 1095 Pope Urban II proclaimed the first crusade, with the stated goal of restoring Christian access to the holy places in and near Jerusalem. Many historians and some of those involved at the time, like Saint Bernard of Clairvaux, give equal precedence to other papal-sanctioned military campaigns undertaken for a variety of religious, economic, and political reasons, such as the Albigensian Crusade, the Aragonese Crusade, the Reconquista, and the Northern Crusades.[1] Following the first crusade there was an intermittent 200-year struggle for control of the Holy Land, with six more major crusades and numerous minor ones. In 1291, the conflict ended in failure with the fall of the last Christian stronghold in the Holy Land at Acre, after which Roman Catholic Europe mounted no further coherent response in the east. Terminology[edit]

Crusade From Academic Kids The Crusades were a series of several military campaigns — usually sanctioned by the Papacy— that took place during the 11th through 13th centuries. Originally, they were Roman Catholic endeavors to re-capture the Holy Land from the Muslims, but some were directed against other Europeans, such as the Fourth Crusade against Constantinople, the Albigensian Crusade against the Cathars of southern France and the Northern Crusades. Beyond the Medieval military events, the word crusade has evolved to have multiple meanings and connotations. For additional meanings see Usage of the term "crusade". Historical background The origins of the crusades lie in Western developments earlier in the Middle Ages, as well as the deteriorating situation of the Byzantine Empire. One later outlet was the Reconquista in Spain, which at times occupied Spanish knights and some mercenaries from elsewhere in Europe in the fight against the Islamic Moors. Historical context The major crusades

Dark Ages (historiography) The Dark Ages is a historical periodization used originally for the Middle Ages, which emphasizes the cultural and economic deterioration that supposedly occurred in Western Europe following the decline of the Roman Empire.[1][2] The label employs traditional light-versus-darkness imagery to contrast the "darkness" of the period with earlier and later periods of "light".[3] The period is characterized by a relative scarcity of historical and other written records at least for some areas of Europe, rendering it obscure to historians. The term "Dark Age" derives from the Latin saeculum obscurum, originally applied by Caesar Baronius in 1602 to a tumultuous period in the 10th and 11th centuries.[4] The term "Dark Ages" originally was intended to denote the entire period between the fall of Rome and the Renaissance; the term "Middle Ages" has a similar motivation, implying an intermediate period between Classical Antiquity and the Modern era.

Reconquista The Reconquista ("reconquest")[a][b] is a period of approximately 781 years in the history of the Iberian Peninsula, after the Islamic conquest in 711-718 to the fall of Granada, the last Islamic state on the peninsula, in 1492. It comes before the discovery of the New World, and the period of the Portuguese and Spanish colonial empires which followed. Traditionally, historians mark the beginning of the Reconquista with the Battle of Covadonga (718 or 722), in which a small army, led by the Visigothic nobleman Pelagius, defeated an Umayyad army in the mountains of northern Iberia and established a small Christian principality in Asturias. Concept and duration[edit] The Reconquista, 790-1300 A landmark was set by the Christian Chronica Prophetica (883-884), a document stressing the Christian and Muslim cultural and religious divide in Iberia and the necessity to drive the Muslims out. Background[edit] Islamic conquest of Christian Iberia[edit] Islamic rule[edit] Franks and Al-Andalus[edit]

Age of Enlightenment The Age of Enlightenment (or simply the Enlightenment, or Age of Reason) is an era from the 1650s to the 1780s in which cultural and intellectual forces in Western Europe emphasized reason, analysis and individualism rather than traditional lines of authority. It was promoted by philosophes and local thinkers in urban coffeehouses, salons and masonic lodges. It challenged the authority of institutions that were deeply rooted in society, such as the Catholic Church; there was much talk of ways to reform society with toleration, science and skepticism. New ideas and beliefs spread around the continent and were fostered by an increase in literacy due to a departure from solely religious texts. Publications include Encyclopédie (1751–72) that was edited by Denis Diderot and (until 1759) Jean le Rond d'Alembert. Use of the term[edit] If there is something you know, communicate it. Chartier (1991) argues that the Enlightenment was only invented after the fact for a political goal. Goals[edit]

Mahdia campaign The Mahdia campaign of 1087 was an attack on the North African town of Mahdia by armed ships from Genoa and Pisa in northern Italy. It had been prompted by the actions of its ruler Tamim ibn Muizz (rule 1062–1108) as a pirate in waters off the Italian peninsula, along with his involvement in Sicily fighting the Norman invasion. The attack was led by Hugh of Pisa, with military aid from Rome; the nobleman Pantaleone from Amalfi was also involved, and the whole endeavour had the backing of Matilda of Tuscany. Crusade historian Carl Erdmann considers the raid a direct precursor to the First Crusade ("ganz als Kreuzzug ausgeführt") which occurred eight years later, as it was conducted under the banner of St. The main source for the campaigns is the Carmen in victoriam Pisanorum, written within months of it by a Pisan religious. Erdmann, Carl.

Middle Ages In European history, the Middle Ages, or Medieval period, lasted from the 5th to the 15th century. It began with the collapse of the Western Roman Empire and merged into the Renaissance and the Age of Discovery. The Middle Ages is the middle period of the three traditional divisions of Western history: Antiquity, Medieval period, and Modern period. The Medieval period is itself subdivided into the Early, the High, and the Late Middle Ages. Depopulation, deurbanisation, invasion, and movement of peoples, which had begun in Late Antiquity, continued in the Early Middle Ages. During the High Middle Ages, which began after AD 1000, the population of Europe increased greatly as technological and agricultural innovations allowed trade to flourish and the Medieval Warm Period climate change allowed crop yields to increase. Etymology and periodisation[edit] Later Roman Empire[edit] Map of the approximate political boundaries in Europe around 450 Early Middle Ages[edit] New societies[edit]

Renaissance The Renaissance (UK /rɨˈneɪsəns/, US /ˈrɛnɨsɑːns/, French pronunciation: ​[ʁənɛsɑ̃s], from French: Renaissance "re-birth", Italian: Rinascimento, from rinascere "to be reborn")[1] was a cultural movement that spanned the period roughly from the 14th to the 17th century, beginning in Italy in the Late Middle Ages and later spreading to the rest of Europe. Though availability of paper and the invention of metal movable type sped the dissemination of ideas from the later 15th century, the changes of the Renaissance were not uniformly experienced across Europe. In politics, the Renaissance contributed the development of the conventions of diplomacy, and in science an increased reliance on observation. Historians often argue this intellectual transformation was a bridge between the Middle Ages and Modern history. Overview[edit] The Renaissance was a cultural movement that profoundly affected European intellectual life in the early modern period. Origins[edit] Black Death/Plague[edit]

History of the world World population[1] from 10,000 BCE to 2,000 CE. The vertical (population) scale is logarithmic. The history of the world is the history of humanity, beginning with the Paleolithic Era. Distinct from the history of the Earth (which includes early geologic history and prehuman biological eras), world history comprises the study of archaeological and written records, from ancient times on. Ancient recorded history begins with the invention of writing.[2][3] However, the roots of civilization reach back to the period before the invention of writing. Outside the Old World, including ancient China[27] and ancient India, historical timelines unfolded differently. Prehistory[edit] Early humans[edit] Modern humans spread rapidly from Africa into the frost-free zones of Europe and Asia around 60,000 years ago.[32] The rapid expansion of humankind to North America and Oceania took place at the climax of the most recent Ice Age, when temperate regions of today were extremely inhospitable.

What did the Knights Templar Do The Knights Templar were created by the pope to escort and protect "tourists" going to the Holy Land, and to fight Muslims there. There were originally only a handful, but there were thousands by the time they were disbanded in the 1300's. They were the first bankers. Eventually they became so wealthy, and so many royals owed them so much money, that they became a target. Interestingly, at the time the Templars were disbanded, the Swiss people (right across the border from France, of course) were mainly farmers with little or no military training.