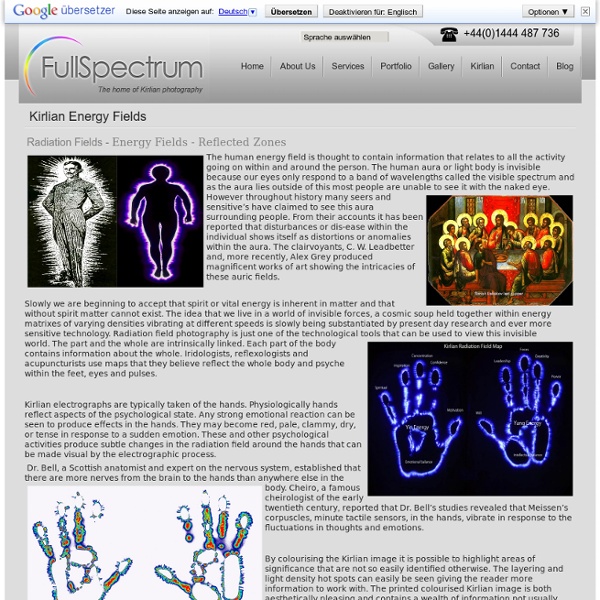 Radiation Fields - Energy Fields - Reflected Zones The human energy field is thought to contain information that relates to all the activity going on within and around the person. The human aura or light body is invisible because our eyes only respond to a band of wavelengths called the visible spectrum and as the aura lies outside of this most people are unable to see it with the naked eye. However throughout history many seers and sensitive’s have claimed to see this aura surrounding people. From their accounts it has been reported that disturbances or dis-ease within the individual shows itself as distortions or anomalies within the aura. The clairvoyants, C. Slowly we are beginning to accept that spirit or vital energy is inherent in matter and that without spirit matter cannot exist. Each part of the body contains information about the whole. Kirlian electrographs are typically taken of the hands. Dr. in the body. Related:  science and beyond

Data Storage in Crystal Quartz will change Everything! You know how much I LOVE talking about new technology, right? Well, this is one that is going to blow your mind, make an excellent case for the Crystal Movement, and also mop the floor with “limited data storage” forever! There’s a new kind of storage device which many tech companies have been diving into in secret for the past few years, which Hitachi recently came out with a technology they are developing which is essentially a sheet of Quartz Glass, which could potentially save data up to 300 Million Years! If you didn’t know anything about storage devices that we currently have, but anything from records, CD’s, USB sticks, magnetic tape, none of these can even lay a finger on this new, very impressive technology. "The prototype is made of a square of quartz two centimeters wide and two millimeters thick. - From the Scientific American Journal Now, while this is exciting, there’s more to it than just that. - Computerworld It seems Crystals still got some magic after all

Scientists Just Created Crystals That Make Breathing Underwater A Possibility Danish scientists are a step closer to significantly helping people who suffer from respiratory ailments, thanks to a revolutionary new absorption crystal. Working out of the University of Southern Denmark, the group has uncovered crystalline materials which are capable of pulling oxygen out of both air and water, a discovery which could eventually mark the end of the need to carry around cumbersome oxygen tanks. The revolutionary crystalline material can bind and store oxygen in high concentrations, then control its release time depending on what the user needs. This new discovery could even benefit deep sea divers, giving them superhero-like abilities to stay submerged for extended periods of time without an air tank. The standard human body can function with only 21% oxygen in the air around us, but about when we need it in higher concentrations? The crystalline material changes color when absorbing or releasing oxygen. Professor McKenzie also revealed: Christine McKenzie explains:

Scientists Create Solid Light On a late summer afternoon it can seem like sunlight has turned to honey, but could liquid—or even solid—light be more than a piece of poetry? Princeton University electrical engineers say not only is it possible, they’ve already made it happen. In Physical Review X, the researchers reveal that they have locked individual photons together so that they become like a solid object. "It's something that we have never seen before," says Dr. Andrew Houck, an associate professor of electrical engineering and one of the researchers. The researchers constructed what they call an “artificial atom” made of 100 billion atoms engineered to act like a single unit. As some of the photons leaked into the surrounding environment, the oscillations slowed and at a critical point started producing quantum divergent behavior. "Here we set up a situation where light effectively behaves like a particle in the sense that two photons can interact very strongly," said co-author Dr.

Human Cells have Electric Fields as Powerful as Lighting Bolts -A Galaxy Insight Using newly developed voltage-sensitive nanoparticles, researchers have found that the previously unknown electric fields inside of cells are as strong, or stronger, as those produced in lightning bolts. Previously, it has only been possible to measure electric fields across cell membranes, not within the main bulk of cells, so scientists didn't even know cells had an internal electric field. This discovery is a surprising twist for cell researchers. Scientists don't know what causes these incredibly strong fields or why they' are there. University of Michigan researchers led by chemistry professor Raoul Kopelman encapsulated voltage-sensitive dyes in polymer spheres just 30 nanometers in diameter. "They have developed a tool that allows you to look at cellular changes on a very local level," said Piotr Grodzinski, director of the National Cancer Institute Alliance for Nanotechnology in Cancer in Technology Review. Posted by Rebecca Sato Related Galaxy posts:

Flowers get an electrifying buzz out of visiting bees - life - 21 February 2013 Plants could turn out to be one of the more chatty organisms. Recent studies have shown they can communicate with a surprising range of cues. Now it turns out they could be sending out electrical signals, too. As they fly through the air, bees – like all insects – acquire a positive electric charge. Flowers, on the other hand, are grounded and so have a negative charge. Daniel Robert at the University of Bristol, UK, and colleagues set out to investigate whether bumblebees (Bombus terrestris) were able to make use of these signals. To test the idea, the team created artificial flowers, filling some with sucrose and others with quinine, a substance bees don't feed on. "That was the first hint that had us jumping up and down in the lab," says Robert. Next, his team looked at whether the bees were influenced by the shape of a flower's electric field, which is determined by the flower's shape. Ruthless evolution Dishonest advertising Journal reference: Science, DOI: 10.1126/science.1230883

Does DNA Emit Light? Dan Eden for viewzone.com An incredible story! I get lots of suggestions for stories, and I really appreciate them. But some of them are too good to be true. I had this same experience this week when I was sent an article where a Russian (again) scientist, Pjotr Garjajev, had managed to intercept communication from a DNA molecule in the form of ultraviolet photons -- light! But this was just the beginning. Dr. I tried to find a scientific journal that had this experiment. Fritz-Albert Popp thought he had discovered a cure for cancer. It was 1970, and Popp, a theoretical biophysicist at the University of Marburg in Germany, had been teaching radiology -- the interaction of electromagnetic (EM) radiation on biological systems. He'd been examining two almost identical molecules: benzo[a]pyrene, a polycyclic hydrocarbon known to be one of the most lethal carcinogens to humans, and its twin (save for a tiny alteration in its molecular makeup), benzo[e]pyrene. Why Ultra-violet light? Photorepair

Related:
Related:  science and beyond