Beyond research and teaching

Mitigating circumstances: the problem we didn't see coming. What if we were serious about students at the heart of the system? Many parts of the English higher education sector as we knew it are ‘on the move’. 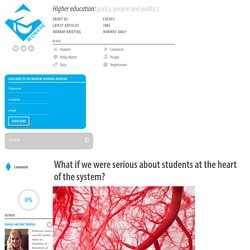 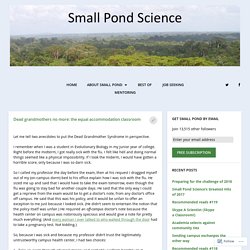 I remember when I was a student in Evolutionary Biology in my junior year of college. Right before the midterm, I got really sick with the flu. I felt like hell and doing normal things seemed like a physical impossibility. If I took the miderm, I would have gotten a horrible score, only because I was so darn sick. So I called my professor the day before the exam, then at his request I dragged myself out of my (on-campus dorm) bed to his office explain how I was sick with the flu. So, because I was sick and because my professor didn’t trust the legitimately untrustworthy campus health center, I had two choices: Take an exam through physical misery and probably perform horribly on it. I found both options to be miserable, but I chose #2 because I thought that my grade was important. This happened about 22 years ago. Here is my second anecdote, from just last year. Let’s consider Figure 1. 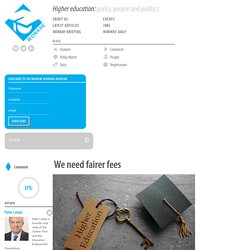 Jeremy Corbyn promised to scrap them. Theresa May has since raised the level when graduates start to repay their loans, as well as saying she wants a “major review” of student finance. Disillusion with the fee system has been building for some time. Since the £9000 fees were introduced, Sutton Trust research has found that English students have by far the highest levels of debt in the English-speaking world, owing around £46,000 when they graduate. Short-term study abroad ‘better for building teamwork skills’ Students who go abroad as part of their degree for a short period of time develop better teamwork skills than those who go overseas for a year, while other areas of development are unaffected by the duration of international study, according to a survey of alumni. 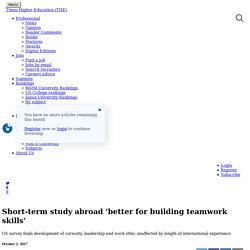 Missing from the tuition fees debate: student well-being and the public benefits of higher education. As the summer comes to an end and a new academic year approaches, another wave of soon to be university students are eagerly awaiting the next stage in their educational journey. 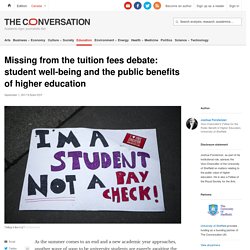 For many of these students, it will have been a summer of firsts: first time on holiday with their friends, first time preparing to move away from home, and the first time voting in a general election. This was an election that saw youth turnout reach a 25-year high and many young people were motivated to vote for the Labour Party – at least partly because of a promise to abolish university tuition fees and to reintroduce maintenance grants.

This spike in youth political mobilisation came as a surprise to some, but less so to those who work with young people. Theconversation. A recent report by the Chartered Institute of Personnel and Development (CIPD) claimed that the UK is one of the very few EU countries which saw larger growth in low-skill jobs than in high-skill ones between 1996 and 2008. 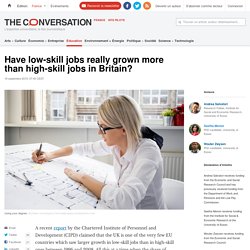 All this at a time when the share of graduates in the economy increased dramatically. The report received widespread attention and makes other interesting points which were summarised by the authors in an article for The Conversation. But in our own ongoing research, we’ve concluded that the finding that low-skill jobs grew more than higher-skill ones is driven by a problem in the data used – the European Labour Force Survey. How to use social media to get a graduate job. The question is, how can graduates take advantage of social media opportunities in order to stand out from the crowd? 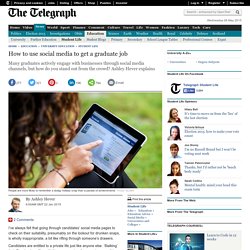 Start your own blog Starting your own blog is a fantastic way to demonstrate numerous transferable skills to potential future employers. Writing well is a valuable skill and a blog is a simple yet effective way to demonstrate your ability to write a wide range of content. Setting up the blog itself also shows that you have initiative, while posting consistently will demonstrate reliability and an ability to see things through. Which UK city is best for graduate prospects? One of the first things you’re told when you start university is to make the most of being a fresher; because before you know it you’ll be approaching the end of third year, on your fourth coffee of the day and filling out your fifth job application of the week. 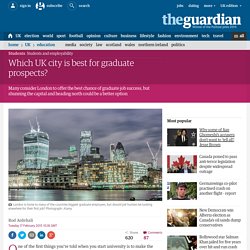 Needless to say, you didn’t take this on board – and now you’re in your final year – trawling through graduate scheme listings in search of your perfect job. Me too. Finding the right scheme is incredibly difficult. International Education News l The PIE News l UK: Unemployment lower for mobile students, IU finds. Differences in unemployment rates and graduate salaries are particularly marked among students who studied STEM subjects– the unemployment rate was 5.2% for mobile students, compared to 6.1% for their non-mobile counterparts. 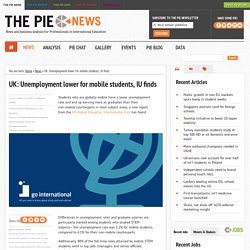 Anne-Marie Graham, Head of Programme, Outward Student Mobility at IU said the report aims to spotlight STEM fields to provide “as much evidence as possible” to demonstrate the positive outcomes of study and work abroad for STEM students. The 10 toughest interview questions. IT skills and past experience of dealing with a difficult colleague are the kinds of things you might expect to be asked about at an interview, but unless you’re planning to go into sports logistics, the number of tennis balls used at Wimbledon is unlikely to be something you’ve research in advance. 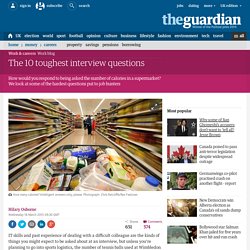 Similarly, detailed knowledge of supermarkets’ product ranges and their calorific value might not be high on your list of revision subjects for an interview at Google. But these are among the things candidates say they have been grilled on at interviews for unrelated jobs. The website Glassdoor has chosen 10 questions which it claims are the 10 toughest asked of UK job-hunters over the past year. The questions were posted on the site by the candidates at the receiving end – only some of whom have explained how they answered. Can you calculate how many tennis balls are used during the course of Wimbledon? A: 54,250, according to the Wimbledon website A: 31.9m according to the industry. Graduate careers: six ways to get a job after university.

1. Decide on a career path and focus all your energy on achieving it Employers don't like vague applications, says Mark Bradford, resourcing specialist at Stem Graduates. "Pick something that most suits your interests, experience and skills. In applications demonstrate your passion and knowledge for that particular path. " Jon Gregory, a university careers adviser, agrees: "Follow your interests and choose an industry that you are enthusiastic about. 2.

Many graduates think their first job will determine their future career path. How to use your disability as a strength when applying for jobs. Dear Employer, I’m James, a mathematics graduate from the University of Bath, who’s not able to do things which most people can. My biggest weaknesses include ...” This is clearly not the best way to kick off a CV or job application, though it’s exactly what I thought I’d be doing when I disclosed my disability applying for a graduate job.

I am clearly not alone. PwC recruiters say A-level results unfairly aid private school pupils. The international accountancy firm PricewaterhouseCoopers (PwC) plans a radical move to ditch A-level results for recruiting graduates because of the unfair advantage given to independent school pupils. PwC, one of the largest recruiters of graduates in the UK, said it would “miss out on key talent from disadvantaged backgrounds” unless it stopped using A-levels and similar exams as part of its graduate recruitment efforts.