Welcome - The Flow of History 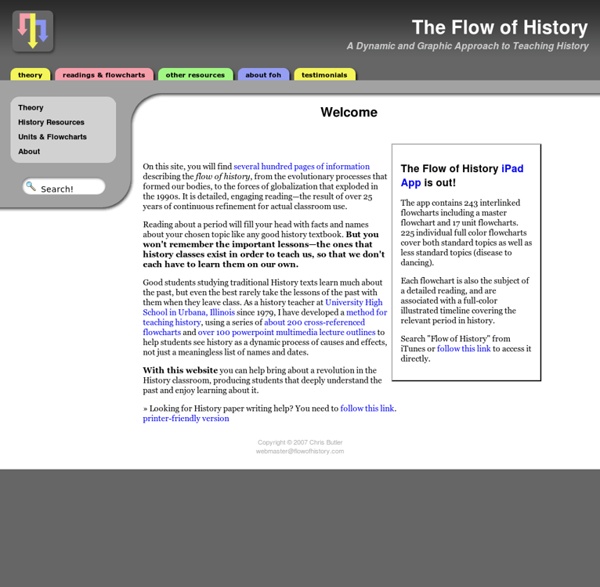 The app contains 243 interlinked flowcharts including a master flowchart and 17 unit flowcharts. 225 individual full color flowcharts cover both standard topics as well as less standard topics (disease to dancing). Each flowchart is also the subject of a detailed reading, and are associated with a full-color illustrated timeline covering the relevant period in history. Search "Flow of History" from iTunes or follow this link to access it directly! On this site, you will find several hundred pages of information describing the flow of history, from the evolutionary processes that formed our bodies, to the forces of globalization that exploded in the 1990s. It is detailed, engaging reading—the result of over 25 years of continuous refinement for actual classroom use. Reading about a period will fill your head with facts and names about your chosen topic like any good history textbook.

Annenberg Media Exhibits: Collapse Hundreds of years ago in what is now modern Honduras, Copán was a thriving civilization, a center of the cultural life of the Maya. Tens of thousands of people made their home in the Copán Valley. Yet despite its importance, Copán went into decline. Across the vast territory of the ancient Maya, other important sites were sharing a similar fate. Classic Maya civilization was collapsing. Map Collections The Library of Congress Search by Keyword | Browse by Geographic Location Index | Subject Index | Creator Index | Title Index The Geography and Map Division of the Library of Congress holds more than 4.5 million items, of which Map Collections represents only a small fraction, those that have been converted to digital form. The focus of Map Collections is Americana and Cartographic Treasures of the Library of Congress. These images were created from maps and atlases and, in general, are restricted to items that are not covered by copyright protection. Map Collections is organized according to seven major categories.

Magna Carta: Cornerstone of the U.S. Constitution At the death of his brother, Richard the Lionhearted, John assumed the throne of England, intent on exercising power to achieve his own selfish ends. To fund military campaigns in France, he extracted exorbitant fees from nobles, who, in turn, raised the rents imposed on their tenants. At the same time, John reduced the lords' customary powers over those tenants, restricting, for example, their power to hold court for those living on their feudal lands. stle Builder Image Copyright 1995 by Educational Management Group, Inc. During the Medieval era of history, life was lived by a very different set of political, economic, and social rules. The only form of government was a Monarchy where the king or queen ruled by "divine right." "Divine right" simply meant that God appointed the king or queen to rule with absolute power. The main economic system was Feudalism in which the king appointed a baron or knight to oversee a portion of his land in return for loyalty and protection in case of invasion. The baron or knight would oversee the serfs who labored on the land in return for protection given by the baron or knight.

A Medieval Mystery This lesson is suitable for KS3 History Unit 19: 'How and why did the Holocaust happen?' and could also be used to support Citizenship at KS3 Unit 4: 'Britain - a diverse society?'. The cartoon depicts the profoundly negative way in which Jews were viewed in 13th century England. Their situation did not improve. In 1290 King Edward I expelled every Jew from England, the first time this had happened anywhere in Europe. Life In The 17th Century By Tim Lambert SOCIETY IN 17th CENTURY ENGLAND During the 17th century the population of England and Wales grew steadily. Women in the 17th Century In the 17th century the professions (lawyer, doctor) were closed to women. However some women had jobs. Some of them worked spinning cloth.

Life In The 18th century By Tim Lambert Society in 18th Century Britain In the late 18th century life the industrial revolution began to transform life in Britain.