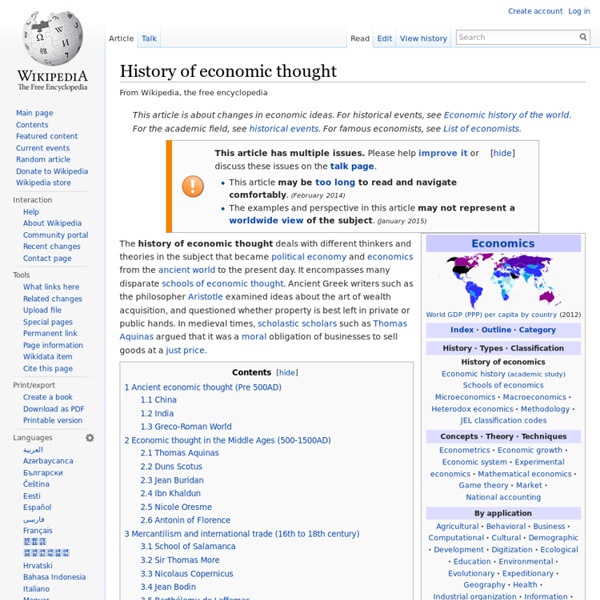 The history of economic thought deals with different thinkers and theories in the subject that became political economy and economics from the ancient world to the present day. It encompasses many disparate schools of economic thought. Ancient Greek writers such as the philosopher Aristotle examined ideas about the art of wealth acquisition, and questioned whether property is best left in private or public hands. In medieval times, scholastic scholars such as Thomas Aquinas argued that it was a moral obligation of businesses to sell goods at a just price. Ancient economic thought (Pre 500AD)[edit] China[edit] Fan Li (also known as Tao Zhu Gong) (517 BC - ),[1] an adviser to King Goujian of Yue, wrote on economic issues and developed a set of 'golden' business rules.[2] India[edit] Chanakya (350 BC - ) wrote the Arthashastra, a treatise on statecraft, economic policy and military strategy. Greco-Roman World[edit] Economic thought in the Middle Ages (500-1500AD)[edit] Thomas Aquinas[edit]

Labour's postwar chancellor makes Corbynomics look Thatcherite – what can he teach us? It’s been a hard slog but three years into the Labour government – the first for more than a decade – the chancellor stands up at a union conference to announce: success. “Income tax and surtax going up to 95p in the pound has meant there are only 70 people in this country today with more than £6,000 they can spend out of income,” he says. New rules on what the rich can claim against tax “will further curtail luxury expenditure, as will the special levy”. The speaker, of course, is not John McDonnell. Labour’s problem then was that Britain had lost its empire and was facing the first of the “balance of payments” crises that would haunt chancellors from then until now. Cripps told the unions he had sliced £580m off income tax payments for the poor, and extended the social wage by £800m – half of it in the form of food subsidies. It is a programme to make Corbynomics look positively Thatcherite by comparison. So what can we do? First, inequality punishes the unlucky.

Introduction to 25G and 40G Ethernet Network - fiber optic solution When you look at the evolution of networking and the data that drives it, there is no surprise that Ethernet has been and will continue to be the most widely used network interface. Consumers and network designers wish to smoothly migrate to higher network speed—100G/400G without compromising quality. Ethernet speed upgrade path was clearly defined as from 10G,40G to 100G. But recently a new migrate path (10G-25G-100G) was gradually accepted by subscribers. For those who need to migrate their network to adopt to the big data age, choose 25G or 40G Ethernet, that is the question! Here Comes 25 Gigabit Ethernet25 Gigabit Ethernet has passed the first hurdle in the IEEE standards body with a successful Call for Interest (CFI) in July, 2014. 40G Ethernet NetworkThe IEEE P802.3ba 40G and 100G Ethernet Task Force was formed to develop a 40 Gigabit Ethernet and 100 Gigabit Ethernet draft standard.

Telecommunications productions: How Optical Switch Is Making a Difference in Optical Networks? We are currently witnessing a strong worldwide trend of bringing fiber closer to individual homes and businesses, which at the same time creates a need for efficient optical-switching mechanisms. There is no doubt that optical switch plays an essential role in telecommunication networks. In this article, we are going to review the optical switching technology that help to improve the bandwidth efficiency, as well as to decrease the cost and power consumption of optical networks. Optical Switching TechnologyAn optical switch is a switch that enables signals in optical fibers or integrated optical circuits (IOCs) to be selectively switched from one circuit to another. Here is how it works, as we know that most networking equipment today is still based on electronic-signals, which means that the optical signals have to be converted to electrical ones, to be amplified, regenerated or switched, and then reconverted to optical signals.

100 years on – Keir Hardie, the politician To commemorate the 100th anniversary of the passing of Labour’s first leader Keir Hardie today, LabourList is publishing a series of Hardie’s writings, introduced by Blair McDougall. When Hardie was blacklisted by mine owners they created in place of Hardie the Miner a tireless trade union organiser and campaigning journalist. He helped organise a series of failed strikes and the bitterness of the experience, and the timidity of the Liberal establishment, made him realise that an industrial strategy wasn’t enough. The miners needed a political voice in Parliament. He spoke to two open air meetings in Ayrshire, at the end of which a motion was agreed. “In the opinion of this meeting, the time has come for the formation of a Labour Party in the House of Commons.” First Speech as a Politician 1887 Irvine Moor The Liberals and Conservatives have, through their organisations, selected candidates. I am not surprised at the action of the Liberal Association in opposing me.

Introduction to HFC (Hybrid Fiber Coax) Access Network - fiber optics HFC is short for Hybrid Fiber/Coax. This network can provide reliable bandwidth for all types of interactive video, data, and voice services. HFC, as an advanced community antenna television (CATV) network, is not hampered by the same copper wire restrictions as ADSL. Traditional cable technology is a one-way broadcast system. The technical challenge of this network is not in getting the throughput but in achieving two-way communication The present article shows how the HFC access network interconnects them, both for user and signaling data. HFC—Definition and Its Working Principle HFC refers to a broadband telecommunication network that combines optical fiber and coaxial cable, which has been utilized globally by cable television operators since the early 1990s. The above image shows HFC distribution system. Next, compared to CATV, HFC network is more reliable, immune to noise and possesses almost non-existent attenuation. Summary HFC improves the quality of TV signal.

Fiberstore Comprehensive FTTx ODN Solutions Growing trends in shared cloud computing and centralized private clouds as well as the increase in the consumer demand for bandwidth are driving business to invest in or expand upon fiber optic networks. FTTx (Fiber to the x), bringing the quadruple-play signal (broadband Internet access, television and telephone with wireless service provisions) from service provider to the subscriber, is an ideal and state-of-the-art solution to use optical fiber economically and effectively. PON (passive optical network) is the major technology used to achieve FTTx. An ordinary PON consists of an optical line terminal (OLT), one or more optical network units (ONUs) or optical network terminals (ONTs), and optical distribution network (ODN), namely the part fibers and splitters between them. In an ODN, many cable assemblies, tools, and devices are required to make sure that the optical network run smoothly. Click the diagram to view the large version. Featured Products

Make Your Network Ready for 40GbE to the Server In today’s server networks, 40GbE has become commonplace and has gradually taken over multiple 10GbE links to each server. Installation of 40GbE devices in the field will be a requirement for customer service and reduced operating costs. So are you ready for embracing 40GbE era? The core of the 40GbE networking, just like the 1GbE or 10GbE networks, is a pair of transceiver modules connected by optical patch cables. A Quick Overview of QSFP Transceiver Modules QSFP is a compact, hot-pluggable transceiver used to plug into network servers, interface cards or switches. DAC and AOC Cabling The standards for 40GbE have been around for more than 2 years, and a number of routers, switches, and network cards have already operated at this speed. 40GbE cabling is also an important segment of upgrading your network. Prospect Summary Believe it or not, the 40 Gigabit Ethernet era is already upon us.

optical fiber: To Push or to Pull, That Is the Question? SAN FRANCISCO – Ford is making a big push to get intimately involved with the daily mobility needs of all motorists, regardless of whether they own a Ford automobile. In April, the automaker will launch a smartphone app called FordPass that helps users with parking and other services, provides live assistants via chat or voice, and offers reward-based programs with partner companies. Although FordPass can be used by anyone, it offers the most benefits to Ford vehicle owners. Ford also will roll out four new FordHubs that, much like interactive kiosks at events such as the North American International Motor Show, opening Monday in Detroit, are designed to showcase the company’s various Ford Smart Mobility initiatives. “We don’t just want to be in the vehicle business, we want to be in the connected relationship business,” Ford CEO Mark Fields told USA TODAY. FordPass is a bold and logical step from Fields. When FordPass launches, users can book and pay for off-street parking in advance.