Master Viinikka Jussi 2014. The Meaning of Emergent Urbanism, after A New Kind of Science. Ecaade2013r 010.content 1. What is Emergent about Emergent Architecture? “The best architectures, requirements, and designs emerge from self-organizing teams.” – Principles behind the Agile Manifesto I follow in the footsteps of so many people who have long wondered at the meanings of such simple words, as though they were dogma from on high. 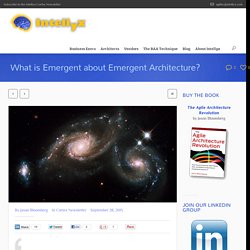 Emerge? Self-organizing? Profound, to be sure. But what do we really make of this sentence? First let me throw water on that whole dogma thing. Instead, what I do really care about is how to help our organizations achieve their goals – especially how to be more agile. The Notion of Emergence Emerges Let’s start with the surprisingly multifaceted definition of the word emergence, and its verb form, to emerge. Perhaps emergent refers to coming into being, as in going from not existing to existing. Or maybe to emerge means to evolve, as in going from a less mature or advanced state to a more mature or advanced state, as opposed to being static. Then perhaps it comes into view, or evolves, or comes into being. 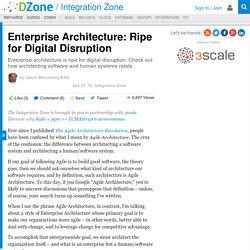 The crux of the confusion: the difference between architecting a software system and architecting a human/software system. If our goal of following Agile is to build good software, the theory goes, then we should ask ourselves what kind of architecture our software requires, and by definition, such architecture is Agile Architecture. To this day, if you Google “Agile Architecture,” you’re likely to uncover discussions that presuppose that definition – unless, of course, your search turns up something I’ve written. When I use the phrase Agile Architecture, in contrast, I’m talking about a style of Enterprise Architecture whose primary goal is to make our organizations more agile – in other words, better able to deal with change, and to leverage change for competitive advantage.

Emergence and Architecting the Enterprise The key to Agile Architecture is emergence. Deep Learning is Teaching Computers New Tricks. A machine-learning technique that has already given computers an eerie ability to recognize speech and categorize images is now creeping into industries ranging from computer security to stock trading. 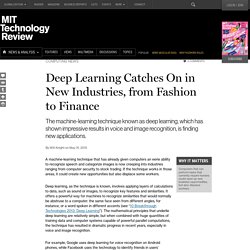 If the technique works in those areas, it could create new opportunities but also displace some workers. Deep learning, as the technique is known, involves applying layers of calculations to data, such as sound or images, to recognize key features and similarities. It offers a powerful way for machines to recognize similarities that would normally be abstruse to a computer: the same face seen from different angles, for instance, or a word spoken in different accents (see “10 Breakthrough Technologies 2013: Deep Learning”). For example, Google uses deep learning for voice recognition on Android phones, while Facebook uses the technology to identify friends in users’ photographs (see “Facebook Creates Software That Matches Faces Almost as Well as You Do”).

M Plummer-Fernandez. WOWGREAT - abelardogfournier: This series of images result... Algorithmic Typography, Crafted Entirely With Computer Code. Even the most serious typographers realize their work is in some ways a means to an end: While individual letters may be beautiful, they exist ultimately to form words. 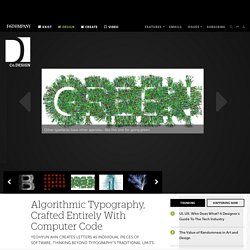 Yeohyun Ahn is a designer who has a different fate in mind for typography. She uses computer code compiled in the visual programming language Processing to algorithmically craft letters as individual pieces of software. The collection of 10 typefaces is called TYPE+CODE II, and it reimagines letters as complex, visually varied creations that, while not quite sentient or interactive, don’t utilize any of the traditional tools in a typical typographer’s arsenal. Titled: Erotic "I would not want to say that using computer code gives me wonderful artistic freedom," Ahn tells Co.Design. As an aside, I asked Ahn how many complete typefaces she had created, rather than one-off letters to demonstrate the different snippets of code. Some of my letters have full alphabet sets from A to Z in TYPE+CODEII, but others don’t have them. Writing & Creative Practice of MARY FLANAGAN.