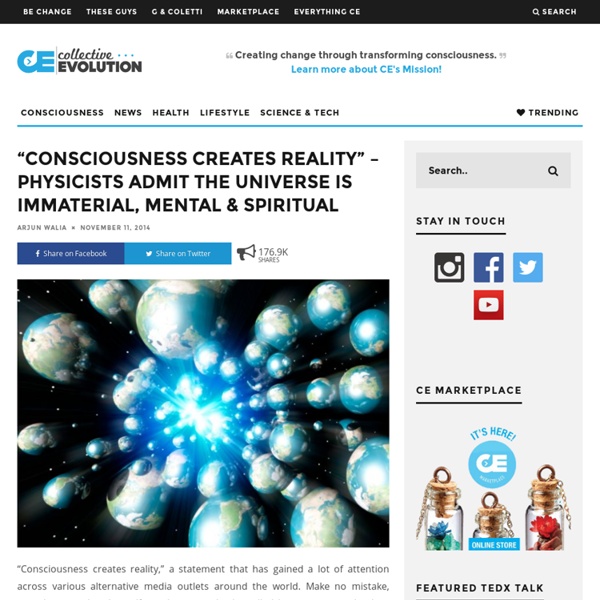 “Consciousness creates reality,” a statement that has gained a lot of attention across various alternative media outlets around the world. Make no mistake, consciousness has been (for quite some time) studied by numerous scientists, especially in its relation to quantum physics and how it might be correlated with the nature of our reality. What is consciousness? Consciousness includes a number of things. It’s how we perceive our world, our thoughts, being aware, our intentions and more. “Looking for consciousness in the brain is like looking in the radio for the announcer.” – Nasseim Haramein, director of research for the Resonance Project“I regard consciousness as fundamental. The statement that “consciousness creates reality” comes with a number of different questions. “A fundamental conclusion of the new physics also acknowledges that the observer creates the reality. The Science Behind The Statement “Consciousness Creates Reality” Buddhist Monks Bless Tea With Good Intention

Curiosity Is as Important as Intelligence - Tomas Chamorro-Premuzic by Tomas Chamorro-Premuzic | 11:00 AM August 27, 2014 There seems to be wide support for the idea that we are living in an “age of complexity”, which implies that the world has never been more intricate. This idea is based on the rapid pace of technological changes, and the vast amount of information that we are generating (the two are related). Yet consider that philosophers like Leibniz (17th century) and Diderot (18th century) were already complaining about information overload. The “horrible mass of books” they referred to may have represented only a tiny portion of what we know today, but much of what we know today will be equally insignificant to future generations. In any event, the relative complexity of different eras is of little matter to the person who is simply struggling to cope with it in everyday life.

New Research Confirms Consciousness Survives the Death of the Body The greatest question of all time may very well be, ‘what happens to us when we die?’ While many, individuals, religions and spiritual traditions have come to their own conclusions about the ever-lasting nature of the soul, it takes a great deal of faith to be certain about the after life. To the scientific mind, this won’t do, and the question looks a little more like, ‘what happens to human consciousness after clinical death?’ A team of researchers at Southampton University in the UK recently conducted one of the largest ever studies about what happens to consciousness after death. The conclusion: We still don’t know what happens, but consciousness and awareness appear to linger for sometime after physical death, suggesting that consciousness and the body are entangled actors somehow, and that may unravel and follow seperate paths after what we refer to as death. “The evidence thus far suggests that in the first few minutes after death, consciousness is not annihilated.

Understanding Borderline Personality Disorder Definition - Borderline Personality Disorder is a defined as a serious mental illness characterized by pervasive instability in moods, interpersonal relationships, self-image, and behavior. The instability of BPD often disrupts family and work life, long-term planning, and the individual's sense of self-identity. Originally thought to be at the "borderline" of psychosis, people with BPD suffer from a disorder of emotion regulation. While less well known than schizophrenia or bipolar disorder (manic-depressive illness), BPD is more common, affecting 2% of adults, mostly young women or by another estimate, 1-3% of the general population. Some suggest that the name itself, Borderline Personality Disorder, is an inappropriate term for this disorder, or "a misleading label". The disorder has nothing to do with neurosis or psychosis, but rather involves emotional volatility, what one reporter described as "a [very] thin emotional skin".

The future is here at Design Museum / toothpicnations Main and bottom left: The future is here exhibition designed by by Lucienne Roberts+ and drMM; Bottom right: KUKA Robotics' AGILUS robots Work has kept me quite busy lately, but I finally managed to visit "The future is here: a new industrial revolution" exhibition at the Design Museum on its last day at the last hours! We have all witnessed the industrial revolution ( I mean at the 2012 Olympics Opening ceremony directed by Danny Boyle), and this exhibition focused on the possibility of a new one based on the past, current industry trends and technology. Switch in nerve pain medication: Pregabalin to Gabapentin - Recovering from Surgery Hi all, as some may know I underwent an L4 / S1 PLIF in February this year, and have been making progress in my recovery over the last several months and beginning a phased return to work. I have recently been discharged by my surgeon who was very happy with my progress, but suspect the discharge was more so because my insurer closed my case as their policy dictates having undergone surgery that after 5 months I should have recovered, or else I must be suffering a chronic condition which they don't cover! I am now under my GP's care, although I can always get referred back to my surgeon should the need arise. I have been taking Pregabalin since 4 weeks post op, to combat my nerve pain which if anything has gotten worse as I have pushed my recovery and return to work etc.

I thought I was damaged. Then I learned I’m introverted. Not long ago, I discovered Michael Schiller’s terrific Social Introverts Facebook Fan Page. We started corresponding, and I’d love to share the note he sent me about his passion for helping introverts appreciate their own quiet perfection. ~ Susan Click image to "Like" Michael Schiller's "Social Introverts" FB Fan Page Hello, Susan. How Marianne Williamson advocates for mindful activism In this election season, a yoga studio is encouraging patrons to get off the mat and into citizen activism. On Saturday, Wanderlust Hollywood is hosting "Mindful America: Creating a Mindful Policy For a Healthy, Prosperous America." The six experts on the panel will pose answers to a provocative question: How can the personal practices of mindful living — living sustainably, buying organically and cultivating personal spirituality — be applied to public issues such as healthcare, energy and incarceration? Spiritual teacher and author Marianne Williamson will join the panel, which also includes Los Angeles yoga teacher and activist Seane Corn, Make Smart Cool founder Prince Ea, CTZNWELL founder Kerri Kelly, Revolve Impact founder Mike de la Rocha and Rep. Tim Ryan (D-Ohio), a meditation advocate and author of "A Mindful Nation: How a Simple Practice Can Help Us Reduce Stress, Improve Performance, and Recapture the American Spirit."

23 Signs You’re Secretly a Narcissist Masquerading as a Sensitive Introvert The views expressed are those of the author and are not necessarily those of Scientific American. If I see one more listicle about introversion, I’m going to cry. It started out with the fairly reasonable “31 Unmistakable Signs That You’re An Introvert.” Sure, many of the items on the list offered an exaggerated version of introversion, but there were some real gems that had a large grain of truth.

Related:
Related:  mind fuck   -  WAKE UP!   -  trainerchick71   -  4 Thought   -  Wake On LAN   -  Mind and Thought   -  wake up-call app questions sets   -  wake up   -  The Size Of Our World   -  The Gnostic World View: A Brief Summary of Gnosticism   -  Reading Marx's Capital with David Harvey   -  Steven Pinker: What our language habits reveal | Video on TED.com   -  William James - Wikipedia, the free encyclopedia   -  Mistakes Introverts Make | Psychology Today   -   | The Happy Movie   -  Buddhism and the Brain § SEEDMAGAZINE.COM   -  Stuff No One Told Me   -  A Lesson on Forgiveness - Global One TV: Multimedia for Mystics   -  loneatheist.com   -  Twelve Virtues of Rationality by Eliezer Yudkowsky   -  Artige bilder   -  Idea Mapping   -  6 Ways That Food Is Being Used as a Weapon Against Us | Wake Up World   -  Café Communications -- Deadlines - YouTube   -  Best of   -  Global Financial Crisis: A World in Debt   -  Watch Free Top Documentaries Online - Watch Documentary TV   -  Jared Ficklin: New ways to see music (with color! and fire!) | Video on TED.com   -  Neil Harbisson: I listen to color | Video on TED.com   -  Eliminative materialism - Wikipedia, the free encyclopedia   -  Space: Thinkfinity Resources | Thinkfinity   -  Tristram Stuart: The global food waste scandal | Video on TED.com   -  Andrew Blum: What is the Internet, really? | Video on TED.com   -  Home   -  8 Types Of Imagination   -  The Science of Productivity   -  An Interactive Guide To The Fourier Transform   -  How to Think Like Sherlock Holmes: Lessons in Mindfulness and Creativity from the Great Detective | Brain Pickings   -  The 150 Things the World's Smartest People Are Afraid Of | Motherboard   -  Psychedelics Can Expand Your Consciousness | Collective-Evolution   -  Too Oddities » Exit stage right, End of set