Buddhism and the Brain 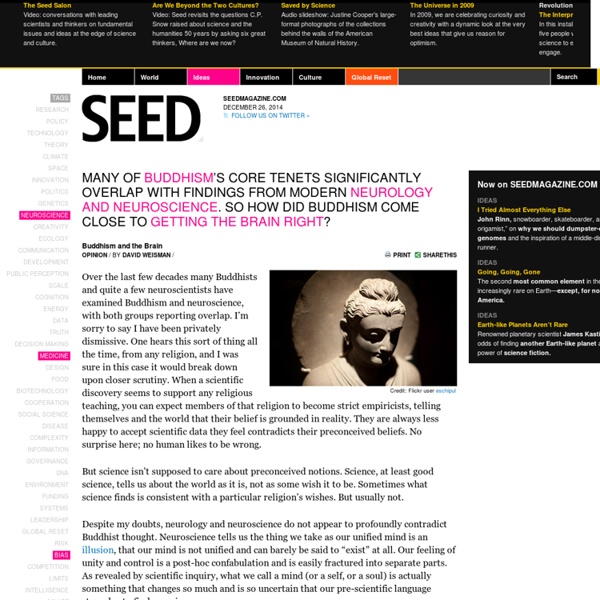 Credit: Flickr user eschipul Over the last few decades many Buddhists and quite a few neuroscientists have examined Buddhism and neuroscience, with both groups reporting overlap. I’m sorry to say I have been privately dismissive. One hears this sort of thing all the time, from any religion, and I was sure in this case it would break down upon closer scrutiny. When a scientific discovery seems to support any religious teaching, you can expect members of that religion to become strict empiricists, telling themselves and the world that their belief is grounded in reality. They are always less happy to accept scientific data they feel contradicts their preconceived beliefs. But science isn’t supposed to care about preconceived notions. Despite my doubts, neurology and neuroscience do not appear to profoundly contradict Buddhist thought. Buddhists say pretty much the same thing. Mr. Although I despaired, I comforted myself by looking at the overlying cortex. The next day Mr.

10% of the Brain Myth Let me state this very clearly: There is no scientific evidence to suggest that we use only 10% of our brains. Let's look at the possible origins of this "10% brain use" statement and the evidence that we use all of our brain. Where Did the 10% Myth Begin? The 10% statement may have been started with a misquote of Albert Einstein or the misinterpretation of the work of Pierre Flourens in the 1800s. It may have been William James who wrote in 1908: "We are making use of only a small part of our possible mental and physical resources" (from The Energies of Men, p. 12). How Dumb Thinking Leads to "Uh Oh" Moments Ever been wrong? Forced into damage control? Feel stupid after-the-fact? Here's quite possibly why. : A statement or claim that can be objectively verified or proven.

Religion Pantheon List of Gods Roman PaganismThe religion of Rome If anything, the Romans had a practical attitude to religion, as to most things, which perhaps explains why they themselves had difficulty in taking to the idea of a single, all-seeing, all-powerful god. Buddhism Vs. Neuroscience Long before my interest in Buddhism, I was fascinated by how our brains work, how thoughts arise, how consciousness works, and where this feeling of self comes from. In my opinion, going back to childhood, I’ve never seen the brain and body as separate, but instead two integrated systems. My interest in neuroscience was partly why I found Buddhism so intriguing. I was fascinated by how Buddha broke down and separated thoughts and emotions, awareness and consciousness. I heartily disagreed with him that I wasn’t my thoughts or opinions.

9 Mindfulness Rituals to Make Your Day Better “Smile, breathe and go slowly.” - Thich Nhat Hanh, Zen Buddhist monk Post written by Leo Babauta. Are you simply moving through your day, without fully living? I did this for many years. It was as if life were just passing by, and I was waiting for something to happen. I always felt like I was preparing for something later. Online papers on consciousness Search tips There are three kinds of search you can perform: All fields Lucid Dreaming By lucid dreaming, you can gain complete control over the one place that no one will ever care about: your imagination. Just The Facts Lucid dreaming is a scientifically proven phenomenon. While some get into lucid dreaming in order to treat chronic nightmares, or to experience all facets of the human experience, approximately 99.8% of people use it as a tool for cheap and interactive 3D porn.

Jainism Jainism (/ˈdʒeɪnɪzəm/[1] or /ˈdʒaɪnɪzəm/[2]), traditionally known as Jin Sashana or Jain dharma (Sanskrit: जैन धर्म), is an Indian religion that prescribes a path of nonviolence (ahimsa) towards all living beings. Practitioners believe that nonviolence and self-control are the means by which they can obtain liberation. The three main principles of Jainism are non-violence (ahimsa), non-absolutism (anekantavada) and non-possessiveness (aparigraha). Followers of Jainism take 5 major vows: non-violence, non-lying, non-stealing, chastity, and non-attachment.

This is Your Brain on Buddha, by Erik Davis Anyone studying the mind will soon stumble across a fundamental tension between first-person and third-person accounts of cognition. On the one hand, you have three pounds of gray matter flowering on top of a post-simian spine -- meat that can be mapped, poked, drugged, and registered. On the other hand, you have your own internal flow of impressions, thoughts, sensations, and memories, a stream of consciousness that includes thoughts like "the stream of consciousness is an illusion." How can we integrate these two worlds? And is it even a good idea? Celebrated neuro-thinkers like Daniel Dennett and Paul and Patricia Churchland are reluctant to give the "inside" of awareness or experience much explanatory weight, insisting that objective accounts of consciousness are far superior if you want to understand how the mind actually works.

The Research and Science Behind a Perfect Blog Post Phew! Talk about pressure. Writing a blog post about how to write a perfect blog post is the most meta of burdens. It’s a bit different than writing about perfect tweets or ideal Facebook posts. There’s nowhere to hide when you’re blogging about perfect blogging. The Experience and Perception of Time What is ‘the perception of time’? The very expression ‘the perception of time’ invites objection. Insofar as time is something different from events, we do not perceive time as such, but changes or events in time. But, arguably, we do not perceive events only, but also their temporal relations. Religion in ancient Rome The religion of Ancient Rome was polytheistic in origin, in line with religious traditions in wider Iron Age Europe. From an early time, however, the Roman Republic was strongly influenced by Hellenistic Greece, and much of the recorded religion of pre-Christian Rome is a syncretism of indigenous with Hellenistic religion. Roman religion was thus practical and contractual, based on the principle of do ut des, "I give that you might give." Religion depended on knowledge and the correct practice of prayer, ritual, and sacrifice, not on faith or dogma, although Latin literature preserves learned speculation on the nature of the divine and its relation to human affairs. Even the most skeptical among Rome's intellectual elite such as Cicero, who was an augur, saw religion as a source of social order.

Buddhism and science: Talking past each other? - The Philosopher's Zone Alan Saunders: Hi, I’m Alan Saunders, and this week on The Philosopher’s Zone we look at the convergence, or perhaps not, of two philosophies: Buddhism and modern science. Buddhism has attempted lately to redefine itself in relation to neuroscience. A case in point is the dialogue between Buddhism and neuroscience promoted by the Dalai Lama and his western followers. To look at how this dialogue has been conducted, I’m joined by Professor Bernard Faure, who holds the Kao chair in Japanese religion at Columbia University, where he’s also Director of the Columbia Center for Japanese Religion. Bernard Faure, welcome to The Philosopher’s Zone. Bernard Faure: Thank you for having me.