The Gnostic World View: A Brief Summary of Gnosticism 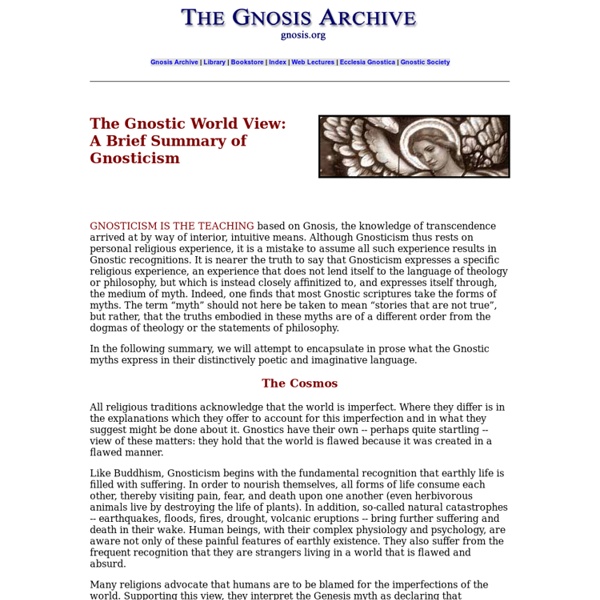 Gnosis Archive | Library | Bookstore | Index | Web Lectures | Ecclesia Gnostica | Gnostic Society GNOSTICISM IS THE TEACHING based on Gnosis, the knowledge of transcendence arrived at by way of interior, intuitive means. Although Gnosticism thus rests on personal religious experience, it is a mistake to assume all such experience results in Gnostic recognitions. It is nearer the truth to say that Gnosticism expresses a specific religious experience, an experience that does not lend itself to the language of theology or philosophy, but which is instead closely affinitized to, and expresses itself through, the medium of myth. Indeed, one finds that most Gnostic scriptures take the forms of myths. In the following summary, we will attempt to encapsulate in prose what the Gnostic myths express in their distinctively poetic and imaginative language. The Cosmos All religious traditions acknowledge that the world is imperfect. Deity The Human Being Salvation Conduct Destiny Conclusion + Stephan A.

A complete version of The Gospel of Mary Magdalene - National Gnosticism & Heretical Spirituality Mary Magdalene has perennially intrigued western culture, yet her interest has peaked in the last generation because of the parallel interest in the Gnostic Gospels. No longer just a redeemed sinner or sensuous projection for artists, Gnosticism revealed a Mary Magdalene who was a spiritual visionary, a religious leader, and perhaps the main disciple of the risen Christ. In the Nag Hammadi library’s Dialogue with of Savior, she is proclaimed as “the woman who understood The All.” The most popular narration of Mary Magdalene today is the Gospel of Mary (even though its discovery is well over a century old). In this scripture, Mary shares in a mystic vision with Jesus concerning the infinite domains. She moreover comforts and leads the other apostles, although not without conflict. In The Pre-Nicene New Testament, Robert M. Price summarizes Mary’s role this scripture as “a symbolic figurehead for Gnostic and other sects who claimed her as their authorization.

Early Christianity Early Christianity is the period of Christianity preceding the First Council of Nicaea in 325. It is typically divided into the Apostolic Age and the Ante-Nicene Period (from the Apostolic Age until Nicea). History[edit] During the Ante-Nicene period following the Apostolic Age, a great diversity of views emerged simultaneously with strong unifying characteristics lacking in the apostolic period. According to Will Durant, the Christian Church prevailed over Paganism because it offered a much more attractive doctrine and because the church leaders addressed human needs better than their rivals.[8] Practices[edit] From the writings of early Christians, historians have tried to piece together an understanding of various early Christian practices including worship services, customs and observances. Baptism[edit] Early Christian beliefs regarding baptism probably predate the New Testament writings. The 3rd century evidence is clearer, with both Origen[14] and Cyprian advocating the practice.

Early Christian Writings: New Testament, Apocrypha, Gnostics, Ch Heinrich Cornelius Agrippa Life[edit] Agrippa was born in Cologne on 15 September 1486. In 1512, he taught at the University of Dole in the Free County of Burgundy, lecturing on Johann Reuchlin's De verbo mirifico; as a result, Agrippa was denounced, behind his back, as a "Judaizing heretic". Agrippa's vitriolic response many months later did not endear him to the University. In 1510, Agrippa studied briefly with Johannes Trithemius, and Agrippa sent him an early draft of his masterpiece, De occulta philosophia libri tres, a kind of summa of early modern occult thought. During his wandering life in Germany, France, and Italy, Agrippa worked as a theologian, physician, legal expert, and soldier. No evidence exists that Agrippa was seriously accused, much less persecuted, for his interest in or practice of magical or occult arts during his lifetime, apart from losing several positions. In the Third Book of Occult Philosophy, Agrippa concludes with:[2] Works[edit] Woodcut print portrait of Agrippa See also[edit]

Christ in Egypt by Richard Harty May 2, 2009 from WhatIsSpiritual Website The book “Christ In Egypt - The Horus-Jesus Connection” is as much a story of Christianity as the New Testament. It is a story of the evolution of religious belief , beginning in Egypt, that continues today. D.M. She describes the nature of how this story is told. In many ways this book reads like a detective novel. The transformation of Egyptian religious belief is as much a syncretism of various gods and goddesses as is Christianity. There is evidence that the Egyptians were essentially monotheists and saw the various gods as simply one aspect of the great unknown creator god. An example of this is a Horus-Seth united in a single being from the Amduat. This mode of religious expression is very foreign to the Christian believer who has been taught that God does not change. Yet, even within the last 100-200 years we see various forms of Christianity being combined with modern ideas rather freely. D.M. "St. Cyprian also writes, D.M.