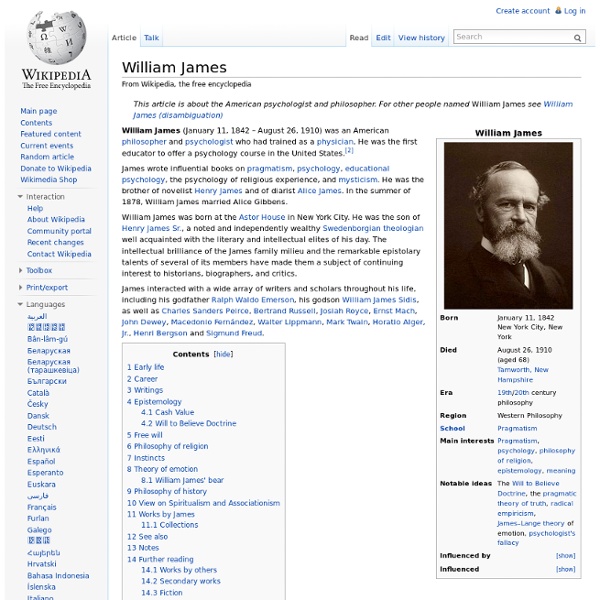 William James (January 11, 1842 – August 26, 1910) was an American philosopher and psychologist who was also trained as a physician. The first educator to offer a psychology course in the United States,[2] James was one of the leading thinkers of the late nineteenth century and is believed by many to be one of the most influential philosophers the United States has ever produced, while others have labelled him the "Father of American psychology".[3][4][5] Along with Charles Sanders Peirce and John Dewey, he is considered to be one of the greatest figures associated with the philosophical school known as pragmatism, and is also cited as one of the founders of the functional psychology. He also developed the philosophical perspective known as radical empiricism. Born into a wealthy family, James was the son of the Swedenborgian theologian Henry James Sr and the brother of both the prominent novelist Henry James, and the diarist Alice James. Early life[edit] Career[edit] Writings[edit]

Creative Evolution (book) Creative Evolution (French: L'Évolution créatrice) is a 1907 book by French philosopher Henri Bergson. Its English translation appeared in 1911. The book provides an alternate explanation for Darwin's mechanism of evolution, suggesting that evolution is motivated by an élan vital, a "vital impetus" that can also be understood as humanity's natural creative impulse. The book was very popular in the early decades of the twentieth century, before the Neodarwinian synthesis was developed.[citation needed] Harvard philosopher William James intended to write the introduction to the English translation of the book, but died in 1910 prior to its completion. Henri Bergson, Creative Evolution (1911) tr. Emergent evolution

PHILOSOPHY AND THE SCIENTIFIC IMAGE OF MAN Wilfrid Sellars Published in Frontiers of Science and Philosophy, edited by Robert Colodny (Pittsburgh: University of Pittsburgh Press, 1962): 35-78. Reprinted in Science, Perception and Reality (1963). The aim of philosophy, abstractly formulated, is to understand how things in the broadest possible sense of the term hang together in the broadest possible sense of the term. Under 'things in the broadest possible sense' I include such radically different items as not only 'cabbages and kings', but numbers and duties, possibilities and finger snaps, aesthetic experience and death. To achieve success in philosophy would be, to use a contemporary turn of phrase, to 'know one's way around' with respect to all these things, not in that unreflective way in which the centipede of the story knew its way around before it faced the question, 'how do I walk?' Knowing one's way around is, to use a current distinction, a form of 'knowing how' as contrasted with 'knowing that'.

Theodosius Dobzhansky Theodosius Grygorovych Dobzhansky ForMemRS[1] (Ukrainian: Теодосій Григорович Добжанський; January 24, 1900 – December 18, 1975) was a prominent geneticist and evolutionary biologist, and a central figure in the field of evolutionary biology for his work in shaping the unifying modern evolutionary synthesis.[2] Dobzhansky was born in Ukraine and emigrated to the United States as a young man in 1927. He published a major work of the modern evolutionary synthesis, Genetics and the Origin of Species, in 1937. He was awarded the National Medal of Science in 1964,[3] and the Franklin Medal in 1973. Biography[edit] Early life[edit] Dobzhansky was born on January 24, 1900 in Nemyriv, Ukraine. On August 8, 1924, Dobzhansky married geneticist Natalia "Natasha" Sivertzeva who was working with I. Before moving to the USA, Dobzhansky published 35 scientific works on entomology, genetics and zootechnique. America[edit] In 1970, he published Genetics of the evolutionary process.[9] Religious beliefs[edit]

Transhumanist Values 1. What is Transhumanism?Transhumanism is a loosely defined movement that has developed gradually over the past two decades.[1] It promotes an interdisciplinary approach to understanding and evaluating the opportunities for enhancing the human condition and the human organism opened up by the advancement of technology. Attention is given to both present technologies, like genetic engineering and information technology, and anticipated future ones, such as molecular nanotechnology and artificial intelligence.The enhancement options being discussed include radical extension of human health-span, eradication of disease, elimination of unnecessary suffering, and augmentation of human intellectual, physical, and emotional capacities. Other transhumanist themes include space colonization and the possibility of creating superintelligent machines, along with other potential developments that could profoundly alter the human condition.

Books by Jean Klein DIALOGUES BETWEEN JEAN KLEIN and his students and friends, during recent seminars in the United States and Europe, form the text of this illuminating book. In many different settings and circumstances, Jean Klein casts and re-casts the teaching of Advaita, addressing each individual in his or her own uniqueness, while at the same time demonstrating the oneness of being. These far-reaching exchanges - exploring almost every aspect of self-knowledge - show that it is only through living fully in "not knowing" that we can awaken to our real nature: the "I AM" of pure consciousness. In addition, Jean Klein discusses for the first time his early life, his meetings with his teacher in India, and the moment of his awakening. The result is an inspiring prologue that not only gives us an intimate look at this remarkable teacher and the discoveries he made in his search for truth, but also makes clear the immediate accessibility of these discoveries to every earnest seeker.

Andy Clark General themes in Clark's work[edit] Clark’s work explores a number of disparate but interrelated themes. Many of these themes run against established wisdom in cognitive processing and representation. According to traditional computational accounts, the function of the mind is understood as the process of creating, storing and updating internal representations of the world, on the basis of which other processes and actions may take place. The Extended Mind[edit] Clark is perhaps most well known for his defence of the hypothesis of the extended mind. Clark concedes that, in practice, the criterion of "equal efficiency"[citation needed] required by the parity principle is seldom met. Clark foresees the development of cognitive prosthetics, or "electronic brain enhancements" ("EBEs"), as only[citation needed] the next logical step in the human mind’s natural integration with technology. Bibliography[edit] Books by Andy Clark: Clark is also on the editorial boards of the following journals:

Walden III: In Search of a Utopian Nirvana (9780967036267): Stephen Wolinsky Human enhancement and the future of work report 07 November 2012 The Human enhancement and the future of work project explored potential enhancements arising from advances in science and engineering that are likely to impact on the future of work. Key messages identified by participants at a workshop in March 2012 included: Enhancement technologies could change how people work. Work will evolve over the next decade, with enhancement technologies potentially making a significant contribution. Widespread use of enhancements might influence an individual’s ability to learn or perform tasks and perhaps even to enter a profession; influence motivation; enable people to work in more extreme conditions or into old age, reduce work-related illness; or facilitate earlier return to work after illness. The report of the workshop is a record of the discussion that took place at the event, and does not necessarily reflect the policy of the academies.

Donna Fenn | Upstarts! | Books 25.00 | Hardcover | September 2009 McGraw-HIll How GenY Entrepreneurs are Rocking the World of Business and 8 Ways You Can Profit from Their Success Generation Y is starting companies at an unprecedented rate, and their approach to business is unlike anything you’ve seen. Inc. magazine contributing editor Donna Fenn interviewed more than 150 young CEOs to learn what makes them tick. Upstarts! The sooner you adapt to the new way of business, the greater chance you have to grow and profit in the years ahead. Building collaborative tribesDeploying technology for competitive advantageDisrupting the status quoDeconstructing the GenY marketGenerating branding buzzLeveraging social missionCreating dynamic workplaces Morphing and growing strategically Misreading GenY companies could be the biggest business mistake you ever make.

Man climbs skyscraper with bionic leg - Technology & Science The metal on Zac Vawter's bionic leg gleamed as he climbed 103 floors of Chicago's iconic Willis Tower, becoming the first person ever to complete the task wearing a mind-controlled prosthetic limb. The Willis Tower, formerly the Sears tower, was once the tallest building in America. (Charles Rex Arbogast/Associated Press) Vawter, who lost his right leg in a motorcycle accident, put the smart limb on public display for the first time during an annual stair-climbing charity event called "SkyRise Chicago" hosted by the Rehabilitation Institute of Chicago, where he is receiving treatment. "Everything went great," said Vawter at the event's end. The robotic leg is designed to respond to electrical impulses from muscles in his hamstring. The computerized prosthetic limb, like something one might see in a sci-fi film, weighs about 10 pounds and holds two motors. This event was a research project for us, said Joanne Smith, the Rehabilitation Institute's CEO.

Mobs, Messiahs, and Markets, Agora Series, William Bonner, (9780470112328) Hardcover - Barnes & Noble Not worth the price This book contains some obvious truths which should be self-evident to anyone with half a brain. However since some folks follow the mob, perhaps they need telling again. Trouble is the style is pompous, over-stated, and patronising, and leaves you feeling the authors are trying to impress with words to make up for the absence of real content. I would not recommend it. Was this review helpful? Eternal Reoccurrence vs. Finite Progress « Codex Sarepticus How repetitious is history? — Human Consciousness of Change and Persistence — The Age of Darkness before the Myths of Creation — Fandom Cults of the Academia — Origins of the Wheels of Reoccurrence — Whither be thou, O Sweet Progress? (Now with fixed footnotes. One of the major themes in my Weltanschauung that shows up in my novels, nonfiction, and others nuances, is the concept of historical reoccurrence: the notion that history repeats itself. What’s interesting is that, our own mass awareness of this notion — that history repeats itself — is a mutually shared understanding, crossing cultures, classes, nations, ages[1], and eras. Now before moving onto what I think is interesting in the above paragraph[3], I’d like to identify a few types of reoccurrence[4]. The reoccurrence wisdom that concerns us as individuals carrying out our daily lives on a micro scale. Two concepts of time– Linear and Cyclical Conceptions of linear and cyclical time coexist in all societies and civilizations.