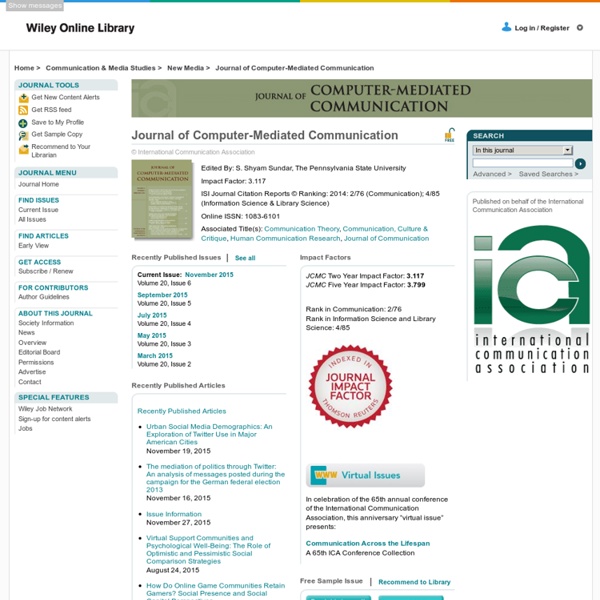 How many friends do you have? « Paola Tubaro's Blog Pollet, T., Roberts, S., & Dunbar, R. (2011). Use of Social Network Sites and Instant Messaging Does Not Lead to Increased Offline Social Network Size, or to Emotionally Closer Relationships with Offline Network Members Cyberpsychology, Behavior, and Social Networking, 14 (4), 253-258 DOI: 10.1089/cyber.2010.0161 I recently happened to read this new article (access here). Its main interest is that it is part of two broader debates on, respectively, the size of personal networks and the impact of online communication on socialisation. Let us first start with the size of personal networks. A milestone in this debate is the so-called “Dunbar’s number“, based on a 1992 study of one of the co-authors of the above mentioned article. Virtual World Environments Current practice in Higher Education is moving away from didactic content delivery, the transfer of discrete, abstract, decontextualised concepts (Goodyear, 2002; Seely-Brown et. al., 1995), towards constructionist, student-centred models with increasing emphasis on the skills that support independent, self-motivated learning. This trend, reported on at length by the influential Tavistock report (Cullen et al, 2002) is increasingly facilitated by use of virtual learning environments (VLEs) such as WebCT (WebCT)or Moodle (Moodle). Initially used as little more than document delivery and distance learning tools, VLEs are increasingly being used to support collaborative learning by providing areas where students can comment, contribute and share their learning (Mason, 1998).

SketchCrawl SketchCrawl is a little experiment I did on Saturday August 14th. The Idea: Sketch irrevocabily for a whole day out in the city (San Francisco). Recording all I could of what I did and saw . A marathon of drawing. The day was a blast ... here are the 19 pages of drawing I filled. want to read more about how SketchCrawl came to be? Laiki agora A market in Heraklion, Crete, famous for its tourism. Some of the fresh produce that can be identified in this photo include: Tomatoes, lettuce, spinach, bananas, cherries, watermelons, melons, red and yellow apples, cucumbers, garlic, apricots, grapes, lemons, pears, beans, strange fruits, peaches Laiki agora (λαϊκή αγορά, Greek for people's market), also common in the plural Laikes agores (λαϊκές αγορές, people's markets), are street markets that operate all over Greece, selling foodstuffs and gardening or household equipment, as well as children toys and various "do it yourself" tools. It is considered an important social custom and tradition in Greece.

9 Wrong And 8 Right Ways Students Should Use Technology Technology is a tool. It’s not a learning outcome. Too often do we get distracted by all the activities and action we can perform with an iPad or some other device. We can post to Edmodo! Make a Prezi! Post to Facebook!

Bridging the Generational Tech Gap - Great Colleges to Work For 2011 By David D. Perlmutter Over the last two years, our department of journalism and mass communication has hired five new tenure-track faculty members. In reviewing the current job market, I pointed out to our doctoral students that despite our new colleagues' varied interests, research methods, and pedigrees, they have the following in common: an already burgeoning publication record, even though four of them are or were recent doctoral students; participation in the grant-making process; and a reputation as virtuosos of new and emerging communications technologies in research and teaching. One of them, a job candidate at the time, came and presented to our faculty a summary of her study of social-network patterns in elections in Kenya. I was awed.

Multimedia and student activity - a study using VideoSearch Jan Herrington and Ken KnibbEdith Cowan University The allocation of time to different student activities in formal university settings, has been a subject of interest to researchers in recent years. As part of an interpretive study into how students use interactive multimedia, small groups of students were videotaped using an interactive multimedia program based upon a framework of situated learning. 1911 - DESIGN YOUR OWN ANTI-PROCRASTINATION PLAN Skip navigation links ugs : life and learning in sync Sanger Learning Center is UT Austin’s main resource for academic support. Each year, we help more than 20,000 students achieve their academic potential. We are open Monday through Friday, 8 a.m.-5 p.m. Amazon and the reintermediation of the spectacle There’s an archetypal narrative of the web that starts with the word disintermediation. Which is the posh way of saying cutting out the supply chain middle men. It’s usually accompanied by a picture showing before: and after: The perenial poster child for the promise of disintermediation is Dell; cutting out the distributors and retailers to go direct to consumers with their marvelous black boxes of technology. Like most other things in the realm of new technology people tend to take this picture and extrapolate.

Form Subdivisions Form Subdivisions While items in this list normally function as form subdivisions, most of them may also function as topical subdivisions depending on whether the item itself is in that format, or whether it discusses that format. (Current with 14th ed. of "Free-floating subdivisions : an alphabetical index") 2-harpsichord scores 2-piano scores 3-piano scores social-media-propaganda-posters from mymodernmet.com Etsy merchant Justonescarf from Feeding Hills, Massachusetts has made some pretty awesome social media propaganda posters that will make you think twice about which sites you spend the most time on. Are you always going back and forth between Facebook and Twitter? Have you started to use Google +? Who will win out in the social media war? It seems like it's still anyone's game.. Justonescarf on Etsy