What concepts do not exist in the English language? 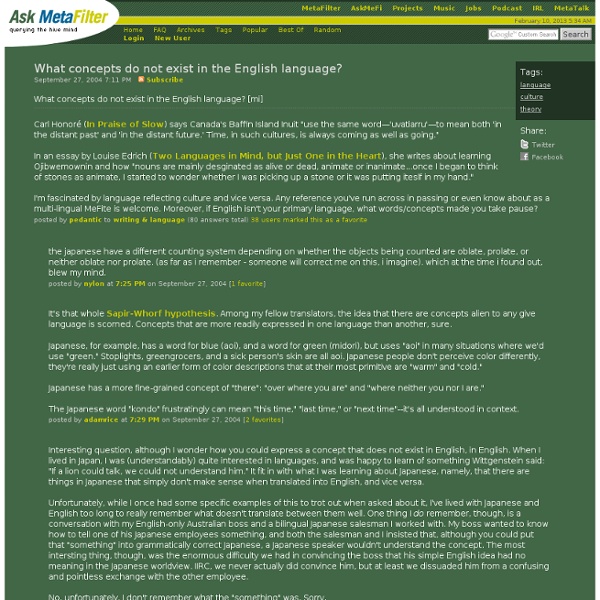 Carl Honoré (In Praise of Slow) says Canada's Baffin Island Inuit "use the same word—'uvatiarru'—to mean both 'in the distant past' and 'in the distant future.' Time, in such cultures, is always coming as well as going." In an essay by Louise Edrich (Two Languages in Mind, but Just One in the Heart), she writes about learning Ojibwemownin and how "nouns are mainly desginated as alive or dead, animate or inanimate...once I began to think of stones as animate, I started to wonder whether I was picking up a stone or it was putting iteslf in my hand." I'm fascinated by language reflecting culture and vice versa. Related:  Linguistics

The Phrontistery: Obscure Words and Vocabulary Resources Why does fall/autumn have 2 names? Ambivalence over the name of the third season of the year reflects its status as a relatively new concept. As natural as it seems today, people haven't always thought of the year in terms of four seasons. Fifteen hundred years ago, the Anglo-Saxons marked the passage of time with just one season: winter, a concept considered equivalent to hardship or adversity that metaphorically represented the year in its entirety. For example, in the Old English epic poem "Beowulf," the title character rescues a kingdom that had been terrorized by a monster for "12 winters." According to "Folk Taxonomies in Early English" (Fairleigh Dickinson University Press, 2003) by Earl R. Summer is also a time-honored concept, though perhaps never quite as weighty a one as winter, and this is evidenced by greater ambivalence over its name. In the West, the transitional seasons, being more trivial, were "not fully lexicalized in the language" until much later, Anderson wrote. Related on Life's Little Mysteries:

The Awful German Language by Mark Twain A little learning makes the whole world kin. -- Proverbs xxxii, 7. I went often to look at the collection of curiosities in Heidelberg Castle, and one day I surprised the keeper of it with my German. I spoke entirely in that language. If he had known what it had cost me to acquire my art, he would also have known that it would break any collector to buy it. Surely there is not another language that is so slipshod and systemless, and so slippery and elusive to the grasp. N. There are ten parts of speech, and they are all troublesome. Yet even the German books are not entirely free from attacks of the Parenthesis distemper -- though they are usually so mild as to cover only a few lines, and therefore when you at last get down to the verb it carries some meaning to your mind because you are able to remember a good deal of what has gone before. 1. That is from The Old Mamselle's Secret, by Mrs. However, it is not well to dwell too much on the separable verbs. "Gretchen. Wilhelm.

“Daniel” In Japanese :: japanesetranslator.co.uk In Japanese, foreign names are normally written using the phonetic katakana alphabet. To see what your name looks like in Japanese, just type it in below and click the “Translate” button. If you like, you can also choose from a few different character styles. Notes This dictionary does not contain Japanese names. Using the Images The images produced by this dictionary are free for personal use. Problems? If you're seeing an error image where your name should be, then maybe your browser isn't working properly. Software Translates Your Voice into Another Language Researchers at Microsoft have made software that can learn the sound of your voice, and then use it to speak a language that you don’t. The system could be used to make language tutoring software more personal, or to make tools for travelers. In a demonstration at Microsoft’s Redmond, Washington, campus on Tuesday, Microsoft research scientist Frank Soong showed how his software could read out text in Spanish using the voice of his boss, Rick Rashid, who leads Microsoft’s research efforts. Hear Rick Rashid’s voice in his native language and then translated into several other languages: English: Spanish: Italian: Mandarin: In English, a synthetic version of Mundie’s voice welcomed the audience to an open day held by Microsoft Research, concluding, “With the help of this system, now I can speak Mandarin.” The new technique could also be used to help students learn a language, said Soong.

Should We Care About Grammar and Spelling on Twitter? | Media on GOOD Many people assume I am a guardian of grammar. The typical plane-ride conversation goes like this: “What do you do?”” “I am an English professor” “Oh! I better watch my grammar.” Their worries are unfounded. Nothing elicits comments like a story on grammar (are you composing your response to me right now? Language is a means to communication. All grammatical rules are like the one against split infinitives: They are all manmade. What interests me about grammatical and other “mistakes” on Twitter is what they signal about our changing culture—a thread of inquiry entirely absent in the Times article. Cusack’s misspelling indicates an out-moded keyboard layout, not a reigning illiteracy. We are living in a moment of seismic linguistic change, and attention should be paid—but not to errors.

shorthand "Groote" The Dutch shorthand system "Groote" was introduced in 1899 by A.W. Groote, aide to a Dutch general. Apparently he needed a system that he could use to take down the general's words while riding a horse! None of the existing systems worked because of the use of diacritical signs like dots. Simplify characters At the age of six I learned the v like this: It is not really complicated, but whoever invented the romantic pig tail at the end, did not have writing speed in mind. The k I found particularly difficult to master, especially with pen and ink, and being lefthanded. In shorthand I could have done those excercises must faster. While the ordinary v and k are very different, in shorthand they look much more the same. Write phonetically In Groote shorthand we write words phonetically. Write in one long stroke In Groote, each word is written without taking the pen from the paper. Use abbreviations For many often used words there are abbreviations. Leave out characters Example It says k-o-r-s-r-i.

Lexicon Valley on the common perception that some languages are spoken faster than others Listen to Lexicon Valley Episode #18: The Rate of Exchange. We’ve all known people who are deliberate, even plodding, talkers, taking their time with seemingly every word. And then there are those who spit out their sentences with barely a breath in between. You can also read the transcript of this episode below. You'll find every Lexicon Valley episode at slate.com/lexiconvalley, or in the player below: Send your thoughts about the show to slatelexiconvalley@gmail.com. BOB: From Washington D.C. this is Lexicon Valley, a podcast about language. MIKE: Hey Bob. BOB: Splendid, thank you. MIKE: I'm good. BOB: Can't think of a thing. MIKE: I wanna read first a recent review on iTunes from DrewInTN. BOB: I think Mike you really need to add, so this doesn't seem like a complete non sequitur and an insulting one, that that's a reference to our last show about Geoff Nunberg's book Ascent of the A-word, which is about the word asshole. MIKE: Right, and I wanna say one more thing about that show.

Filler (linguistics) In linguistics, a filler is a sound or word that is spoken in conversation by one participant to signal to others that he/she has paused to think but has not yet finished speaking.[1] These are not to be confused with placeholder names, such as thingamajig, which refer to objects or people whose names are temporarily forgotten, irrelevant, or unknown. Different languages have different characteristic filler sounds; in English, the most common filler sounds are uh /ʌ/, er /ɜː/ and um /ʌm/.[2] Among youths, the fillers "like", "y'know", "I mean", "so", "actually", "literally", "basically", "right", "I'm tellin' ya" and "you know what I mean?" are among the more prevalent. Ronald Reagan was famous for answering questions starting with "Well...". The term filler has a separate use in the syntactic description of wh-movement constructions. Among language learners, a common pitfall is using fillers from their native tongue. I don't care [how many angels] she told you she saw.

Expressions & Sayings Index If you prefer to go directly to the meaning and origin of a specific expression, click on its relevant entry in the alphabetical list below. Use this alphabet to speed up your search: A B C D E F G H I J K L M N O P Q R S T U V W X Y Z