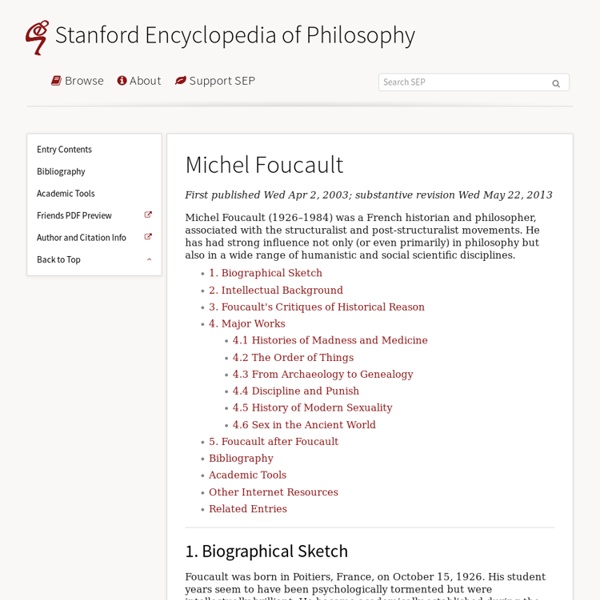 1. Biographical Sketch Foucault was born in Poitiers, France, on October 15, 1926. His student years seem to have been psychologically tormented but were intellectually brilliant. It can be difficult to think of Foucault as a philosopher. 2. Let us begin, however, with a sketch of the philosophical environment in which Foucault was educated. Although Jean-Paul Sartre, living and working outside the University system, had no personal influence on Foucault, the thought of him, as the French master-thinker preceding Foucault, is always in the background. Three other factors were of much more positive significance for the young Foucault. In a quite different vein, Foucault was enthralled by French avant-garde literature, especially the writings of Georges Bataille and Maurice Blanchot, where he found the experiential concreteness of existential phenomenology without what he came to see as dubious philosophical assumptions about subjectivity. 3. 4. 4.1 Histories of Madness and Medicine

To Contrast and Compare To Contrast and Compare [From Methodology and Fieldwork, edited by Vinay Kumar Srivastava (Oxford Univ. Press, Delhi, 2004)] The Necessity of Comparison Any social scientist should be aware that he is indulging in comparison all the time. of other social sciences, predominantly in space. of the historian is to take his own society as the norm and then to see how far the past is similar or different from this. anthropologist. sociologist. or economist tends to do, in the dimension of space rather than time. the subject, for even in his first piece of field-work the anthropologist is comparing the categories of his own society with those of the society he studies. . .' De Tocqueville's work illustrates such a method of comparison, revealed in his memoirs: 'In my work on America... though I seldom mentioned France, I did not write a page without thinking of her, and placing her as it "were before me. the United States, was not the whole condition of that foreign society, but revolution' (1956: 21 ).

untitled Wikipedia:Unusual articles This page is for Wikipedians to list articles that seem unusual. These articles are valuable contributions to the encyclopedia, but are a bit odd, whimsical, or something you would not expect to find in Encyclopædia Britannica. We should take special care to meet the highest standards of an encyclopedia with these articles lest they make Wikipedia appear idiosyncratic. This definition is not precise. To keep the list of interest to readers, each entry on this list should be an article on its own (not merely a section in a less unusual article) and of decent quality, in large meeting Wikipedia's manual of style. ) indicates a featured article. ) indicates a good article. Places and infrastructure[edit] Good golly, Miss Molly – jus' love your folly! Americas[edit] Africa[edit] Antarctica[edit] Asia and Oceania[edit] Europe[edit] See also Wikipedia:Unusual place names History[edit] Mathematics and numbers[edit] The day Sweden turned to the right side. Dates and timekeeping[edit] Language[edit] Art[edit]

6 Apps To Help You Focus & Be Productive [Mac] Advertisement I’m a multi-tasker. I’m not very good at it but I try very hard. If you’d suddenly spring up on me and took a look at my screen, it would often be very clustered with several applications running, work half done; not to mention having loads of screenshots and bookmarks on my desktop to remind myself of the tasks I have yet to complete. When it comes to increasing productivity, I try to organize myself by using to-do lists but planning only brings me one step closer to finishing my work. While writing the first two paragraphs, I checked my mail several times, fired up Safari, updated my Twitter and browsed Facebook. But deadlines are deadlines. To help with the situation and motivate me to clear the work that are currently pending, I’ve come up with 6 great (and free!) Distraction busters Yup, that’s right. To deal with distraction, I’ve come up with not one, not two but three applications. The first one probably needs no introduction. Distraction — busted! Pomodoro Timers

An Atlas of Cyberspaces - Cables and Satellites Communications Satellites | Introduction | Whats New | Conceptual | Artistic | Geographic | Cables & Satellites | Traceroutes | | Census | Topology | Info Maps | Info Landscapes | Info Spaces | ISP Maps | Weather Maps | | Wireless | Web Site Maps | Surf Maps | MUDs & Virtual Worlds | Historical | (© Copyright - Martin Dodge, 2007) Cable Viewer Viewing cable 06FUKUOKA9, NUCLEAR ENERGY POLITICS IN WESTERN JAPAN: KYUSHU ELECTRIC'S Understanding cables Every cable message consists of three parts: The top box shows each cables unique reference number, when and by whom it originally was sent, and what its initial classification was.The middle box contains the header information that is associated with the cable. It includes information about the receiver(s) as well as a general subject.The bottom box presents the body of the cable. The opening can contain a more specific subject, references to other cables (browse by origin to find them) or additional comment. This is followed by the main contents of the cable: a summary, a collection of specific topics and a comment section. Discussing cables If you find meaningful or important information in a cable, please link directly to its unique reference number.

The Scalp Industry Although the origins of the practice of scalping may be lost in the nebulous hinterlands of the past, the industry of scalp hunting has a specific and documented history. Although some of the particulars may be shrouded in rumors, the scalp bounty laws instituted a peculiar economic venture between the Mexican government and, primarily, American citizens. Between 1835 and the 1880s, the Mexican authorities paid private armies to hunt Native Americans, paying per kill and using scalps as receipts. The practice began when the Mexican government could no longer provide adequate protection to its citizens from the marauding Apaches and Comanches. The natives rode down from the U.S. killing peons, kidnapping women, and stealing livestock and then would escape back over the border. Bounty Laws Sonora was the first state to enact a scalp bounty law; in 1835, offering 100 pesos for the scalps of braves (with a peso roughly equal to an American silver dollar). After the Mexican-American War Bust